The Supply Chain Matters blog highlights December 2021 and Q4 global manufacturing and supply chain indices and challenges relative to product demand and supply network imbalance levels moving into 2022. While the tone seems to portray a turning of the corner, significant challenges remain.

Somewhat on the positive side, indices from Asian and developing countries indicate the beginnings of improvement in production output, and while optimism is returning, added challenges remain.

The J.P. Morgan Global Manufacturing PMI® report, a composite index produced by J.P. Morgan and IHS Markit, tracked sideways with a reported value of 54.2 for the month of December, unchanged from that of November. The overall average of this global index was 54.2 in the final quarter, closing up 0.4 percentage points from the December 2020 value of 53.8 that began this year. 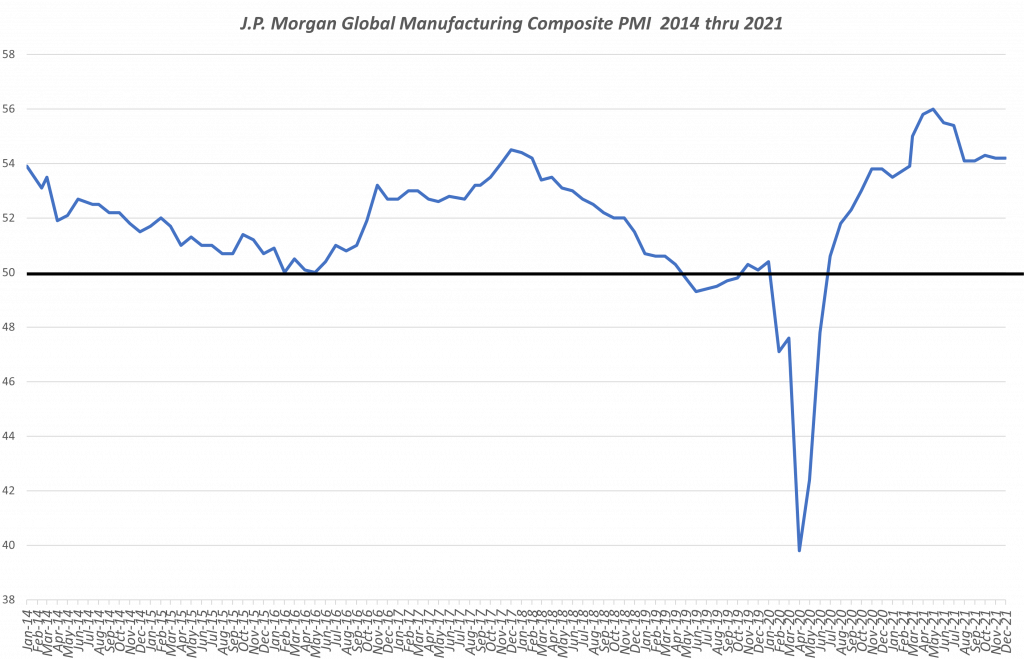 The separately published IHS Markit Manufacturing PMI™ reported a value of 57.7 for December reflecting a 0.6 percentage point decline from that November. The headline of this report indicated that output levels were muted with firms registering slower input in new orders, with input delivery delays being extensive. Backlogs of work, however, were noted as rising at the slowest pace in ten months, with the rate of output growth picking up slightly.

We further wanted to call reader attention to the U.S. Logistics Index™, a monthly survey compiled by five logistics researchers at separate universities analyzing logistics and transportation indices. The latest December 2021 reading of this index  was noted as 70.1, down 3.3 percentage points from the November reading. The headline of the report indicated that while growth was increasing at a decreasing rate for Inventory Costs, Warehousing Utilization and Warehousing Prices, growth levels were increasing at a pronounced rate for inventory levels. The report authors called special attention to data indicating that some supply chains may now be carrying too much inventory, trading off higher inventory levels to hedge needs to stock-up for the typically high demand holiday period. Further noted: “This could foreshadow a coming bullwhip effect in which supply chains over ordered to avoid shortages and are now dealing with the burden of having too much inventory—or too much of the wrong type of inventory.”

The IHS Markit Eurozone Manufacturing PMI® declined to a value of 58.0 in December, its lowest reading in ten months. The December value was 0.4 percentage point below the that reported for November, and 0.1 percentage point below that of October. Commentary noted a further easing of the supply chain crisis with modest alleviation in supply pressures and average leads times lengthening to the softest extent since February. The report additionally observed that ongoing efforts by Eurozone manufacturers to stockpile inventories have resulted: “with inventories rising at a rate which is unparalleled in over 24 years of data collection.”

Reflecting on the United Kingdom. The IHS Markit / CIPS UK Manufacturing PMI® dipped slightly in December to a value of 57.9, down from a three-month high of 58.1 recorded in November. Reportedly, output, new orders and employment levels rose while new export orders declined for the fourth running month. Panelists reportedly cited logistics and Brexit related challenges, along with the concern of further restrictions impacting export demand. December reportedly brought a substantial increase in average input prices with the rate of inflation among the steepest in this survey’s history, while companies passed on parts of such rising costs on to customers.

Manufacturing activity in Taiwan reportedly returned to growth in December with steeper increases in total sales amid stronger export demand. The IHS Markit Taiwan Manufacturing PMI ™ was reported as 55.9 for December, a 0.6 percentage point increase over November’s reading. This was depicted as the strongest improvement in four months amid higher new order intakes and improved demand conditions. That stated, the three-month average PMI for Q4 of 55.2 was 2.4 percentage points below the average of Q3, and 5.5 percentage points below the peak quarter of Q2. The middle quarter is traditionally when high tech and consumer electronics supply networks begin their lower tier ramp-ups of semiconductor and component production to support final quarter needs.

Of the four manufacturing regions that we tend to monitor (Eurozone/UK, Japan, United States and Taiwan), the average PMI value in Q4 turned out to be 56.9, which is the lowest average for all four quarters of 2021. We believe that this downward trending primarily in the second-half of 2021 is a likely result of the drag of continuous supply and transportation disruptions, elongated supplier lead times as well as workforce strains having a more discernable impact on this grouping.

We do not believe that the data reflects any direct impact of the new COVID-19 Omicron variant that is now raging across Europe, the United States, the United Kingdom and perhaps other countries. That is yet to be manifested in data.

The official manufacturing PMI compiled by the country’s Bureau of Statistics, which tends to be weighted toward large enterprises and state-owned manufacturers, rose slightly to a value of 50.3 for December, from the 50.1 reported for November and from the 49.2 reported for October. While the new orders index rose 0.3 percentage points in December, the index for export orders declined 0.4 percentage points. The overall average of this index for the three months of Q4 was 49.9, which was 0.1 percentage points below the average of Q3 and 1.1 percentages point below the average value of Q2. Ironically, the December 2021 ending PMI value that started this year was 51.9.

The Caixin China General Manufacturing PMI®, which is generally weighted toward smaller private manufacturers, was reported to rise back to expansion status with a reported value of 50.9 for December. That compares to the 49.9 value reported for November and 50.6 value reported for October. The report indicated that Chinese manufacturers experienced output increases at the quickest rate in 12 months supported by improved market conditions and stronger customer demand. Further noted in the December report were concerns related insufficient staffing levels from worker departures and retirement along with shipping delays and the ongoing global pandemic’s uncertain trajectory weighing on manufacturer confidence levels for the coming year.

Earlier this month, reports indicated that COVID-19 infections in manufacturing areas in the country’s Pearl River Delta, specifically the province of Zhejiang had more than a dozen Chinese manufacturers having to suspend production because of virus measures. More than 20 companies have had to temporarily suspend operations among the virus-hit areas.

A country of ongoing optimism is that of Vietnam, which has been the go-to country for businesses seeking to manage supply network risk exposure in China. The IHS Markit Vietnam Manufacturing PMI® rose to a level of 52.5 for December, its highest value during Q4.The December report cited solid increases in new orders, employment levels rising for the first time in seven months, and supply chain disruptions showing signs of easing.

The IHS Markit India Manufacturing PMI® report for December included the headline that India based manufacturers ended 2021 with strong gains in new business. The reported December PMI of 55.5 compared to a 57.6 value reported for November and a 55.9 value for October. The average Q4 PMI value of 56.3 was the highest in 2021, and a reflection of an improvement in overall operating conditions.

Of the six countries that we tend to monitor in this low-cost category (China, India, Indonesia, Mexico, Vietnam and Thailand) the overall average PMI value in Q4 was 51.7, a sign of expansionary movement, and the largest average in all of 2021. It would appear that this grouping of countries has managed to bounce back from setbacks related to both recurring COVID infection levels as well as supply chain and transportation disruptions.

From existing media reports, December’s and now Q4 2021 PMI data would indicate that industry and global supply chains may have turned the corner from a very challenging year.

We are not of that point of view.

While there are signs of easing in certain indices, there remains certain ongoing realities.

The now much more rapid spread of the Omicron variant of the virus has been a sudden wake-up call that this pandemic will remain as an ongoing challenge in relation to workforce and operational challenges. The economic consequences remain a big question mark in the coming months. Once more, supply chain focused operational, planning and other workers have become fatigued by the non-stop challenges and work arounds, and especially the demands of making the final quarter’s expected business outcomes.

As we have stated in prior commentary, the demand and supply imbalance of global-wide vaccines among low-cost manufacturing and emerging economies remains a growing concern for global supply chain management teams as is the growing realities of a lack of flexibilities in production and transportation capacity. COVID-19 infection spread, and associated factory restrictions will likely continue to impact production and shipping activity levels.

The likely presence of a bullwhip effect resulting in excess inventory is now being reflected in data from Europe and U.S. reporting and needs to be closely monitored. Supply Chain Matters has indeed been warning of this concern  and included so in our summary of September and Q3 PMI activity reporting. Entering the year 2022 with so many ships still backed-up in delivering goods ordered in 2021, prompts concerns that there may likely be an inventory overhang challenge that will need to be addressed

The bottom line is that much work remains in the coming year, not only from an operational, but in reexamination of existing practices in areas of supply network resiliency, supply chain talent retention, added agility in logistics and transport networks and other dimensions.

We want to close this commentary on a positive note, extending a shout-out to the collective global supply chain management community for their dedication and resourcefulness in overcoming an obvious challenging 2021 period of disruptions.