As if cascading global supply chain challenges were not already occupying the attention of businesses and supply chain management teams, there are now more industry-specific developments with potential consequences for industry demand and supply networks.

In the automotive manufacturing sector, a global-wide shortage of semiconductor devices has already been directly impacting daily production schedules among several global brands. This week provided the news that a fire at one of the world’s leading auto chip makers resulted in damaged equipment. The fire that occurred on Friday of last week damaged certain clean room facilities of a subsidiary of Renesas Electronics located northeast of Tokyo. A prior earthquake that occurred in this area in February had resulted in a multiday suspension of operations, resulting in reduced inventory levels.

According to published reports, it is estimated that it will require several more weeks before operations can be resumed. The CEO of Renesas indicated to reporters that the impact on global chip supplies would be significant. The industry concern is such that both Honda and Toyota have dispatched local workers to the Renesas facility to help in the production recovery effort.

The news of this fire resulted in the shares of Renesas dipping nearly 5 percent on Monday. Bloomberg has quoted an estimate from AlixPartners indicating that the industry could be impacted to upwards of $61 billion in lost sales this year.

During the severe earthquakes and resulting devastating tsunami that impacted Northern Japan in 2011. This same Renesas facility was severely impacted and reportedly offline for nearly three months. That resulted in an industry-wide supply shortage of micro-controllers needed in automobiles and trucks. 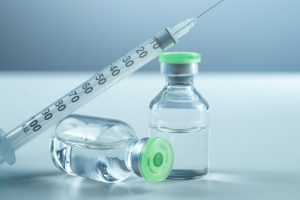 This week the European Union tightened curbs regarding the export of COVID-19 vaccines amid a growing third wave of infections now impacting multiple countries in the region. According to reporting by Bloomberg, the move is being interpreted as an effort to consider an individual nation’s vaccination rate and pandemic situation when deciding to approve vaccine shipments. Of controversy are vaccine import or export shipments to nations such as Britain with currently higher inoculation rates than other EU nations.

While the move is being interpreted toward controlling supplies of the AstraZeneca vaccine, other vaccine producers such as Pfizer are entangled in these resultant export restrictions and political interplays.

According to reporting by Reuters, thus far the EU has exported 43 million doses to 33 countries since the end of January. Estimates are that EU countries have administered vaccine to about 10 percent of their adult populations while Britain has administered at least one shot to overall half of its adult population.

Reuters reported this week that the government of India has placed a temporary hold on exports of the AstraZeneca vaccine produced at Serum Institute of India production complex as domestic infection rates in that country are again on the increase and requiring the need for added vaccine supply and administration to populations in that country.

From a global vaccine supply perspective, Ireland’s Prime Minister Michael Martin warned earlier this week that other vaccine producers such as Moderna, Johnson & Johnson along with AstraZeneca and Pfizer were collectively expressing concern that such export restrictions can have a cascading affect on supply of raw materials for global vaccine ingredient supply needs.

Once again, the interrelationships of common global supplier networks and the geopolitics surrounding vaccine delivery can interrelate into different consequences.

As if existing bottlenecks across global shipping and ocean container transportation were not enough, this week, a massive container ship ran aground in the Suez Canal, one of the globe’s major sea lanes, especially blocking ship traffic.

The vessel Ever Given, was sailing toward The Netherlands from China, when it ran aground and a result of high winds and a dust storm that provided blackout conditions. The position of the ship is such that it is blocking ship traffic in both directions. The vessel is owned by container shipping company Evergreen Line and considered to be one of the largest container ships currently operating.

The Suez Canal is both a crucial waterway for the transport of crude oil along with container ships. Reuters reports that more than 20 oil tankers have been affected by the disruption, while container line, A.P. Moller Maersk, indicated that four of its vessels were stopped in the canal system and three others were backed up waiting to enter the passage. Reuters, citing shipping sources, indicated that if delays continue, shipping firms may be forced to reroute vessels around Africa which could add any additional week to passage between Asia and Europe.

While U.S. West Coast ports remain stacked-up with vessels waiting to be unloaded, now the globe’s most crucial waterway is stacked-up as well.