With the majority of global wide procurement and manufacturing index (PMI) indices now reported, it is rather clear that global supply chain activity levels remained concerning by the end of 2019.

The J.P. Morgan Global Manufacturing PMI, a global-wide perspective, produced by IHS Markit, in association with ISM and IFPSM, reported a value of 50.1 for December, reflecting a 1.4 percentage point decline from the year-earlier period. The year-end number was marginally above the 50.0 contraction point. For the Q4 period, and 2019 as a whole, the average was 50.1. The below figure provides a five-year perspective on this particular index and its precipitous decline over the last 2-3 years. 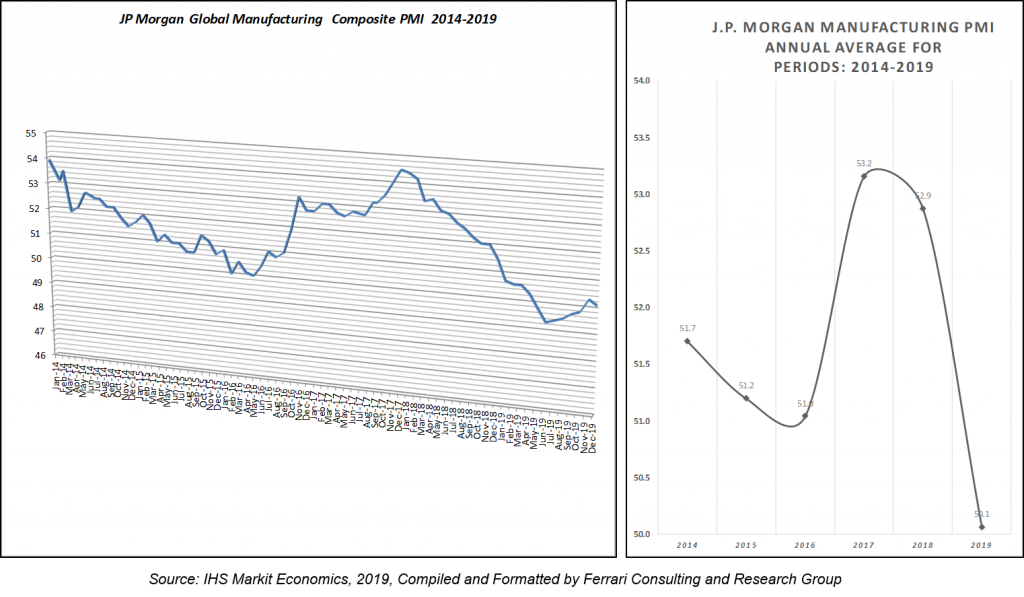 The latest report indicated: “PMI readings signaled contractions in the intermediate and investment goods sectors, with rates of deterioration accelerating in both cases.” That trend has persisted for most of the year and is not a positive indicator of future momentum as multi-industry supply chain teams enter planning in the year 2020. In essence, the manufacturing economy is being primarily driven solely by consumer buying.

There are additional concerns relative to Developed regions, in particular, the Eurozone and U.S. manufacturing regions.

The IHS Markit Eurozone Manufacturing PMI was reported as 46.1 in December, a significant 5.3 percentage point decline from the year-ago period. The overall PMI average for both the Q4 and Q3 time periods remained at 46.4. Here again, the report noted under  performance centered on intermediate and investment goods. Seven of the eight countries represented in the index recorded weaker numbers, with Germany, the regions prior manufacturing powerhouse, having recorded an unprecedented 43.7 PMI value in December. Commenting on the December report, the Chief Business Economist at IHS Markit indicated:

“Eurozone manufacturers reported a dire end to 2019, with output falling a rate not exceeded since 2012. The survey is indicative of production falling by 1.5% in the fourth quarter.”

The separate IHS Markit/CIPS UK Manufacturing PMI recorded a value of 47.5 for December, noted as the second-weakest level for almost seven-and-a-half years. The value was 6.7 percentage points below the same period one year earlier. The report authors further indicated that Brexit safety stocks were reduced with the downturn being felt the hardest by companies reliant on investment and business-to-business spending.

The December 2019 Manufacturing ISM Report on Business reported a PMI reading of 47.2 for the month of December, reflecting a 6.9 percentage point decline from the similar year-ago period. The December value was noted as the lowest reading since June 2009. During Q4, the General Motors labor strike weighed heavily on the U.S. index. The report’s headlines pointed to New orders, Production and Employment categories contracting along with Supplier Deliveries slowing at a faster rate.  Of the 18 manufacturing industries represented in the panel, only three reported growth in December. Boeing’s December announcement of a temporary halt to 737-MAX monthly production looms large entering the first part of year 2020, a further risk of declining manufacturing and supply chain momentum.

Japan, with a December PMI of 48.9, and Taiwan, with a PMI of 50 were both reflecting weak leading indicators.

All eyes remain on reported activity levels across China.

The Caixin China General Manufacturing PMI recorded a PMI of 51.5 for December. That number represented a 1.1 percentage point increase over the year-earlier period. The report authors pointed to a softer upturn in new business by the end of the year. The average PMI for all of 2019 was by our calculation, 50.6, managing to remain in modest growth. Reports indicate that most of that manufacturing growth is being driven by domestic consumer product demand.

The official Chinese government PMI, a value more weighted by state-owned manufacturing industry activity was reported as 50.2 in December, remaining just above the contraction point. A “phase one” agreement to ongoing U.S. and China trade war escalation is scheduled to be signed in mid-January. That stated, many believe that trade tensions among these two nations will continue.

The star among developing regions at year-end was that of India. The IHS India Manufacturing PMI for December was reported as 52.7 in December. The report headline indicated a solid rise in factory orders that boosted growth. Further noted was a marked pace of production output during the final month of 2019.

Manufacturing and supply chain activity in Vietnam moderated in the second half of 2019. The HIS Markit Vietnam Manufacturing PMI was reported as 50.8 in December. That number was 2.0 percentage points below the corresponding year-earlier period. Average quarterly PMI values steadily declined during each subsequent quarter of the year. That stated, the narrative to the December report indicated that new order growth had quickened to a four-month high.

A troubling area remains that of Mexico. The IHS Markit Mexico Manufacturing PMI was reported as 47.1 in December, which was 2.6 percentage points below the year-earlier period.  The latest report narrative indicated that manufacturing conditions went from bad to worse with rates of contraction among key sub-indices accelerating to the fastest rate in the nine-year history of the survey. Business sentiment had reportedly slipped to its lowest level on record, particularly concerning the automotive manufacturing sector. The re-negotiated USMCA Trade Agreement involving the former NAFTA countries is scheduled for U.S. ratification sometime later this month.  That new agreement should provide some boost to business and manufacturing activity levels in the year 2020.

Supply Chain Matters has continually highlighted that global operational indices have continually flashed contraction throughout 2019. The December year-end indices for the most part, reinforce that trend, especially for the major economic regions of China, the Eurozone and the United States.

As we advised in a late August commentary, teams need to be cautious and diligent in assumptions of expected product demand and subsequent supply commitments during 2020. The quantitative evidence now supports a reality that elevated geo-political tensions and ongoing trade and tariff actions have had a discernable cascading impact on global manufacturing and supply chain activity levels. As we pen this particular blog, tensions among the U.S. and Iran have heightened significantly after the reported assassination of Iran’s highest ranking military general.  Global oil prices are spiking on the news.

As stated in our Q3-2019 summary, if there is one important takeaway from the last global recession, it was that markets and supply networks can and will respond rather quickly to bad news. Today’s supply networks operate by just-in-time supply chain planning levels, Thus when product demand dramatically decelerates at a rapid rate, all tiers quickly feel the effects at just about the same time.

This remains a time for active supply and demand network risk mitigation. Planning cycles that require weeks of analysis and plan generation will not suffice, instead planning has to be a net-change, on the go process of continual ongoing analysis, insights and scenario-based preparation. High uncertainty definitely fosters needs for added agility in decision making and responsiveness.