In our last update reflecting on various reported Q2 indices, the numbers pointed to a noticeable upswing and we questioned as to whether there were signs of a turnaround. With the bulk of the August indices now reported, there remains an indicator of a “V” shaped response in overall production and supply chain activity levels. However with the virus continuing to show signs of a potential second wave activity among certain countries, particularly the United States, India, and some other countries, numbers should be viewed not as a sign of definitive recovery. 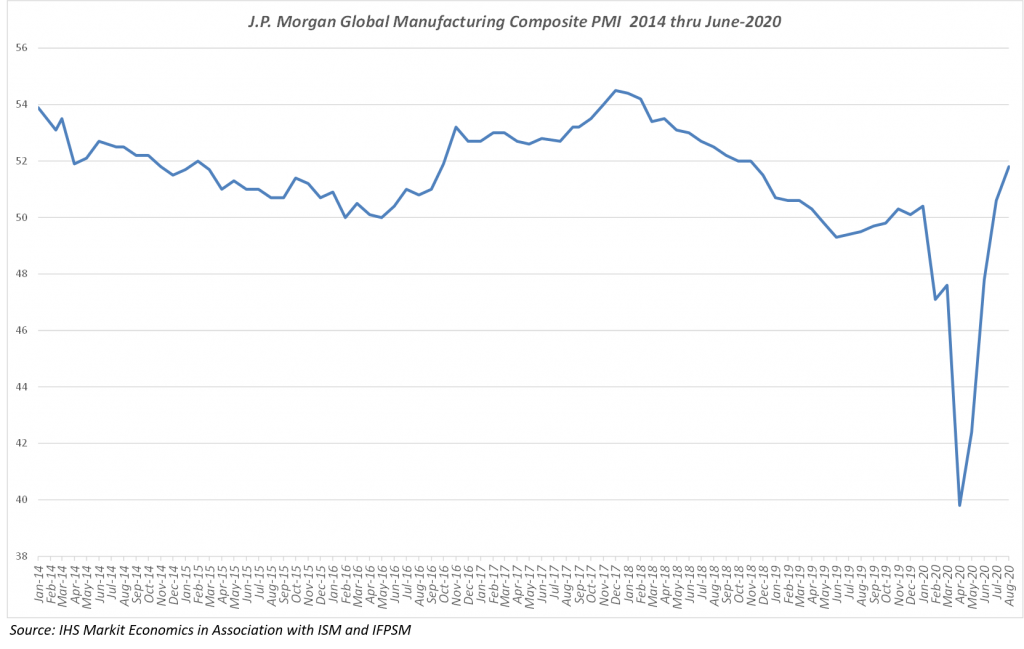 The J.P. Morgan Manufacturing PMI™, a reflection of a compendium of global wide indices had a reported value of 50.8 in August 2020 and was headlined as a 21-month high with output and new orders rising at the fastest rates since mid-2018. The August value follows a similar expansion value reported in July. The report authors pointed to output expansions occurring in China, Brazil, Germany, India, the United Kingdom and the United States. Steep contractions were reported for Mexico, Japan, the Philippines and Vietnam.  Of some concern was that input price inflation has risen to a 20-month record while downturns in manufacturing employment generally continue.

Noted by the report authors:

That statement is far reaching in that in prior activity reporting, consumer goods was the primary driver of global demand. Intermediate goods momentum is an area that many supply chain strategists have been closely monitoring for that as the indication of broader supply chain momentum.

A separate IHS Markit U.S. Manufacturing Index® reported a value of 53.1 for July, posting a 2.2 percentage point increase from July’s value. The difference among these two U.S. focused indices tend to be that ISM is a diffusion index predicated on survey respondent sentiments.

The IHS Markit Eurozone Manufacturing PMI® was again headlined to a return to growth, but with modest indicators. The August value was reported as 51.7 compared with a July value of 51.8. The authors noted that growth was widespread with consumer, intermediate and investment goods sectors registering improvement. Countries leading in PMI growth were noted as Italy, Ireland, Netherlands and Germany.

A continued pleasant surprise was the IHS Markit/CPIS UK Manufacturing PMI® that was reported as 55.5 for August, noted as a 30-month high.  That number was way above the 53.3 value reported for July. The report indicated that manufacturing output rose at the fastest pace since May 2014, with New Orders growth the fastest since November 2017.

Of the grouping of countries of this category that we monitor (China, India, Indonesia, Mexico, Thailand and Vietnam) the average PMI values for this grouping for August was 48.8 compared to the July average of 46.6, reflecting continued contraction levels but moving in a positive direction.

The standout for this grouping remained China, which has bounced back from being the original epicenter of the virus breakout in late December and early January. China’s official government derived PMI was reported as 51 for August, a 0.1 percentage point rise from July’s value. The Caixin China General Manufacturing PMI® which is more of a reflection of private industry reported a value of 53.1 in August compared to 52.8 reported for July. Noted in both narratives were indications of solid pace manufacturing expansion, primarily driven by government stimulus for domestic markets, and rising international demand for products related to COVID-19 such as protective equipment and supplies.  The Caixin index authors noted the first discernable increase in export orders since December 2019, which was pre-pandemic.

The IHS India Manufacturing PMI® which in July indicated an impact to business conditions related to virus lockdowns, was headlined in August as growth for the first time in five months. The August value of 52 reflected a 6-percentage rise from the 46-value reported in July. The latest report pointed to production growth driven primarily by domestic demand for consumer goods following the resumption of business and manufacturing operations. That stated, as we pen this commentary, India is now incurring an explosive rate of coronavirus infection levels across certain regions.

The IHS Mexico Manufacturing PMI® registered 41.3 in August and was headlined as business conditions deteriorating markedly as a result of continued virus infection. Manufacturing and supply chain conditions across Mexico amid prolonged closures have reportedly driven further deterioration in the country’s manufacturing sector.

The IHS Markit Vietnam Manufacturing PMI® incurred a setback, dropping to 45.7 in August from the 47.6 reported for July. The authors pointed to continued effects of COVID-19 leading to declines in production output and new orders, with the sharpest decrease coming from the intermediate goods sector.

A further index of mention was the IHS Markit Thailand Manufacturing PMI® which was reported as 49.7 in August and reflecting a 3.8 percent increase over July’s value. The report authors noted that the country’s domestic manufacturers reported a rise in output for the first time since January, with the rate of increase the fastest in ten months. Thailand is a hub foe automotive and high-tech intermediate components.

In our July commentary, our feeling was that industry supply chain management teams should continue to monitor signs of upward trending in intermediate and investment goods production categories, as well any ongoing disruptions or slowdown in activities caused by continued virus outbreaks. A further crucial determination are economic conditions among various global regions and sectors.

Another consideration that is now being put forth by economists and industry watchers are the noticeable effects of government stimulus and boosted unemployment benefits provided among certain economies such as the Eurozone sector and the United States. The notion is that the appearance of a manufacturing recovery remains an open question unless and until economic conditions and overall employment levels are such that the global economy can sustain itself with consistent growth. In goes with stating that a lot depends on whether COVID-19 infection rates can be dampened by added protective measures and the eventual presence of effective vaccines.

We continue to advise readers not to become enamored to a sustained “V” shaped recovery in supply chain activity levels. It remains best to focus on second-half product demand fulfillment and the important final quarter of what holiday demand will turn out to be. Opportunistic product demand driven by ongoing health, safety, or economic stimulus factors can well be responded to, but remain diligent to the overall economic picture.