In our last update reflecting on various reported June indices, the numbers pointed to a noticeable upswing and we questioned as to whether there were signs of a turnaround. With the bulk of the July indices now reported, there are more definitive signs of a “V” shaped response in overall activity levels. However with the virus continuing to show signs of a potential second wave among certain countries, particularly the United States, which now leads in global infection rates, caution is likely advised for industry supply chain teams. 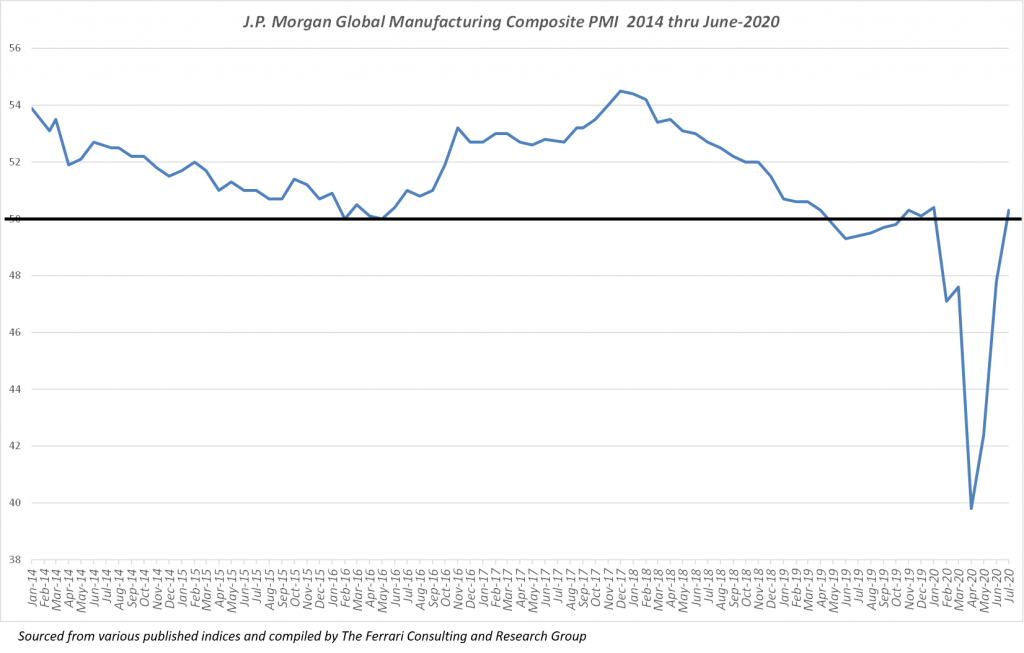 The J.P. Morgan Manufacturing PMI™, a reflection of a compendium of global wide indices had a reported value of 50.3 for July 2020 and was headlined as expansion for the first time since the beginning of 2020. The July index represented a 2.4 percentage point increase from that of June. That percentage of global-wide index growth was again rather significant, reflecting that global manufacturers are beginning to restore production levels. Noted by the report authors: “Although the rate of expansion was only mild it was nonetheless the sharpest since the end of 2018. Growth was registered in the US, China, the euro area, the UK, Brazil and Australia, among others.”

Equally important was indication that data pointed to output rising across consumer, intermediate as well as investment goods categories, albeit not in large numbers.

The IHS Markit Eurozone Manufacturing PMI® was headlined to a return to growth, with a July value of 51.8 for July. The authors noted that the zone’s manufacturing economy recorded its first growth in a year-and-a-half as output and demand continued to recover. Countries leading in PMI growth were noted as Spain, Austria, France and Italy.

A continued pleasant surprise was the IHS Markit/CPIS UK Manufacturing PMI® for July, which as headlined as a 32-month high in output growth. The July PMI of 53.3 represented a 16-month high. UK manufacturers linked the expansion to further loosening of lockdown conditions.

Of the four Developed Regions that we tend to monitor (Eurozone, Japan, Taiwan, United States) the average July PMI value was 50.5, an indication of expansion. The one exception was Japan, with the Jibun Bank Japan Manufacturing PMI reported as 45.2 for July.

The standout for this grouping remained China, which has bounced back from being the original epicenter of the virus breakout in late December and early January. China’s official government derived PMI was reported as 51.1 for July, a 0.2 percentage point rise from June’s value. The Caixin China General Manufacturing PMI® which is more of a reflection of private industry reported a value of 52.8 for July, a 1.6 percentage point increase from that of June’s value. Noted in the narrative was that July’s value was an indicator of operating conditions improving at the quickest pace since January 2011. Both indices together reflect a condition of continuing expanding activity including rising new order volumes.

The other indices we monitor in this grouping reflected a more subdued, contractionary level of activity.

The IHS Markit Vietnam Manufacturing PMI® was posted as 47.6 for July. 3.5 percentage points below the 51.1 reported for June. The authors pointed to setbacks as a result of COVID-19. Previously, it was reported that the pandemic had been brought under control.

The IHS India Manufacturing PMI® similarly indicated an impact to business conditions related to virus lockdowns. The July index of 46.0 fell from 47.2 in June and reportedly reflected a marked deterioration across the manufacturing sector.

Similarly, manufacturing and supply chain conditions across Mexico amid prolonged closures have reportedly driven further deterioration. The IHS Markit Mexico Manufacturing PMI® reported a value of 40.4 for July, compared to 38.6 in June.

Of the grouping of countries of this category that we monitor (China, India, Indonesia, Mexico, Thailand and Vietnam) the average PMI values for this grouping for July was 46.6, reflecting overall continued contraction.

In our June commentary, our feeling was that increased momentum was likely being driven from renewed pent-up demand for consumer-focused goods within specific regions. It was thus important for sales and operations planning and supply chain strategy teams to continue to monitor is upward trending in intermediate and investment goods production categories, as well any ongoing disruptions or slowdown in activities caused by continued virus outbreaks. Another crucial determination are economic conditions among various global regions and sectors.

While there remain some signs of optimism in terms of activity level, we advise readers not to become enamored to a sustained “V” shaped recovery in supply chain activity levels. Until there is solid sustained momentum, the task still remains one of continued monitoring and diligence. Global economic forecasts imply that significant storm clouds remain.

Right now, it is likely best to focus on second-half product demand fulfillment and the important final quarter of what holiday demand will turn out to be. Opportunistic product demand driven by ongoing health, safety, or economic stimulus factors can well be responded to, but remain diligent to the overall economic picture.