As Supply Chain Matters posted on Wednesday of this week, Supply Chain Disruptions Just Keep Coming, and so are the ramifications.

While the ongoing pandemic is a major Black Swan event, there is now the potential for another, the continued blockage of one of the world’s most critical waterways.

Specifically, a massive container ship ran aground in the Suez Canal, one of the globe’s major sea lanes and is now blocking ship traffic in both directions. The Evergreen Line vessel Ever Given was sailing toward The Netherlands from China, when it ran aground and a result of high winds and a dust storm that provided blackout conditions. The vessel is considered to be one of the largest container ships currently operating. 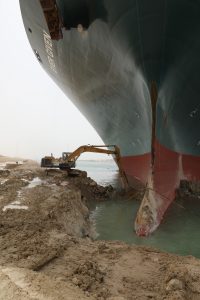 As we pen this update, Egyptian authorities and shipping officials are increasingly concerned that efforts to move the ship could likely take additional days.

It seems that the ship’s bow is wedged deep into one side of the canal with salvage specialists brought in now indicating that in order to free the ship, more fuel and containers may need to be unloaded from the vessel to reduce overall weight. According to a report by The Wall Street Journal, the only way to remove the containers may require the use of heavy lift helicopters. The WSJ polled more than a dozen shipping operators to estimate the value of cargo now stranded to be around $12 billion.

The latest estimates are that there are now upwards of 149 ships on both the north and southern ends of the canal that are all idle and awaiting the blockage to clear as of late Wednesday.

Container line operators Maersk and Hapag-Lloyd are activity assessing diverting vessels to sail around Africa, which could add in excess of a week to transit time to Europe, while other ship operators have already made the decision to do so. Maersk indicated in a statement that the ship operator is further considering all options, including air and rail for reaching destinations, but no decisions have been made.

A further ramification is that when the canal blockage is eventually cleared, there will be a large number of vessels heading to destination ports in Europe or in other Asian countries at the same time. That could well lead to the cascading occurrence of blocked ports as only a specific amount of ships can be loaded or unloaded at a given time. This has been the situation at U.S. West Coast ports since the beginning of this year, with lots of North America bound ships and limited staffing of ports to unload these ships.

Nikolaus Sievers, Vice President of Global Customer Success at Slync, previously had roles at Keuhne + Nagel commented on what comes next if this development drags out, indicating that LSP operators will try to make up for lost time while sorting through messy communications and finding and rerouting freight. According to Nikolaus:

“Carriers have a complex system for planning their service networks and schedules. If this is a three- or four-day issue, it could sort itself out fairly quickly. If this drags on over time, we could see a severe knock-on effect that will ripple all the way up the supply chain. In that scenario, there aren’t enough hours in the day for logistics operators to make up for lost time servicing shippers who are all fighting for the same limited resources and capacity.

One could easily point to the need for supply chain visibility, but in this case just about everyone can see the problem. It’s highly likely that shippers moving cargo from East Asia to Europe are right now sending frantic emails to their LSPs and carriers to confirm whether or not their cargo is affected, leaving those service providers to sort through piles of messy data and communications and take action based on what might or might not be delayed.”

American Shipper reported yesterday that the vessel Maersk Eureka, with a capacity of over 13,000 TEU’s is stopped at sea because of mechanical problem that occurred on March 12. The vessel departed Yokohama Japan on March 6 and was scheduled to arrive at the Port of Long Beach on Monday of this week. The ship was part of the Sequoia service that involves the 2M Alliance of named ship operators.

Reportedly a tugboat and some service technicians are traveling to the vessel which is idled 650 miles off Dutch Harbor, Alaska.  With repairs not expected to be completed until Wednesday of next week and with the threat of heavy seas expected, a tugboat will remain on standby. The vessel is now expected to be 15 to 20 days behind schedule depending on repairs being completed by next week.

The report cites shipping indicated that container cargo included exercise equipment, luggage, computer desks, fuel filters, hand sanitizer, pressure washers, patio furniture, and Nike branded shoes. This s likely a representative sample of goods that will be delayed and that supply chain and sales and operations planning teams will have to assess as to customer delivery delay impacts.

The significance is not just another container ship mishap, but a string of mishaps that have occurred over a period of months. That includes large amounts of containers falling overboard in heavy seas and other incidents of vessel breakdowns at sea. In January, a Maersk container ship sailing to the U.S. West Coast lost 750 containers in high seas. In December, the vessel One Opus, with a capacity of over 14,000 TEU’s lost over 1800 containers as stacks of containers shifted in heavy seas.

We mention this because there is likely another disruption theme occurring, that being the operating conditions of container ships not to mention the severe imbalance of available shipping containers because of the numerous cancelled sailings and accidents at sea.

It is not just a few companies and their supply chains being impacted; it is multiple industries including the transportation industry itself.

The applause of 2020 now runs the risk of being a completely different story for global supply chains.