The J.P. Morgan Global Manufacturing PMI® report, a composite index produced by J.P. Morgan and IHS Markit, remained unchanged with a reported value of 54.1 for the month of September. The report authors indicated that although output growth accelerated for the first time in five months, it remain subdued because of ongoing constraints. Growth reportedly continued across consumer, intermediate and investment sectors.

A significant summation of challenges occurring in September was depicted as:

“Efforts to raise production further were stymied by severe supply-chain and logistic disruptions. The past six months have seen supplier lead times lengthen to the greatest extents in the survey history.”

The increased drag on global supply chain activity levels is manifested by the average values for the quarter. For all of Q3, the average global PMI was 54.3, compared to an average of 55.8 in Q2. This 1.1 percentage drop is significant given the global scale of this index. 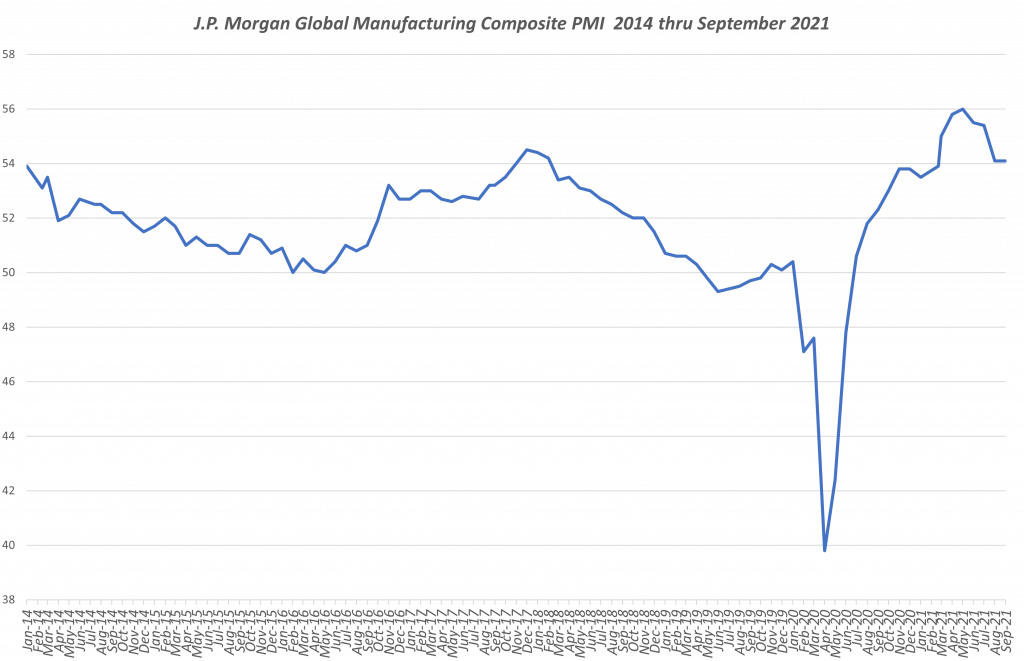 The IHS Markit Eurozone Manufacturing PMI® was reported as 54.1 in September, a 5.8 percentage point drop from the 61.4 value reported for August. Production growth slowdowns reportedly continued in September with acute inflationary pressures persisting as supplier leads times again lengthened. Report authors pointed to smaller nations such as Austria, Netherlands and Italy that encountered the greatest improvement in conditions in the final month of the quarter. On the other hand, Germany’s PMI slipped 4 percentage points compared to that August, which is significant.  The average PMI value for all of Q3 was 60.2, a drop of 2.2 percentage points from the average of Q2.

Regarding the September report, the Chief Business Economist at IHS Markit indicated in part:

“Supply issues continue to wreak havoc across large swaths of European manufacturing, with delays and shortages being reported at rates not witnessed in almost a quarter of a century and showing no signs of any imminent improvement.”

Rising supply chain disruptions reportedly resulted in a marked decline in PMI momentum for the United Kingdom. The IHS Markit / CIPS UK Manufacturing PMI® slipped to a value of 57.1 in September from the 60.3 reported in August. Vendor lead times reportedly increased to the greatest extent in this survey’s history amid reported delays in all forms of transportation. A highly visible shortage of truck drivers resulted in food supply shortages and panic buying of fuel supplies. That forced the government to consider the use of the military to assist in moving essential goods to respective destinations.

Manufacturers across the United States reportedly experienced unprecedented hurdles to meet increasing product demands. The September Manufacturing ISM© Report on Business was reported as 61.1, 1.1 percentage points higher than the August reading of 59.9. Survey panelists again reported that their companies and suppliers continue to struggle at unprecedented levels to meet increasing demand and that production and supply chain activity remains impacted by record-long raw-materials lead times, continued shortages of critical basic materials, rising commodities prices and difficulties in transporting products. The calculated average PMI value for Q3 was 60.2, a 0.9 percentage point drop from the average of Q2.

Of the four regions that make up this Developed category that we tend to monitor (Eurozone, United States, Japan, Taiwan), the average Q3 PMI was 57.8 in Q3 compared to 59.4 in Q2, a 1.6 percentage point drop.

There are two recognized gauges of China’s manufacturing activity and one slipped into contracting in September. The official manufacturing PMI compiled by the country’s Bureau of Statistics, which tends to be weighted toward large enterprises and state-owned manufacturers, fell again to a value of 49.6 for September, from the 50.4 reported for July and from the 50.1 reported for August. That value represented the first drop to a contraction level since February 2020, when the pandemic caused the lockdown of many state-owned manufacturers. The slowdown in manufacturing activity is being attributed to mandatory energy constrictions imposed on high energy consuming producers such as steel, rubber and plastic industries. Subindexes reporting on new orders and hiring also contracted.

The Caixin China General Manufacturing PMI®, which is generally weighted toward smaller private manufacturers, was reported to be at the neutral 50 mark in September from the 49.2 value reported for August. The report indicated that manufacturers experienced longer lead times for input materials while inventory levels were generally down. Input costs reportedly rose at a sharp rate in September.

A country of ongoing concern remains that of Vietnam, which has been the go-to country for businesses seeking to manage supply network risk exposure in China. The IHS Markit Vietnam Manufacturing PMI® remain unchanged at a value of 40.2 for September. The September report indicated that temporary business closures, transportation challenges and staff shortage all contributed to the fourth successive reduction in manufacturing output. a further sharp fall in production as the sector continued to be severely impacted by COVID-19 restrictions.

On the positive side, PMI indexes for India, Malaysia and Mexico showed some basis of optimism. The IHS Markit India Manufacturing PMI® rose from 52.3 in August to 53.7 in September with a reported stronger expansion in overall business conditions along with a described substantial pick-up in intakes of new work, including from international markets. A downturn among the Malaysian manufacturing sector while still impacted by new outbreaks of COVID-19, was reportedly less than that in August. While manufacturing activity in Mexico reportedly remained at contraction levels, the September number was 1.5 percentage points higher that the August value. The average PMI reading of 48.4 for Q3 was the highest since the Q1 of 2020, providing signs of optimism.

Of the six countries that we tend to monitor in this low-cost category (China, India, Indonesia, Mexico, Vietnam and Thailand) the overall average PMI value in Q3 was 47.9, compared to 51.3 for the Q2 period, reflecting a 3.4 percentage point quarterly contraction. This grouping clearly remains more impacted by the ongoing effects of the pandemic.

Supply Chain Matters Insights of the September and Q3 Data

September’s and now full Q3 PMI data once again reinforces that conditions will get worse before that get better.

The demand and supply imbalance of global-wide vaccines among low-cost manufacturing and emerging economies should remain a growing concern for global supply chain management teams as is the growing realities of a lack of flexibilities in production and transportation capacity. COVID-19 infection spread, and associated factory restrictions continue to impact production and shipping activity across certain parts of Asia.

With the cutoffs for manufacturing designated Q4 holiday focused products now accelerated because of severe global shipping delays, estimates are that Q4 PMI data will be muted. Candidly, we were surprised that the overall manufacturing PMI did not further decline in September, instead of remaining unchanged.