The August data further indicates that while product demand and order levels remain very robust, global supply chains continue to be hampered by multi-tiered capacity constraints, exploding input costs, price inflation, as well as record breaking supplier lead times. There are added signs that production activity across Asia is faltering due to the ongoing restrictions brought about by new variants of COVID-19 across areas of Asia that have resulted in continued workforce restrictions, factory disruptions and consequential reductions in factory and supplier output.

The J.P. Morgan Global Manufacturing PMI® report, a composite index produced by J.P. Morgan and IHS Markit eased to a six-month low with a reported value of 54.1 in August, compared to the July value of 55.4.  As noted in the figure below, the global slowdown is far more discernable in the graph slope. 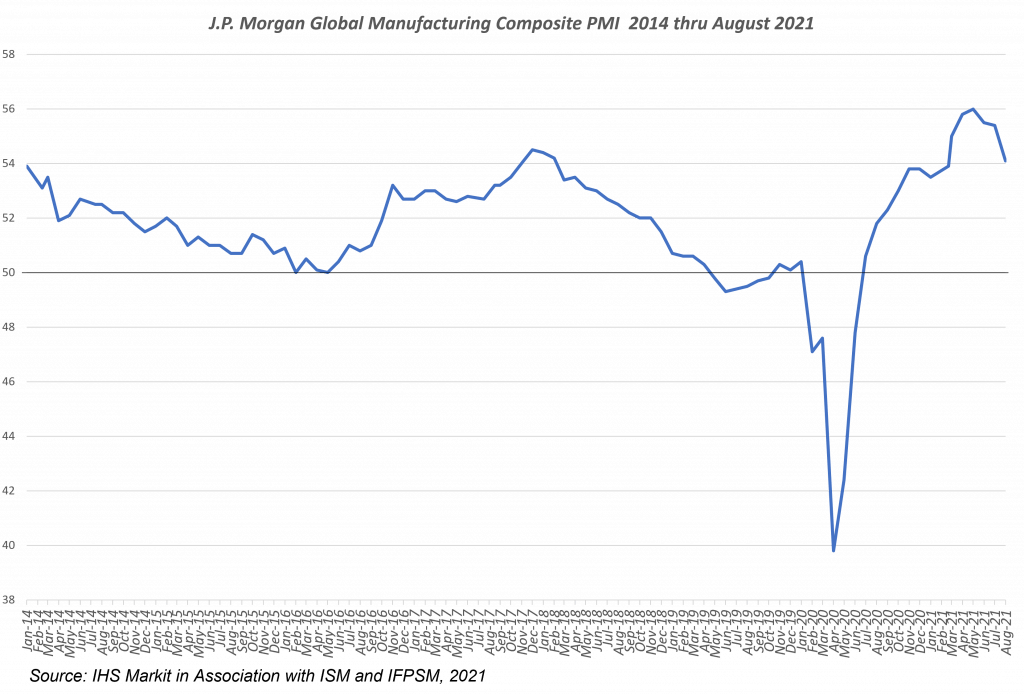 A significant summation of challenges occurring in August was depicted as:

“Supply chain disruption remained severe in August. This was highlighted by a further marked increase in average vendor lead times, with the extent of the lengthening staying close to June’s series record.”

Eurozone manufacturing growth reportedly slowed to a six-month low in August with the pace of growth being noted as the weakest in six months but well above the historical average. On a positive note, the August report indicated that Italy and Spain observed accelerated expansions while Greece experienced its highest reading in manufacturing PMI since April 2000.

Rising supply chain constraints reportedly led to slower production growth across the United Kingdom coupled with rising input prices. Manufacturing output grew at the weakest rate in six months. Highly visible supply chain shortages as manifested in Britain’s mainstream and social media included global fast-food restaurant chain McDonalds apologizing because of the inability to serve milkshakes across the region while the Wetherspoon pub chain apologized after certain varieties of beers were not available to patrons. Truck driver and staffing shortages were consistent themes.

One gauge of China’s manufacturing activity slipped into contracting in August. The Caixin China General Manufacturing PMI®, which is generally weighted toward smaller private manufacturers, slipped below the neutral 50 level to 49.2 from the 50.3 reported for July and from the 51.3 value reported in June. Reportedly respondents frequently cited upticks in COVID-19 infection levels and subsequent restrictions have led to dampened demand and greater difficulties sourcing input materials. Lead times reportedly increased to the greatest extent since February. The official manufacturing PMI compiled by the country’s Bureau of Statistics, which tends to be weighted toward large enterprises and state-owned manufacturers, fell again to a value of 50.1 from the 50.4 reported for July and from the 50.9 reported for June. A published report by Reuters commenting on the latest government published data indicated that momentum had weakened due to domestic COVID-19 outbreaks, high raw material prices, slowing exports and stricter government measures. PMI data reflected that demand had reportedly slipped sharply with the new orders index falling to the lowest level this year. There was also a marked downturn in China’s services sector which reportedly drove that index into sharp contraction, the first time since the pandemic had peaked in February of 2020. Some economists are indicating that the data from China may be an indicator of declining export demand for Asian goods during the remainder of the second-half of this year.

A country of increasing concern remains that of Vietnam, which has been the go-to country for businesses seeking to manage supply network risk exposure in China. The IHS Markit Vietnam Manufacturing PMI® fell to 40.2 in August from the 45.1 reported for July. The August report made indication of the worst outbreak of the COVID-19 virus since the pandemic began. Manufacturers in the country continue to be especially impacted with reports of employees sleeping at certain production sites to maintain some form of production. Vaccination rates in the country remain the lowest in Asia.

Similar to Vietnam, PMI indexes for Indonesia, Mexico, Malaysia, Philippines and Thailand reflected PMI readings below the 50-level with many making mention of virus impacts on worker populations and facilities.

The demand and supply imbalance of global-wide vaccines among emerging economies should remain a growing concern for global supply chain management teams as is the growing realities of a lack of flexibilities in production and transportation capacity because of ongoing disruptions and supplier constraints.

In a previously published Supply Chain Matters editorial perspective, we opined how the now more visible realities of the state of global supply chains is a time for supply chain management and business leaders to address obvious business realities, set prudent expectations and take a step back to address the bigger picture.

The bigger picture is a renewed focus on addressing supply network resiliency, product management strategies and the ongoing physical and mental health of work teams.  The brute reality is that it is going to take additional months for multi-industry supply chain management teams to realistically align product demand with available supply from multiple planning process and resource dimensions.