Somewhat on the positive side, indices from Asian and developing countries indicate a welcomed improvement in production output as efforts to vaccinate populations and remove factory restrictions related to the latest variants of COVID-19 now begin to take effect.

The J.P. Morgan Global Manufacturing PMI® report, a composite index produced by J.P. Morgan and IHS Markit, remained little changed with a reported value of 54.3 for the month of October, a 0.2 percentage point increase from the September value. 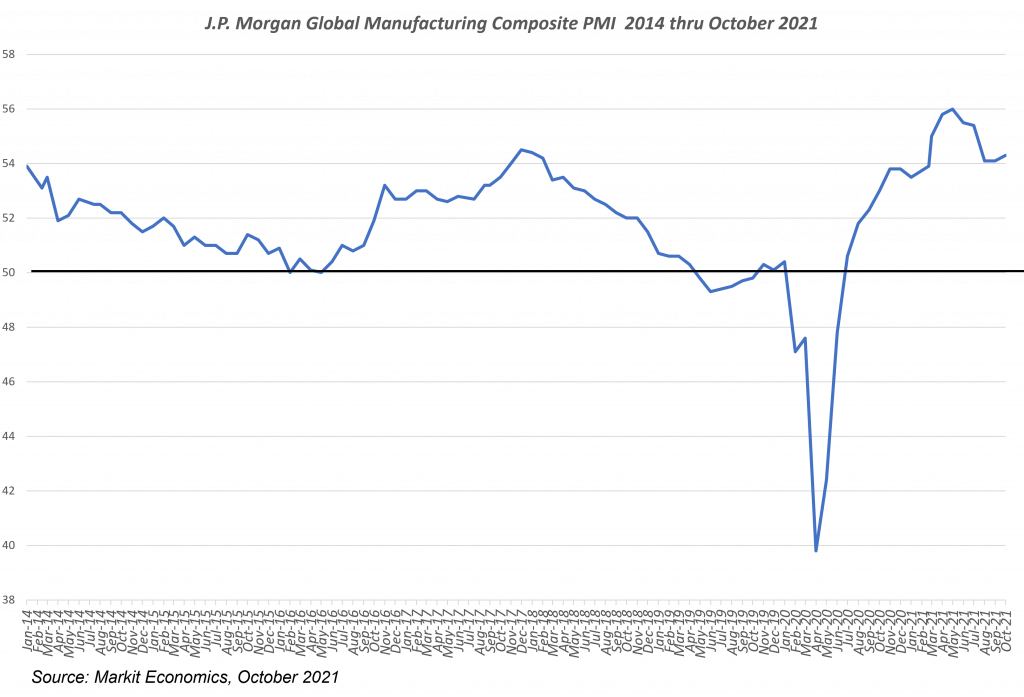 The report authors indicated that expansion of global wide manufacturing production was the weakest in the past 16-month period. Growth reportedly has been stymied by ongoing substantial disruptions in raw material flows, rising cost inflation and a near stalling of international trade flows.

Of the 31 nations which comprised October’s data, all but two, Mexico and Myanmar, registered readings above the 50 no-change mark The top five countries in terms of supply chain expansion were noted as Netherlands, Ireland, Italy, Austria and Greece.

A significant summation of challenges occurring in October was depicted as:

“The impact of supply chain issues filtered through to price inflation during October. Input costs increased at the fastest pace in over 13 years, while average output charges rose to the greatest extent on record.”

The IHS Markit Eurozone Manufacturing PMI® rose to a value of 58.3 in October, a 4.2 percentage point increase from the 54.1 value reported for September. Commentary noted that supplier delivery times lengthening to one of the most severe extents on record. Reportedly, input costs and output price inflation surged to new survey highs. Report authors noted that PMI levels for Germany and France, two manufacturing powerhouses, declined to nine-month lows in October

Manufacturers across the United States reportedly continued to experience unprecedented hurdles to meet increasing product demands. The October Manufacturing ISM© Report on Business was reported as 60.8, reflecting a 0.3 percentage point decline from that of September. The prices index increased 4.5 percentage points from September.

The two recognized gauges of China’s manufacturing activity both reflected a noticeable slowdown in manufacturing activity levels. The official manufacturing PMI compiled by the country’s Bureau of Statistics, which tends to be weighted toward large enterprises and state-owned manufacturers, fell for a second-straight month from a value of 50.1 to 49.6 for October. That value represented the lowest since the outbreak of the global pandemic in February 2020. Widespread mandatory intermittent electric power shortages and localized virus impacts have hampered the country’s manufacturing sector. New and export orders indexes remained at contraction levels.

The Caixin China General Manufacturing PMI®, which is generally weighted toward smaller private manufacturers eased up to 50.6 in October. 0.6 percentage points above the level reported in September. The report indicated that despite rises in new work, manufacturers encountered a third successive monthly decline in production levels. Average lead times for input materials reportedly increased at the fastest rate since March 2020.

In October, the Chinese government reported that the country’s economy grew 4.9 percent in the third quarter, a dramatic decline from the 7.9 percent growth rate reported for the second quarter. Reportedly the scale of the slowdown was sharper than expected and has raised additional concerns regarding supply chain challenges, the country’s-imposed energy cutbacks, and troubling signs in the country’s real estate debt arena.

A certain sigh of relief in global sourcing was likely expressed as manufacturing conditions across Vietnam returned to growth territory. . The IHS Markit Vietnam Manufacturing PMI® climbed to a value of 52.1 for October following a 40.2 reading in September. The October report indicated an improvement in the public health situation with easing of restrictions on the nation’s factories. Reportedly, expansions were noted for output, new order growth and purchasing activities. However, issues around staffing remain a concern with widespread reports noting that workers remain in the home regions following the widespread virus outbreaks.

Manufacturing PMI indexes for India, Indonesia, Thailand and Malaysia were reported above the 50 mark

The IHS Markit India Manufacturing PMI® for October reflected the quickest pace of manufacturing activity in eight months. The October reading of 55.9 for October exceeded the 53.7 reported for September, with a reported stronger expansion in both orders and production across consumer, intermediate and investment goods areas.

Of the six countries that we tend to monitor in this low-cost category (China, India, Indonesia, Mexico, Vietnam and Thailand) the overall average PMI value in October was 52.7, compared to 48.9 for the September period. From our lens, this 3.8 percentage point increase is an indicator of a recovery of manufacturing activity as economies begin to return to expansionary activity.

With global shipping and major U.S. and European ports continuing to be overwhelmed with volume overloads and excessive delays, compounded with air cargo movements operating at maximum capacity, the prospects for any improved global volume flows during the final quarter of 2021 are muted.

As a host of global manufacturers and retailers report their latest quarterly financial performance, the picture of supply chain chaos and economic is becoming very clear. Consensus expectations are now of the view that ongoing supply chain disruptions, elongated supplier lead times and inflated inbound costs will extend into the first half of 2022 and possibly later for some areas. Global financial markets are growing increasingly concerned about the effects of growing inflation and higher prices potentially provided added headwinds for future economic growth.

The Wall Street Journal reported earlier this week (Paid subscription required) that uncertainty surrounding the inflexibilities of global supply chains are now driving executives to shift supply network links from lower cost regions to locales that afford more control in an uncertain global landscape. Some are leaning back to being closer to major customer centers while controlling their own near-shored manufacturing operations.

As noted in our last commentary related to global output, the bigger picture indeed remains a renewed focus on addressing supply network resiliency and exposures to areas of risk.