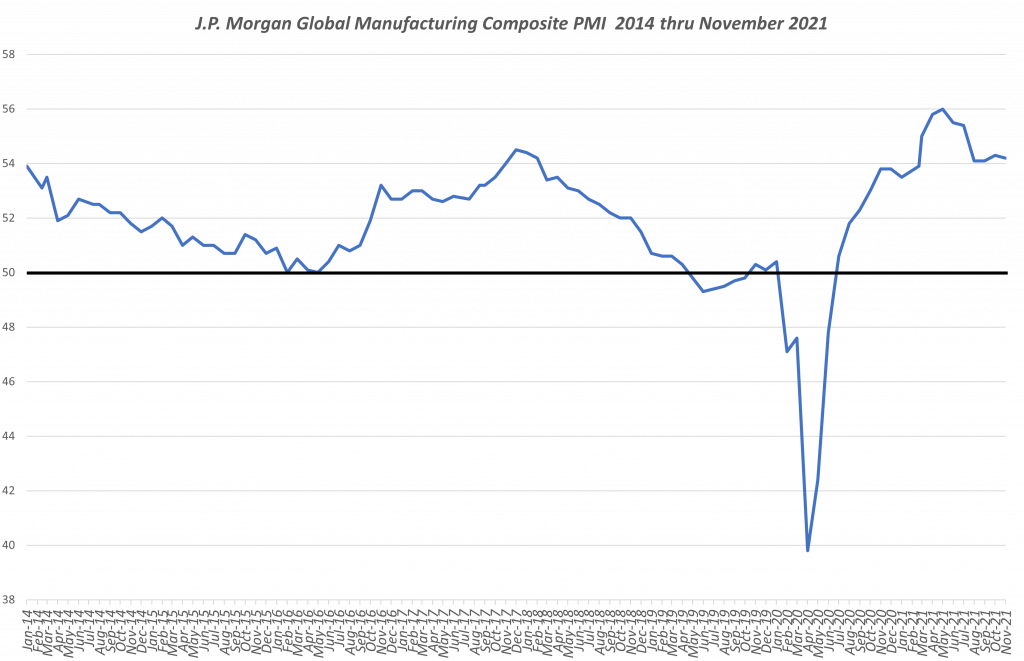 The J.P. Morgan Global Manufacturing PMI® report, a composite index produced by J.P. Morgan and IHS Markit, edged down slightly for the month of November to a value of 54.2, a 0.1 percentage point increase from the October value.

The report authors indicated that global output, new orders, employment and stocks of purchases expanded in November. Caution was noted for the category of new order growth. Vendor lead times were noted as lengthening sharply once again.

Of the 30 nations which comprised November’s data, 26 reflected a state of expansion and four, including China, a state of contraction. The top five countries in terms of supply chain expansion were noted as Italy, Netherlands, Ireland, Australia and Greece.

The report did note that the outlook for global manufacturing sector remained positive in November, with companies optimistic that production levels would be higher next year.

The IHS Markit Eurozone Manufacturing PMI® rose again to a value of 58.4 in November, a 4.3 percentage point increase from the value in September. Europe remains a bright spot in manufacturing expansion despite ongoing COVID-19 restrictions. That stated, price inflation established a new record and supplier delivery times lengthened again to the most severe extents on record. Reportedly, “to alleviate pressures on margins, output prices were raised to the greatest extent since this series began in November 2002.”

Output growth slowdowns and significant supply chain headwinds once again impacted PMI momentum for the United Kingdom. While the IHS Markit / CIPS UK Manufacturing PMI® rose 0.7 percentage points to a value of 58.1 for November, the report headline was that manufacturing input prices rose to a 30-year survey record. Reportedly, input demand continues to outstrip supply. Selling prices were noted as rising at a rate close to October’s record highs. New export orders reportedly worsened with weaker demand from China and with disruption of trade with the European Union.

Manufacturers across the United States reportedly continue to experience unprecedented hurdles to meet increasing product demands. The November 2021 Manufacturing ISM© Report on Business was reported as 61.1, reflecting a 0.3 percentage point increase from that of October. The New Orders sub-index increased 1.7 percentage points while the Production Index increased 2.2 percentage points for the month. The Prices index reportedly expanded for the 18th consecutive month albeit at a slower rate. Labor shortages were cited among multiple survey panelists.

The separate IHS Markit US Manufacturing PMI was headlined with an 11-month low amid softer demand and material shortages. This index posted a value of 58.3 for November, the lowest since December 2020. Report authors noted that continuing sales growth is significantly outpacing production growth, with signs of stockpiling on the part of manufacturing customers. Signs of new order growth declines were attributed to material shortages and signs of push-back from customers relative to steep price increases.

Of the six countries that we tend to monitor in this low-cost manufacturing category (China, India, Indonesia, Mexico, Vietnam and Thailand) the overall average PMI value in November was 52.3, compared to 52.7 for the October period. That average compares to the 48.6 for all of the Q3 period, indicating that some recovery remains underway.

The two recognized gauges of China’s manufacturing activity reflected a contrasting picture of production and supply chain activity. The official manufacturing PMI compiled by the country’s Bureau of Statistics, which tends to be weighted toward large enterprises and state-owned manufacturers, rose 0.9 percentage points to a value of 50.1 in November. That value moved the index back to expansion conditions. Keep in mind that October’s value of 49.2 represented the lowest since the outbreak of the global pandemic in February 2020, reflecting widespread mandatory intermittent electric power shortages and localized virus impacts have hampered the country’s manufacturing sector. The November report was reportedly more optimistic relative to past disruptions. However, new orders reportedly were subdued.

The Caixin China General Manufacturing PMI®, which is generally weighted toward smaller private manufacturers dipped back to contraction at a reported value of 49.9 for November. The report indicated that three of five PMI components, New Orders, Employment and Supplier Delivery Times dragged down this index Described was that subdued customer demand, rising costs and limited power supplies at some firms dampened overall growth.

While October data provided some signs of relief for manufacturing conditions across Vietnam, caution remains. While the IHS Markit Vietnam Manufacturing PMI® climbed to a value of 52.2 for November following a 50.1 reading for October, the latest report was laden with cautions. Noted was a rise in COVID-19 cases, growth stymied by ongoing labor shortages and intensifying inflationary pressures. While Vietnamese manufacturers were reportedly able to expand production in November, labor shortages continued to be a challenge because of worker concerns related to returning to factories. Backlogs of work consequently increased for the third month running.

Manufacturing PMI indexes for India, Indonesia, Thailand and Malaysia were again reported above the 50 mark

The IHS Markit India Manufacturing PMI® for November increased 0.7 percentage points to a value of 57.6. This was reportedly the strongest improvement in the health of India’s manufacturing sector for the past ten months. Factory orders rose for the fifth successive month with domestic demand fueling the bulk of growth.

Manufacturers across Mexico continue to be challenged from the affects of COVID-19, input cost inflation and lingering supply chain disruptions. The IHS Markit Mexico Manufacturing PMI® for November was little changed at 49.4 amid what was described as severe input delivery delays, particularly from Asia and Europe. The November report further pointed to deteriorating business confidence among manufacturers amid cost inflation and raw material scarcity.

As noted in our October perceptions of global manufacturing indices, expectations remain of the view that ongoing supply chain disruptions, elongated supplier lead times and inflated inbound costs will extend into the first half of 2022 and possibly later for some industry sectors. Global financial markets are growing increasingly concerned about the effects of growing inflation and higher prices potentially provided added headwinds for future economic growth. The term “transitory” inflation is now being downplayed and replaced by the term supply-chain driven inflation.

We remain of the view that 2022 will present a continued reevaluation of global wide production sourcing strategies under the umbrella of supply network risk mitigation. The bigger picture indeed remains a renewed focus on addressing supply network resiliency and exposures to areas of risk.

More on that when we shift our editorial attention to our forthcoming 2022 predictions series.