Global Production and Supply Chain Activity Levels Rise in June- Is This a Sign of a Turnaround?

With the majority of June’s global PMI indices now reported, it appears that global manufacturing and supply chain activity has begun a discernable rise. The question on many minds may likely be whether this is the initial sign of a turnaround.

Whether this sign of growth sustains itself is obviously highly dependent on whether the COVID-19 virus levels are minimized, and whether multi-industry supply chain chains can continue to overcome ongoing product demand and supply network disruptions.

Obviously, some industry sectors are faring better than others. Those that are supporting healthcare response and delivery demands are continuing to struggle. 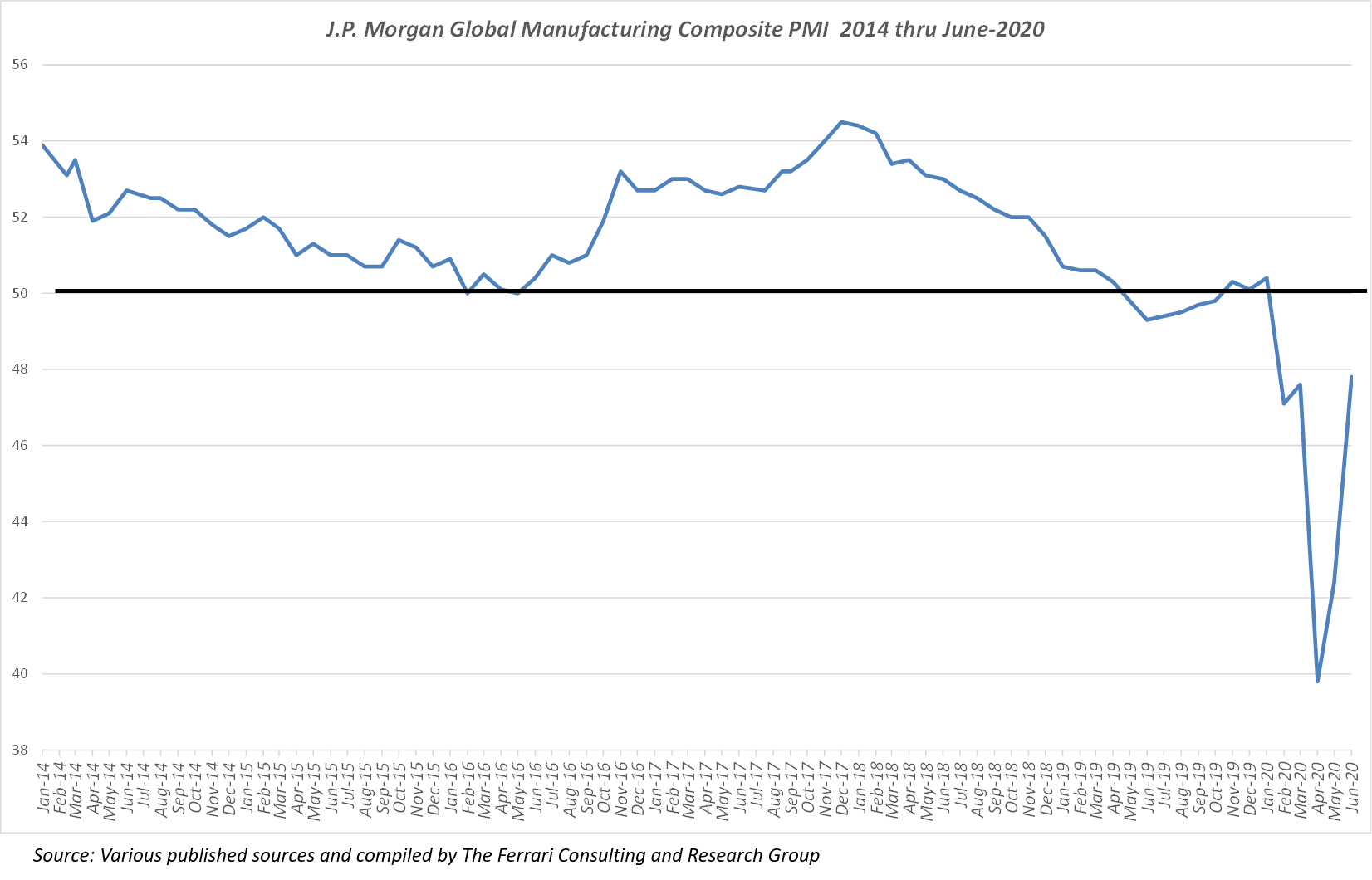 The report authors indicate that in June, expansion conditions were reported for 15 out of 32 countries recorded in this index. Growth was registered in Brazil, China, France, Italy and the United Kingdom.  Output, New Orders and New Export Orders registered steep gains in June. While the June report reflects some optimism, for the second quarter as a whole, the overall average was 43.2, a rather subdued level that remains well below the global growth indicator.

Among Developed Economies indices, the Manufacturing ISM® Report on Business® an index of U.S. wide manufacturing and purchasing activity was reported as 52.6 and reflecting a 9.5 percentage point increase from that May. The authors noted that the growth cycle returned after three straight months of COVID-19 disruptions. The June value was the highest reported in the previous 12 months, which is additionally significant. Of the 18 manufacturing industries tracked in this index, 13 reported growth in June. The leading indicator New Orders index rose by 24.6 percentage points which is rather astounding for a single month’s activity. Likewise, the Production Index rose by 24.1 percentage points and the Backlog of Orders index rose by 7.1 percentage points.  A separate IHS Markit U.S. Manufacturing Index® was reported as 49.8 in June, posting a 10-percentage point increase from May’s value. The headline of this latter report reflected that contraction in output had slowed amid looser virus restrictions.

The IHS Markit Eurozone Manufacturing PMI® was also headlined as moving toward stabilization. The June value of 47.4 reflected a 6-percentage point increase from that of May. While intermediate and investment goods production contracted, the report points to consumer goods production returning to growth. The authors further indicated that all countries recorded relative improvements in activity.

A pleasant surprise was the IHS Markit/CPIS UK Manufacturing PMI® for June, which was reported as 50.1, a nearly 10 percentage point increase from that of May’s value. Perhaps the country-wide virus lockdowns and Brexit did not defeat United Kingdom manufacturers.

If is worth noting that both the U.S. and Eurozone PMI indices incorporate production from the commercial aerospace sector. With both Airbus and Boeing significantly cutting back monthly production volumes because of the severe disruption to the global airline industry, one would have believed that this would have dampened PMI activity for both of these major regions.

Of the four Developed Regions that we tend to monitor (Eurozone, Japan, Taiwan, United States) the average three-month Q2 PMI value was 42.3 compared to Q1’s average PMI value of 48.8, a 6.5 percentage point gap. There is still a long way to go.

The standout for this grouping is clearly China, which has bounced back from being the original epicenter of the virus breakout in late December and early January. China’s official government derived PMI was reported as 50.9 for June, a 0.3 percentage point rise from May’s value. The Caixin China General Manufacturing PMI® which is more of a reflection of private industry reported a value of 51.2 for June, a 0.5 percentage point increase from May. Noted in the narrative was that June’s value was the strongest recorded since the end of December 2019. Both indices together reflect a condition of expanding activity including rising new order volumes.

The other standout region was Vietnam where the headline was manufacturing output returning to growth. The IHS Markit Vietnam Manufacturing PMI® was posted as 51.1 in June, an 8.4 percentage point rise from May’s reported value. Reportedly, the COVID-19 pandemic has been brought under control in the country with both consumer and intermediate goods sectors posting expansions in order demand. That stated, the authors indicate that is continued evidence of spare capacity in the sector.

Of the remaining countries of this category that we monitor (India, Indonesia, Mexico and Thailand), each reflected subdued activity levels in June and for the quarter. Of the lowest, Mexico was reported as 38.6, Indonesia was reported as 39.1, Thailand reported as 43.5.  Of final mention is India’s index which was reported as 47.2 for June, a whopping 16.4-point increase from that May, as that country eased from country-wide lockdown conditions.

Of the above grouping of Developing nations, the average PMI values for Q2 turned out to be 45.1, which was 3.9 percentage points below the Q1 pre-pandemic level.

In the likely surprises category are Malaysia, Myanmar and the Philippines, whose individual indices rose significantly in June over both April and May levels. These may be indicators of heighted demand for medical personal protection and high-tech related products. This could further be an indicator of a spurt for lower-tier intermediate goods demand.

Economists will likely be drilling into each of these indices to determine specific trending and indicators of any sustained manufacturing momentum economy in the second half of this year. Their will likely be viewpoints or estimates as to whether Q2’s data points to the beginnings of a turnaround towards either a “V” , a “W”, or some other recovery tract.

From our lens and experience in monitoring these indices and sub-indices ( we are not an Economist firm), it would appear to us that the June momentum is likely being driven from renewed demand for consumer-focused goods within specific regions. An area to continue to monitor is upward trending in intermediate and investment goods production categories. They are the reflection of global supply network momentum. Until both of these areas reflect solid sustained momentum, the task remains one of continued monitoring.

For multi-industry supply chain management, procurement and logistics teams there are two takeaways to ponder:

The first is that your collective efforts in responding to this unprecedented disruption are showing results. Job Well Done!

The second is caution, in that one month does not necessarily reflect solid evidence of momentum. There are likely more disruptions to anticipate in the coming months, so stay strong and vigilant to the inevitable trials that remain. Stay the Course!