As April 2021 nears its close, events and developments point to production mishaps, an ongoing challenge related to one particular contract manufacturer, a growing imbalance of vaccine supply and availability globally, and the first report of the existence of counterfeit vaccine supply. 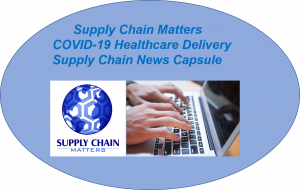 Earlier this month we alerted readers the news of a manufacturing blunder that occurred at a U.S. based contract manufacturing facility that caused a lot of 15 million doses of Johnson & Johnson’s COVID-19 vaccine to ruin. Such news was rather disappointing, not only for those in the U.S. seeking to be vaccinated, but for Johnson & Johnson as well.

The development involved the Baltimore based production facility operated by Emergent BioSolutions which had contracts to produce both the Johnson & Johnson and AstraZeneca developed vaccines. In what is being cited by government regulators as human error, a batch of the J&J vaccine was accidently conflated as one of more workers reportedly confused the ingredient mix among the two vaccines.

The initial good news was that the error was discovered prior to lots being shipped, the hope was that Emergent would take necessary preventative actions and subsequently have its facility certified by U.S. drug regulators to commence volume production. However, we did call attention to an Associated Press report indicating that this particular facility had a track record for being cited for quality and employee training lapses.

This week in a sobering report, Politico reports that U.S. Food and Drug Administration (FDA) inspectors have now produced findings indicating that the specific Emergent facility is not large or sanitary enough to be able to be certified for volume production at this time. According to this published report, such findings “cast doubt on whether Emergent will be able to contribute to J&J’s vaccine goals in the months ahead.”

While FDA inspectors reportedly found unsanitary conditions and quality control problems, the sense was that such conditions could be resolved fairly quickly: “But the agency’s conclusions about the size and design of Emergent’ s manufacturing facilities will be harder to address, and could prevent the company from meeting its goal to deliver millions of doses of Covid-19 vaccines this year.”

Emergent had previously promised that between J&J and a since-canceled contract with AstraZeneca that it would produce one billion doses in 2021.

The report cites a statement from J&J indicating it will continue addressing the problems identified by the FDA inspection and will still seek emergency authorization for the Emergent facility. But at the same time, J&J announced the establishing a “global vaccine supply network” that will include a production facility in Leiden, Netherlands that is already producing COVID-19 substance as well as additional unnamed global facilities.

That above is obviously a fall back plan, yet the Biden Administration’s use of the Defense Production Act cleared the way for J&J to utilize available manufacturing facilities of Merck to produce its vaccine. However, Merck ‘s facilities are not anticipated to be ready for volume production until the second-half of this year.

These ongoing developments establish a challenge for J&J in being able to deliver on both its U.S. and other regional vaccine supply commitments.

We suspect that there will be more developments centering on the J&J vaccine supply network.

Earlier this month, the chief of the World Health Organization (WHO) criticized what it described as a “shocking imbalance” in the distribution of coronavirus vaccines between rich and poor countries. The agency acknowledged the target of having vaccination programs under way in every country this month would obviously be missed. The WHO chief noted was that on average in high-income countries, almost one in four people have received a vaccine shot. In low-income countries, it’s one in more than 500.

According to a report from Reuters, thus far more than 38 million doses have been delivered to around 100 countries under the Covax scheme. The plan was to have more than two billion doses of vaccine available in 190 countries in less than a year.

Across Europe, which represents generally wealthy nations, the European Commission is now threatening to invoke legal actions for what is now described as “AstraZeneca’s complete failure to meet its vaccine delivery and contractual supply agreements for April, May and June.” The pharmaceutical firm is committed to supplying 180 million doses, enough for 90 million people, to EU nations this quarter. AstraZeneca was accused of “stockpiling” millions of doses at a factory in Italy last month, but the company denied the reports claiming many had been reserved for the WHO’s COVAX program. Meanwhile the EU has to rely on Pfizer and Moderna to meet its supply contracts, but Moderna has recently warned of supply challenges.

As our ongoing Supply Chain Matters highlights have noted, the challenges of available global supply coupled with individual country specific measures to prioritize critical supplies makes such a goal ever more challenging from an overall supply chain management perspective.

One of the unfortunate results of such imbalance was brought forward this week with India’s health ministry reporting in excess of 312,000 new infections, the most recorded in any country on a single day. According to the New York Times, that number eclipsed the previous one-day high of 300,669 recorded coronavirus cases, set in the United States on January 8.  The Times noted: “Over the past two months, the outbreak in India has exploded, with reports of superspreader gatherings, oxygen shortages and ambulances lined up outside hospitals because there were no ventilators for new patients.” Further reported was: “a sobering reminder that the pandemic is far from over, even as infections decline and vaccinations speed ahead in the United States and other wealthy parts of the world. India has surpassed 15.6 million total infections, second most after the United States.”

From a vaccine supply network lens is that two companies are producing COVID-19 vaccines in India. Serum Institute of India, based in Pune, is collaborating with AstraZeneca to produce Covishield, while Bharat Biotech, based in Hyderabad, has been licensed to produce the country’s own developed Covaxin vaccine. Yet, according to data from John Hopkins, an estimated one percent of India’s population has been vaccinated thus far. The same supply constraints facing other vaccine makers apply to India based producers, especially when wealthy nations impose domestic restrictions and allocations of needed raw materials. In early March, the CEO of the Serum Institute indicated to a World Health panel that the U.S. ban of exporting key vaccine related materials such as vials, filters and specialty glass would likely cause serious supply bottlenecks for the producer.

In January we cited a Bloomberg’s Supply Lines column that noted; “even under ideal conditions, getting jabs into the arms of 7.8 billion people would test the delicate choreography of world’s supply chains in ways unseen in peacetime.”

That is turning out to be the case and those residing in the U.S. should be very, very thankful for the supply management measures that were taken to facilitate the ability to administer over 200 million shots and totally vaccinate upwards of 88 million people thus far.

The Wall Street Journal reports that Pfizer has identified the first confirmed instances of fake supplies of the company’s branded vaccine. Vials seized in Mexico reportedly had fraudulent labeling while some inventory supply in Poland was actually an anti-wrinkle treatment.

In early February, upwards of 80 people at a clinic in Mexico had received the fraudulent vaccine for a reported $1000 per dose, but reportedly do not appeared to be harmed. Local authorities indicated the liquid in the vials was distilled water. The fraud was discovered by differing lot number labeling of supplies provided in Mexico along with the wrong expiration date. Six people were detained as a result of this incident.

In January, Polish authorities managed to seize the vaccine supply in an apartment before it was administered. According to local prosecutors, no person was believed to have received the tainted vaccine, and one individual was arrested.

Reportedly authorities in China and South Africa seized thousands of doses of counterfeit COVID-19 vaccine in warehouses and production plants according to Interpol.

With such a significant gap of overall global demand vs. available supply, conditions are such that criminals will resort to counterfeiting and opportunism.