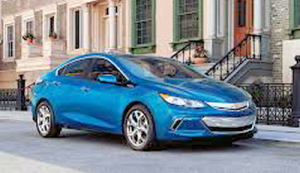 According to reporting from both Bloomberg and The Wall Street Journal both companies are laying the groundwork to jointly develop gasoline engines and crossover SUV’s , helping to offset added costs for electric vehicle development.

The two auto makers have signed a non-binding memorandum of understanding to form this alliance but details and what aspects of specific vehicles are yet to be determined. Reportedly both automakers will sell vehicles with respective brand names and cooperate in parts design, procurement and connected car services. Honda had indicated last spring that it would develop two electric vehicles leveraging GM’s technologies. The Journal report indicates that the partnership could eventually lead to specific Honda models being built in GM factories which could help in absorbing excess U.S. capacity.

According to Bloomberg, both auto makers plan to jointly develop and least four crossover SUV’s for the North America auto market, freeing up cash for electric powered vehicle development. Honda has previously collaborated with GM for the past several years on the development of hydrogen-powered fuel cell technologies.

Reportedly, if the collaboration works out as designed, this tie-up could lead to a closer bond in engineering integration that could lead to both companies taking a minority stake in each other. A Honda executive vice president indicated to the WSJ that his company hoped to achieve substantial cost savings in North America as a result of this partnership. Industry watchers further indicate that sharing engineering costs on traditional models are likely to continue as global sales dip as a result of global economic conditions brought on by the coronavirus pandemic.

Such partnerships are becoming more common as auto makers are more concerned with added capital and engineering costs associated with the next generation of vehicles. Examples have been Ford Motor and Volkswagen collaborating on development of electric vehicles and self-driving cars, and Nissan teaming up Renault and Mitsubishi Motors.

Taking full advantage of the innovation news cycle, GM further announced today a strategic partnership with electric truck producer Nikola Corp. calling for a $2 billion equity stake in this startup. According to a published report by Bloomberg, rather than cash, GM is paying in services, including being the exclusive supplier of fuel cells for Nikola’s Class 7/8 heavy duty trucks outside of Europe, along with GM assuming engineering and manufacturing services for Nikola’s Badger electric pickup truck.

News of this tie-up reportedly boosted Nikola shares by more than 30 percent on the news that this electric truck maker could save upwards of $5 billion in manufacturing and engineering costs.

According to the report, the Nikola-GM partnership poses strong and ell financed competition for Tesla’s Cybertruck but given GM has plans of its own to introduce a new branded electric powered Hummer vehicle, the threat already existed. News of today’s tie-up caused Tesla’s stock to plunge as much as 18 percent.

As noted in our research arm’s 2020 Predictions for Industry and Global Supply Chains published in January, various global auto and truck manufacturers will continue to seek out and develop strategic alliances to lesson the financial burdens of significant new investments in electrically powered and autonomous driving vehicles. Thus far, such announcements continue, and the partners are somewhat eye opening but yet pragmatic.

While investors seem occupied with the shiny start-ups and their cool technologies, the industry stalwarts such as Toyota, GM and Volkswagen are leading with their broad design engineering, manufacturing and component procurement capabilities.