In early 2016, General Electric made what was described at the time as a stunning announcement, selling its iconic branded Appliance business to China’s appliance giant Haier for a reported $5.4 billion.  GE had previously attempted to sell its appliance unit to Europe based Electrolux for $3.3 billion but that effort did not meet the approval of government regulators.

In our Supply Chain Matters commentary reflecting on the 2016 sale, we observed that Haier was willing to pay far more for access to such a brand as well as deeper U.S. manufacturing and supply chain presence. The China based firm had unsuccessfully courted U.S. appliance maker Maytag, ultimately losing to Whirlpool. We opined at the time that the Haier acquisition impact raised concerns on GE Appliance’s current manufacturing workforce and supplier base, each of whom have been buffeted by constant news related to being sold to other global manufacturers, perhaps adding more months of uncertainty.

Haier has taken on a positive perspective on the appliance unit by maintaining its branding, now termed GE Appliances, a Haier company, complete with the iconic GE logo. Corporate headquarters remains in Louisville Kentucky as is an independent U.S. management team. Similarly, GE Appliance U.S. workers appear to have a positive viewpoint on the support from their new corporate parent because of its core focus on the global appliance industry and overall goal to be a leader in this market segment

In 2018, GE Appliances announced its intent to become the leading appliance manufacturer in the U.S., and since then has announced a series of investments totaling more than $475 million in product, manufacturing and distribution capabilities.

The termed “smart warehouse” is the newest addition to the company’s $150 million national investment to expand its distribution network. According to GEA Vice President of Distribution, Mark Shirkness, part of GE Appliances’ distribution and supply chain commitment is in embracing Omni-channel fulfillment and maintain leadership in this capability. The new Columbus Center is noted as the first to blend digital intelligence and predictive analytics  with agility, providing GEA’s collective distribution network the ability to provide a Digital Thread to all finished goods material movement all the way to the customer. 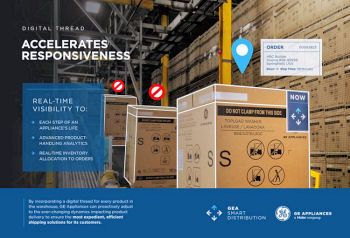 What Supply Chain Matters took special note of was that Shirkness stressed that this new facility was designed with an full “outside-in” focus as opposed to that of “inside-out.”  That includes an orientation on network flow and customer destination at all times. Every time inventory is touched or moved, it is in the context o where does it belong and is there an identified customer seeking this product.

There are three legs to this overall strategy:

Among the touted features of this new Columbus facility are:

GEA boasts that it makes more large, bulk appliance deliveries than any other company in the United States, delivering an appliance every four seconds.  The company has previously expanded warehouses in Dallas in June 2018 and in Denver in February 2019.

The new Commerce Georgia smart warehouse is its largest single distribution investment to date and reportedly represents the future of all warehouses in the company’s distribution network.

Regarding our prior 2016 perspective, a lot has indeed changed regarding GEA and the approach thus appears smart in many different dimensions not the least of which is embracing how consumers and contractors expectations for products, experience and the embracing of Haier’s vision of zero virtual distance to customers.