For Boeing, The Voice of Customers May Be at Odds with the Looking Class on Manufacturing and Supply Chain

As the Boeing 737 MAX grounding crisis continues into the possibility of a Q4 or even 2020 return to service, there are increasing signs of strain appearing across Boeing’s existing production facilities and supplier ecosystems. Grounded MAX aircraft continue to mount, cash burn is accelerating, and quality and design engineering flaws continue to gain more visibility. 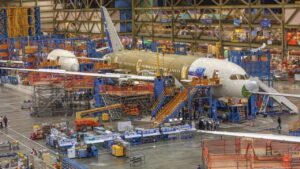 With production levels of Boeing 737 single aisle aircraft at reduced levels, and with the threat of a potential temporary suspension of monthly production, investor attention has turned to the 787 Dreamliner to potentially make-up for cash flow burn rate.

The Times report cited reviews of “hundreds of pages of internal emails, corporate documents and federal records,” along with interviews of upwards of a dozen current and former Boeing employees. The report pointed to a culture that often-valued production speed over quality. The report further indicated that some employees have filed whistleblower complaints with air safety regulators out of concern for aircraft safety, which are currently being investigated.

In a published Editorial in May of this year, the Charleston Post and Courier referenced the New York Times report, along with the FAA memo, and pointed to an ongoing internal struggle involving an organized labor union organizing campaign. Flight line workers had voted 104-65 to join an Aerospace workers labor union after two earlier votes failed, but Boeing has filed an ongoing appeal with the National Labor Relations Board (NLRB). Unlike the Everett Washington production complex, the North Charleston facility is not organized by labor unions.

One of the latest updates to this development has been an August report from the same Charleston Post and Courier: Airline surveys point to ongoing production problems at Boeing’s SC plant. (Metered complimentary view) This report points to recent customer survey and specific customer complaints involving the initial delivery of their new Dreamliner aircraft. That report notes: “While workers at the Dreamliner factory have previously reported quality lapses, this is the first time such private criticism (airline customers themselves) from Boeing’s customers has been made public.”

The report indicates that while Boeing received an overall average score of 3.5 out of 5, customer survey comments somewhat reinforced manufacturing problems reported in recent months. KLM Airlines reportedly described the factory’s quality control “way below acceptable standards. A further statement was: ”There are serious doubts about quality and Boeing’s ability to deliver on time.” Etihad Airways pointed to three aircraft deliveries being delayed because the aircraft required additional work after they exited the assembly building, with subsequent poor communication response from Boeing’s production staff. American Airlines reportedly raised concerns regarding Boeing mechanics being allowed to inspect the majority of their work themselves, eliminating a second quality check. Boeing does require second-party inspection on processes deemed critical for flight safety, thus many of these quality control shortfalls appear to involve other processes such as ladders or debris left in a tail section or certain assemblies not having totally completed work.

To be balanced the Courier report indicated a trio of carriers that gave the plant above-average marks including a perfect score submitted by United Airlines. Yet, despite that rating, United found 20 production issues when it inspected a newly delivered 787-10 in April.

In an update report four days later, the Courier indicated that workers told the publication that: ”the site’s production line is riddled with mistakes, and those problems multiplied when Boeing increased Dreamliner production from 12 to 14 aircraft per month, split between North Charleston and Everett (Washington)”

In July, Boeing completed a grand total of 19 aircraft, and fell two aircraft short of the stated goal of producing 14 Dreamliners for the month. The reported inference was continued challenges with quality and assembly processes. That report also cited a statement made by Boeing CEO Dennis Muilenburg at a Jeffries Global Industrials Conference: “I think it is important to note that productivity and profitability, they go hand in hand with safety and quality.”

Boeing stock is closely followed by a variety of Wall Street Analysts because of its previous ongoing growth trajectory and generous investor cash returns of dividends and stock buybacks. The company’s rather unique program-based accounting allows for production costs to be amortized over multiple years, and to an extent, transfer risks to the supply chain.

Similarly, extensive industry and general media news coverage of what may have been the cause of the two fatal 737 MAX accidents point to what many conclude as flaws in software design principles and assumptions as to expected pilot response times at times of flight system control failure.

With each passing month of the ongoing 737 MAX grounding, the risks increase, and so are the pressures for even faster output and productivity across the end-to-end supply chain. Thus, corporate and investor attention is now laser focused on Boeing’s own internal aircraft design processes, production and supplier network ecosystems to ascertain added risks or vulnerabilities. Another common theme readers may have noticed is internal checks and balances and oversight.

With little surprise, the looking glass has turned toward the need for higher monthly production levels for the Dreamliner program as a means to generate higher profitability needs.

The upcoming quarter will likely reflect even more visibility across production and supply networks, labor unrest and/or supplier vulnerabilities.

Whereas the looking glass for competitor Airbus is insuring that established goals and strategies related to significant aircraft production ramp-up are consummated, Boeing has to first pay very close attention to the voice of its airline customers.

Reports of 737 MAX customers calling for a cautious and comprehensive review of all new flight control changes, and of 787 Dreamliner customers voicing concerns that quality shortcomings are apparent, are each concerning.

The truism remains that the supply chain’s primary goal is to first and foremost, meet or exceed the needs of all customers.

Productivity and profitability can go hand in hand with quality and safety, except when the voice of customers, pilots and of flyers tells you otherwise.