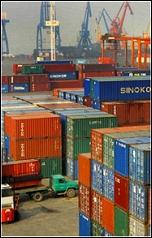 Supply Chain Matters has featured various rants regarding global transportation industry structural shifts, rate trends, and what we viewed as a failure of the industry to deal with blatant realities of quickly changing global sourcing and trade patterns and too much capacity chasing lower transport volumes. Case in point, Logistics Management recently headlined an article, U.S. supply chains challenged by slowdown in maritime activity. The article called attention to a report from Zopol Corporation, a trade intelligence firm that concludes that U.S. import volumes in the first six months of this year, compared to the first-half of 2012, are virtually stagnant.  Of the top inbound ports, Los Angeles is down over 9 percent in container volume compared to the first-half of 2012, while the ports of New York and Newark are down 5 percent.

But the most significant evidence point comes from an interview with the CEO of Maersk Line, global leader of ocean container transport, which was featured in two separate articles, at this web link and at this web link, published in today’s edition of The Financial Times. (paid subscription required or free metered view).

Soren Skou assumed the CEO role at Maersk in January and indicated in the FT interview that the line was losing between $8M-$9M daily at that time.  The shipping line has since embarked on a wide-scale effort to cut costs.  He indicated that the industry needs to adjust expectations to a lower growth.  Maersk has adjusted its annual growth rate to 4 to 5 percent compared to the pre-2008 levels of 10 percent.  Skou acknowledged that the extent on industry rate volatility was clear in the recent quarter, when rates on the Asia To Europe segment, the busiest route, plunged from break-even levels of $1200 per TEU to $400.  He acknowledged that this was the fastest rate decline that the carrier has ever experienced. While the industry anticipated 4 to 5 percent volume growth, demand turned a negative 2 percent. Rate negotiation clearly shifted in the shipper’s favor, but that has implications.

The most candid portion of the interview, by our view, was Mr. Skou’s descriptor that the two trends that have fueled growth since the 1990’s are running their course: U.S. and European offshoring of production within Asia is all but over and that new opportunities to move goods via ocean container have come to an end.  A direct quote from the article: “Most of the stuff that can go in containers is going in containers today.”

Regarding the Maersk decision in 2011, at the height of the financial crisis, to order 20 new E-class mega-ships, the article intimates that the decision was seen as a means to outmaneuver the competition who were struggling financially, and was mainly to seize market share.  Mr. Skou indicates in the interview that this strategy has changed, and that the line will henceforth grow with the market, with delivery of these newer, as much as 30 percent more efficient ships utilized to retire older vessels from regular service. Maersk’s newest Triple-E class vessel, the Mærsk McKinney-Møller, had its maiden voyage this week sailing from South Korea to Europe.  Skou acknowledged that the announcement of the new P3 Network involving the top three carriers sailing the largest trade routes was in-part driven by the ongoing arrivals of the new Triple-E class vessels. Supply Chain Matters viewed this as a major announcement with far reaching implications.

Our takeaway remains that there are structural changes underway involving global transportation and manufacturers and retailers need to keep a keen eye out for the implications to their ongoing sourcing and supply chain strategies . The effects of changing global sourcing strategies, shipper pressures for reduced transportation costs and more reliable service are all interrelating in these changes.

The second-half of 2013 should provide further developments in this ongoing transition.

What about your views?  Transportation and logistics professionals are welcomed to share their perspective and viewpoints regarding these ongoing shifts.