In the light of very tight capacity and consequent exploding trucking transportation costs across the United States, February economic data and new trade developments brings good news, not so good news perspectives to the current challenge.

In mid-February, Supply Chain Matters called reader attention to the very robust production and supply chain activity occurring globally and, in the North America. Business media brought additional light to the fact that U.S. based CEO’s were rather concerned about rising internal costs reflected up and down supply chains. In the U.S., the compounding effects of a summer of catastrophic natural disasters, a very robust Q4 holiday fulfillment period in both online and physical in-store retail, compounded by a new federal mandate for electronic logging of driving time, has led to a nationwide shortage of surface trucking capacity. That has led to a consequent explosive rise in surface transportation costs, with some large companies already reporting hundreds of millions in added transportation costs. Our U.S. based readers working in areas of transportation and logistics can surely attest to the current challenges in operational and added cost dimensions. 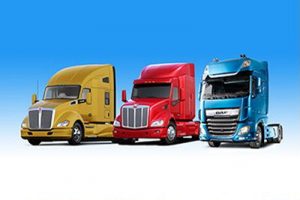 According to data by The Wall Street Journal and cited from freight analysts firm FTR, North American fleet owners ordered over 40,000 Class 8 trucks in February. That figure represented a reported 76 percent increase compared to the same month in 2017.  January’s heavy-truck truck orders were noted as achieving a 12-year high. An FTR executive indicated to the WSJ that orders were spread across fleets of multiple sizes reflecting that many carriers are now investing in an expected 4 percent increase in overall shipping demand in 2018.

The reality was that many trucking carriers held-back on new truck purchases for most of last year hoping that their efforts to delay the enforcement of electronic mileage logging would be successful. Similar to most transportation, a managed capacity environment results in a carrier advantage in rate-setting. However, the current unprecedented levels of surface transportation activity demand have far exceeded available capacity and are now impacting carrier performance expectations.

The U.S. Department of Labor indicated earlier this month that trucking companies added 5600 additional truck driving jobs in February, again an indicator that carriers are moving as quickly as possible to meet expected increases in demand. That number was further characterized as largest such increase since May 2015. In order to achieve such numbers, trucking firms have had little choice but to improve pay and benefits. In the current boom period, carriers now have more flexibility to pass-along such added costs.

All of the above February data would point to some optimism regarding added trucking capacity coming online in the coming months. Except for one other significant external event.

That, of course, is President’s Trump’s imposition of steep tariffs on imported steel and aluminum.

The initial indicators was that these tariffs would be imposed on all imported steel and aluminum with no exceptions. That situation was a likely immediate red flag relative to all of the current outstanding new heavy-duty truck orders.

The tariffs have subsequently been modified to exempt Canada and Mexico, both countries being NAFTA trade partners with the United States and both being integral with North American auto and truck production supply chain flows.  Other countries such as the Eurozone, Japan and South Korea supposedly can appeal for an exemption from such tariffs, but the process remains undefined and unclear at this point. There is also the open questions as to whether other countries will respond with similar tariff actions relative to U.S. produced products.

We highlight this new tariff because the design and manufacturing of Class 8 heavy-duty trucks has comparable global product design and supply chain dependencies as global branded autos. Similar to other global supply chain strategies, truck brands share global platforms and major components of their corporate parents such as transmissions, steering systems, and the like.

The top five Class 8 truck manufacturer brands, and their corporate parent as of December were:

There is no question that metal pricing has a significant influence on the manufacturing costs of heavy-duty trucks, not to mention the dependency on metal forming and forging suppliers scattered across the globe.

The good and not so good takeaway message for multi-industry transportation and logistics professionals is that the U.S. trucking industry, and likely other global trucking carriers, are responding to needs for increased capacity in both new truck orders and added hiring of drivers. This is indeed long overdue.

The new uncertainty added is the latest trade volley enacted by the U.S. on imported steel and aluminum, and that subsequent impact on trucking industry supply chain costs.

Large, heavy-duty trucks were already a rather expensive acquisition for trucking carriers and fleets. The announcement of new Class 8, alternative powered trucks adds a far new dimension in the overall decision for strategic fleet building.

The open question is timing, timing to satisfy current gaps in needed capacity, and in future needs to convert fleets to alternative powered vehicles and at some point, in future, autonomous driving capabilities.

It is a delicate balance and trucking CEO’s and multi-industry supply chains are indeed in the middle of this vortex of current multi-industry forces.

As the saying goes, that is why industry executives get paid the big bucks to navigate turbulent markets and uncertain times.

Yet Another Concerning Commentary of Supply Chain Bullying