February’s index value was reported as 53.9, 0.3 percentage points higher than that of January.  As noted in the graph below, global output levels are not approaching that experienced in late 2018, despite the ongoing COVID-19 pandemic.

Of the 29 nations that make up this global activity index, 23 were noted as having a reading above the 50 mark which is an indicator of activity growth. The fastest growing nations were noted as Germany, the Netherlands, the United States, Brazil and Austria.  Sector data was noted indicating growth of new orders among the three sectors of intermediate, consumer and investment goods industries. Order backlogs reportedly increased for the seventh successive month while average lead times reportedly lengthened to the second greatest extent. 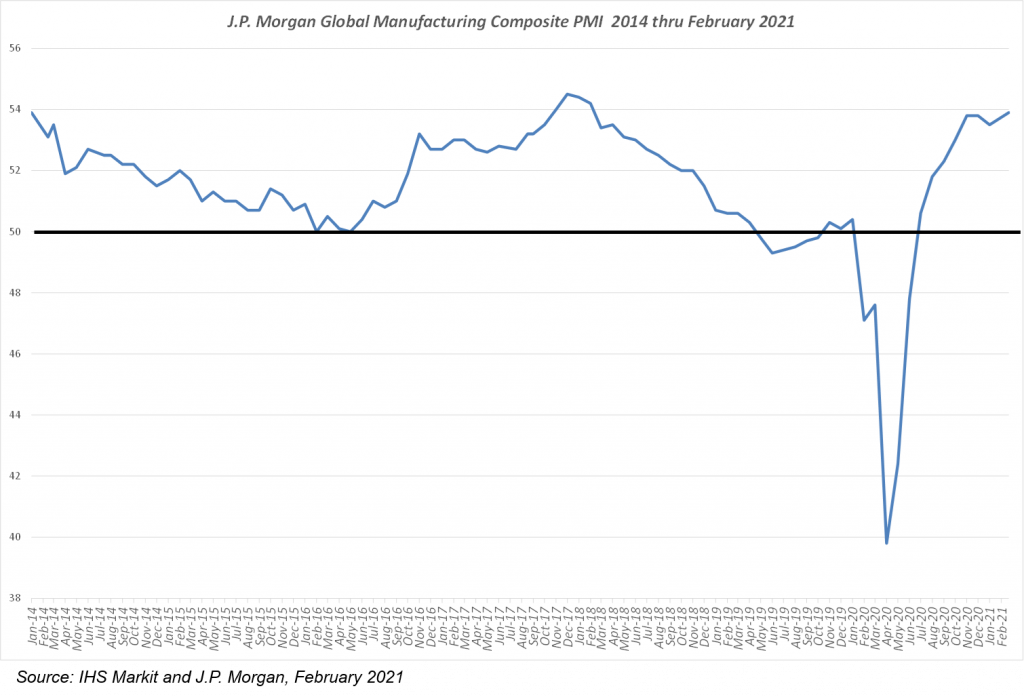 The IHS Markit Eurozone Manufacturing PMI® posted a value of 57.9 for February, a 0.2 percentage rise from that of January. The report noted that the Eurozone’s manufacturing economy improved to the greatest degree in over three years. All three goods sectors, intermediate, consumer and investment goods reportedly improved in February. Panels reported a continued lengthening of delivery times with the latest figures: “. showed the second-greatest deterioration in lead times since data was first available nearly 24 years ago.”

The closely aligned IHS Markit / CIPS UK Manufacturing PMI® reported another upturn in United Kingdom manufacturing with the February index rising one full percentage point to 55.1 for February. Report authors cautioned that output rose at the weakest pace during the ongoing nine-month of increases, along with COVID-19, Brexit transition and complications from shipping difficulties weighing on momentum. None the less, report authors point to business optimism remaining high for the year 2021. Bloomberg recently reported that freight carriers are continuing to reject cargoes that are destined to cross U.K. borders because of ongoing Customs paperwork friction.

The Taiwanese manufacturing sector continues to demonstrate robust, sustained growth in activity levels, with momentum remaining near decade highs.  The IHS Markit Taiwan Manufacturing PMI® was reported as 60.4 in February, up 0.2 percentage points from January’s reported levels.  The rate of improvement in February was noted as the sharpest recorded since April 2010. To provide readers a visual sense, below we have reproduced the reported Taiwan PMI levels from January 2019 to date. Notice the explosive growth after the first quarter of 2020. Some may attribute this to the demand for semiconductor, electronic components and manufacturing services and we would be curious to more detailed data.

Panel members for the February report reportedly indicated robust product demand for both domestic and export needs with the latter reflecting added demand from China, Europe and the United States. With this region being a hub for high tech and semiconductor component supply needs, the continued momentum is believed to continue into the months ahead. The February report’s commentary, however, cautions that: “Supply chain delays remained severe due to limited stock at suppliers and container shortages.” 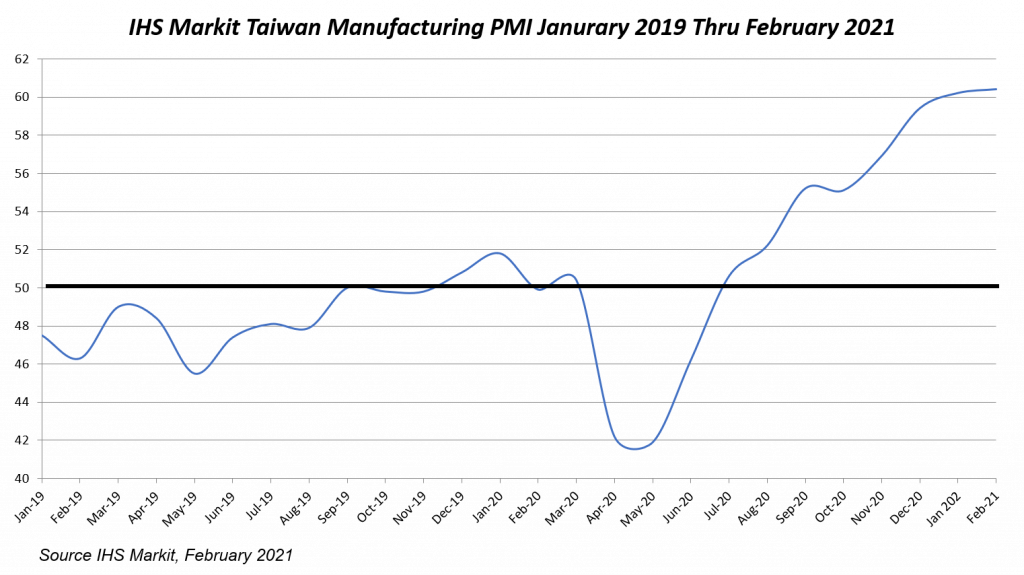 The separate IHS Markit U.S. Manufacturing PMI® posted a value of 58.6 for February, a 0.6 percentage point decrease from that of January. This report’s headline noted production growth nearing a six-month high but the prices gauge being the highest since 2011.

Separately, Bloomberg reported this week that the surge in U.S. imports shows little signs of slowing down, but at the same time congestion among U.S. ports and the COVID-19 pandemic remain as causing imbalances in global recovery. Entering this week, a reported 33 container vessels were anchored off the ports of Los Angeles and Long Beach awaiting availability of unloading facilities. The average wait times were noted as 7.7 days, down from 8 days in February.

A new bright spot for the Developed Region category is that of South Korea. The IHS Markit South Korea Manufacturing PMI® reported the highest PMI level since April of 2010, reported as 55.3 in February. Manufacturers in the country reportedly attributed the ongoing expansion to a sustained rise in product demand. Reporting on the index’s February report, Bloomberg noted that the country’s exports in semiconductor components, notably memory ships, as well as autos, expanded for the fourth straight month. Industrial output grew 7.5 percent in January.

The very closely watched PMI indices for China once again reflected a lower rate of expansion by the end of February. The Caixin China General Manufacturing PMI®, which is generally weighted toward smaller private manufacturers, fell to a value of 50.9 in February from the value of 51.5 recorded for January. The index has declined 2.1 percentage points since the end of 2020. The latest report noted softer improvement in the health of China’s manufacturing sector with slower rises in new orders and production. This year, the Lunar New Year celebration came in February, which weighted on production since factories shutdown during this national holiday.  The Caixin report pointed also to travel restrictions and inventory shortages as weighting down growth. The authors noted that manufacturers in the region remain confident that production output will increase over the next twelve months.

China’s PMI index produced by the nation’s Bureau of Statistics dropped to a value of 50.6 from the 51.3 reported for January. This index is weighted more towards larger, state-owned manufacturers. A consensus of economists was anticipating a value of 51, hence there was some disappointment. The authors pointed to production being slowed by the Lunar New Year Spring Festival but did indicate that New Orders had slipped from 51.5 in the latest month from the 52.3 value reported for January.  Most economists seem to view the current PMI weakness in China as likely temporary.

A bright spot in this grouping remains that of India but the IHS Markit India Manufacturing PMI® slipped to 57.5 for February from the 57.7 recorded for January. However, the latest report remained upbeat and was headlined as New orders and production output rising sharply. As noted in the January report, elongated supplier delivery times were further noted in the February report, but that stated, data reportedly suggested that input inventories reflect the strongest increase in this survey’s history. Heightened capacity constraints remain as is higher input prices.

A further right spot is Vietnam with the IHS Markit Vietnam Manufacturing Index® rising to 51.6 in February from a level of 51.3 reported for January. Noted was sustained growth of New Orders related to export demand which helped to boost activity. However, the report indicates challenges in securing raw materials and lengthening lead times among suppliers.

A sign of optimism for the Developed region segment stems from Mexico. The IHS Markit Mexico Manufacturing PMI® posted a value of 44.2 for February, a 1.2 percentage point increase from the 43.0 value reported for January. However, the latest report indicates that both output and New Orders continue to contract because of the ongoing COVID-19 outbreak across this country. That stated, the report authors indicate that sentiment toward growth prospects have improved because of vaccine rollout. The overall pace of contraction was noted as slowest in 11 months but sharper than any recorded prior to the coronavirus outbreak. The report’s commentary header noted that firms are sensing some light at the end of the tunnel.

In early January when Supply Chain Matters highlighted the December and full 2020 PMI data, we stated our perspective that indeed some concern and caution is appropriate for the first quarter of 2021. The data thru December 2020 had indicated that while inbound order activities remained positive, supplier lead time, manufacturing challenges and other pandemic related disruptions were taking a noticeable toll on service levels and added costs. January’s global-wide PMI data reflected similar concerns and trending. There remains a global wide imbalance of ocean shipping containers that are impacting goods shipments from Asia supply sources.

These are all warning signs for global supply chain management teams regarding planning and cost control over the coming weeks and months.