The Supply Chain Matters blog highlights an example of how misguided trade and tariff policy can impact both a business goal for product availability and a global supply chain capability of a U.S. and global based auto producer.
Introduction and Prelude
Supply Chain Matters will not be providing a full weekly trade and tariff update today because Canadian and U.S. trade officials are still engaged in intense talks toward augmenting the previously announced U.S.-Mexico bi-lateral trade agreement to that of a tri-lateral NAFTA renewal agreement.
As with pen this commentary, reports from both Bloomberg and Reuters indicate that President Donald Trump told reporters on Air Force One today that “if he wants,” he was “ready to go” on tariffs for an incremental $267 billion in Chinese goods. These would come on top of the $200 billion in goods already targeted. These reports immediately prompted a 100-point drop of the Dow Jones Industrial Average.
Bloomberg and business network CNBC further reported that the upcoming proposed round of $200 billion apparently includes certain Apple products that reportedly involve the Apple Watch, AirPods, and Apple Pencil. Spared is the $200 billion round is the coveted Apple iPhone, but it remains unclear what will be included in the President’s new indication of a $267 billion round, despite Apple CEO Tim Cook’s assurances to the contrary. This headline news involving a threat to Apple caused the company’s stock to dip one percent before today’s close. Consequently, shares of suppliers Qualcomm, Sky Works and Cirrus Logic shares also dipped on this report.
Since trade and tariff news remains politically volatile, we will devote this blog commentary to an example of the blowback damage that can impact global supply chain strategy for specific companies.

Last week, The Wall Street Journal reported that General Motors, which had plans to ramp-up electric vehicle production within China, incurred a major setback after the auto-maker concluded that designated Chinese sourced lithium-ion batteries intended for use failed to meet GM’s performance and safety standards for operational use. China represents by many accounts, one of the largest markets for electrically-powered vehicles because the government has mandated threshold sales levels for such vehicles.
The report indicates that GM, which was set to enter volume production of the plug-in hybrid Buick Velite 6, a variant of the Chevrolet Bolt, has now been forced to postpone those plans.  GM reportedly originally planned to utilize Korea based battery supplier LG Chem but had to alter that plan in 2016 when the Chinese government mandated use of only approved domestic battery suppliers for electric vehicle use in that country. The WSJ was quick to note that such mandates fuel the complaints leading to current U.S. trade actions against China, namely that China’s intentions are to dominate future strategic technologies by any means. 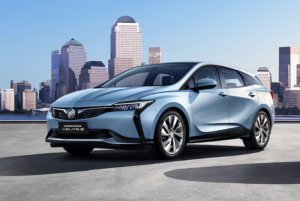 The battery itself comes from supplier A123 Systems, headquartered in Livonia Michigan, but with volume production facilities located in China. This battery supplier was rescued from bankruptcy by Chinese auto parts supplier Wanxian Group in 2013, and battery production comes from a facility near the city of Hangzhou.
In a Supply Chain Matters commentary published in 2009 reflecting on the literal future of the U.S. automotive industry , we observed, in-part at the time:
“Another realization that has finally sunk in among senior industry leaders is that the future of this industry (automotive) no longer lies with selling more and more gasoline-guzzling vehicles, but rather in alternative energy, hybrid, or electric powered vehicles. As the industry attempts to make this next critical transformation, one key tenet of the supply chain will become the most crucial.”
That commentary went on to cite experts indicating that suppliers who control battery technology, cost and performance will define the modern era of the automotive industry, and according to one noted expert, may not necessarily be something to outsource from the resident country. In 2009 and beyond, global automotive manufacturers placed bets on a number of domestic and global based battery suppliers in attempts to secure the most promising technology, cost, and performance factors. Those bets involved U.S., China, and other global based suppliers, including Korea and Japan.
The termed U.S. government stimulus subsidies at the time, designated to jump start economic and domestic industry growth, included direct investment in key technologies. Battery supplier A123 Systems was able to tap upwards of $200 million in government subsidy funding to establish a U.S. based strategic development and manufacturing capability. Several years later, A123 ran into the reality that production and supply network efficiencies needed by automotive manufacturers could only be afforded by sourcing volume production in China. A series of subsequent missteps led to bankruptcy status, and the presence of a Chinese acquiror.
Viewpoint
The essence of global supply chain component sourcing is to seek out the best product and process capabilities at the most affordable cost. Trade protectionist policies limit such options for domestic manufacturers and suppliers along with foreign based manufacturers seeking growth in export markets.
Readers can debate whether U.S. based auto manufacturers failed to nurture a world-class battery supply chain network ecosystem, or whether intellectual property was acquired via deep pocket acquisition from global players with strategic intent. Readers can further ponder whether U.S. manufacturers fell back to a strategy for favoring sales of large gasoline consuming pick-up trucks and SUV’s to achieve larger margins and profits at the cost of required innovation in electric and hybrid vehicle time-to-market needs.
The reality remains that product and process innovation stems from mutual trade policies that uphold intellectual property rights and that supply networks be recognized for the capabilities they provide, regardless of global region.