Since the inception of Supply Chain Matters, we have amplified numerous occurrences of significant industry supply chain disruption brought on by natural disaster. Just about two weeks ago, we noted the approach of Hurricane Harvey, which has turned out to be a 500-year milestone storm delivering massive flooding to the Texas and Louisiana coastline regions. The transportation, logistics and industry impacts in the aftermath of Harvey are still unfolding.

As we pen this commentary on Thursday evening, September 7, another significant and record-breaking cyclone has the potential to add further disruption to industry supply chain and transportation networks.

Hurricane Irma, a Category 5 storm packing sustained winds more than 180 miles per hour is churning across the Atlantic Caribbean islands and increasingly, it appears that the Florida coastline is threatened for a direct impact. The National Hurricane Center currently characterizes the storm as: “extremely dangerous.” 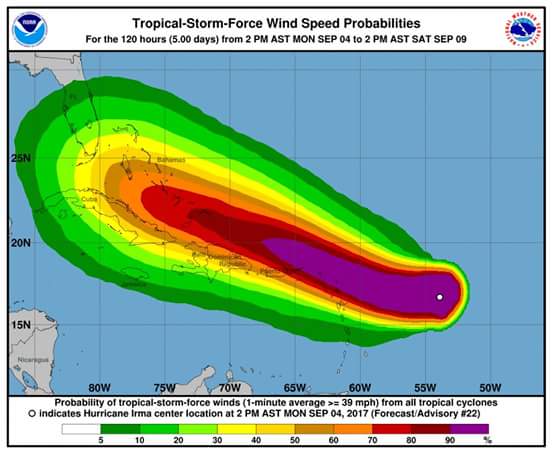 A State of Emergency has been declared for the entire state of Florida and mandatory evacuations of residents are in-effect for the Florida Keys and Miami Beach regions. The sheer size of Irma is such that it exceeds the width of all of Florida. Thus, authorities have been very stern in their warning messages that residents be prepared for the worst. Irma is forecasted to impact Florida sometime late Saturday or early Sunday  and possibly make its way up the Southeastern region of the U.S. All is dependent on where thi storm makes its turn toward the northeast.

Right behind Irma is Hurricane Jose, also strengthening in size, which could pose an additional threat to island and mai 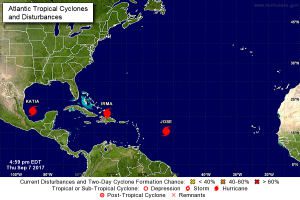 nland areas, depending on its eventual track. Hurricane Katia is further churning in the Gulf of Mexico and threatening to impact Mexico coastal areas.

Noted in our last update on the effects of Hurricane Harvey, transportation to the impacted Texas coast regions is just starting to recover, with lots of trucking capacity being marshalled for additional storm related aid.  With the pending strike and sheer size of Irma, Federal disaster agencies have already scrambled hundreds of trucks to move emergency supplies of food, water, and fuel to the Florida region. Interstate 95 and the Florida Turnpike that spans the length of the state are packed with crawling traffic, mostly moving away from the southernmost portions.

Once again, many industry supply chain, procurement, and product management teams will continue with frequent communications with suppliers, contract manufacturers and transportation services providers within the impacted regions. Within the potential path of Irma could be the Ports of Miami and Fort Lauderdale, hubs for Latin American sourced goods as well as a healthy volume of cruise ship terminals. If Irma were to continue up the Eastern seaboard, disruption concerns would be raised for the Ports of Charleston and Savannah, major hubs supporting the U.S. Southeast manufacturing region.

Let us all hope for the best outcomes both for human life and in potential destruction.

Many business continuity and disaster support centers are already stepping into action mode, preparation for the worst and trusting in the best possible outcomes.

The Competitive Race Within Aerospace is Manufacturing and Supply Chain Execution