Less than five months after a Lion Air Boeing 737 MAX 8 crashed in Indonesia, killing 189 people, another tragic accident has occurred. An Ethiopian Airlines Boeing 737 MAX 8  aircraft headed to Nairobi, Kenya, after taking off from Addis Ababa went down shortly after takeoff with reportedly all 157 passengers killed. Supply Chain Matters provides some initial perspectives.

The aircraft took-off in good weather and with clear visibility, but encountered an emergency causing the pilot to declare an emergency and seek return to the airport. The aircraft lost contact with controllers six minutes after takeoff and apparently quickly plunged to the ground.

The aircraft was relatively new having been delivered in November.  Ethiopian Airlines indicated that the captain of the flight had more than 8,000 flying hours and a “commendable performance.”

Our thoughts and prayers extend to the families of all those impacted by this tragedy. Among citizens of a number of countries, the passengers reportedly included upwards of 30 delegates traveling to Nairobi for a weeklong United Nations Environment Assembly that was scheduled to start today.

The reaction and response to this tragedy have been swift. Direct parallels are being drawn to the same model aircraft and rather similar crash characteristics of the Indonesian incident. Many travelers are now queering friends, co-workers and news outlets as to whether this particular model of aircraft is safe.

The National Transportation Safety Board (NTSB) in the United States said it would send a four-person team to assist Ethiopian authorities investigating Sunday’s crash. Boeing is immediately dispatching its own technical investigation team to assist.

For Boeing, this is an unquestioned crisis.

News of this accident sent Boeing shares to plunge over twenty-percent, and then recover somewhat as we pen this commentary. If there is any good news, it is that the flight’s voice and data recorders were quickly recovered. The question is whether all of the data was preserved given the force of the impact.

Ethiopian Airlines immediately grounded all four of its other 737 MAX aircraft. The airline had ordered a total of 30 of this model aircraft, of which, five were delivered. Other airlines were quick to respond. China’s aviation regulator  immediately grounded nearly 100 of the aircraft operated by its airlines, more than a quarter of the global fleet, pending more definitive information, along with some other countries including India. This far, aviation safety and airline operators either in Europe or North America have elected not to ground this aircraft, at least not yet.

Boeing indicated today that it sees no reason to recommend that airlines ground the aircraft. That statement seems for this author to be déjà vu to past Boeing response.

The 737 MAX has been one of the more popular aircraft models for Boeing, and as Supply Chain Matters has indicated in previous commentary, the 737 aircraft family is the literal cash cow for Boeing.

Following the Lion Air crash, the aircraft manufacturer warned operators in a service bulletin of the potential of an instrument failure that could result in the aircraft entering a dangerous dive.  The problem was believed to be a failure of a sensor that indicates to the pilot and the aircraft’s flight computer the plane’s “angle of attack,” the angle between the wing of the plane and the flow of air moving through.

The sensor’s potential false reading can presumably cause the aircraft flight computer to initiate a nose dive adjustment to compensate. It further prompts a stall warning to pilots. When pilots initiate extra force to correct the nose down, the failure condition repeats or gets worse.  According to reports from local Indonesian safety authorities, the ill-fated Lion Air crew reportedly had to deal with more than two dozen repeated automated nose-down actions by manual maneuvers, until control was lost.

Boeing subsequently issued revised procedures for pilots to disengage the auto trim control system and take manual control.  The immediate reaction among 737 MAX pilots was surprise in that this was the first time that they were informed of the aircraft’s flight trim procedures. Such actions reportedly were omitted in the aircraft’s training documentation or any simulator training procedures. The notion that the override procedures require quick actions amid conflicting instrument readings over a very short period was a further concern.

No doubt, the spotlight on this aircraft’s automated systems will again be thrust into the public spotlight, along with the specific question as to whether this is a pure software, aircraft structural design, or combination problem. A further theme revolves around highly experienced 737 pilots vs. inexperienced pilots more dependent on automated systems for flight control.

Importance of Prior Crisis Learning

Boeing needs to take to heart the learning from the previous 2013-2014 lithium ion battery explosions and fires that clouded the initial 787 Dreamliner aircraft. Readers will recall that there were some questions as to what was causing such fires to occur, and the aircraft’s safety was thrust into the global spotlight. After Boeing initially declined to ground the aircraft, global regulators collectively mandated the aircraft’s grounding until Boeing came-up with a definitive root cause and proven solution. An NTSB investigative report eventually concluded that the probable cause was an internal short circuit within a battery cell which led to a condition of thermal runway. The report also pointed to cell manufacturing defects and oversight of cell manufacturing processes involving the battery manufacturer. In addition to battery manufacturing oversight, Boeing then added additional battery compartment design safeguards to help mitigate an incident of fire that would compromise the aircraft’s operation. Today, there are little incidents of battery issues for operational 787’s. However, Boeing did initially incur both a financial and reputational hit regarding its response and initial foot-dragging.

The 787 MAX incidents now appear to take on more concerning and troubling implications for aircraft safety. By our lens, Boeing needs to get in-front of this crisis through transparency and proactive actions. Boeing’s senior executive and/or product design executives need to be out-front and visible. Yes, there are quite a few customer orders pending and Boeing’s 737 supply network teams working full-tilt to scale-up monthly production volumes will also be potentially impacted. But, more is at-stake regarding this specific model’s safety reputation.

Whether that’s a global-wide grounding to ascertain specific root-cause or an all-out effort to allow time for all 737 MAX pilots to retrain on simulators, action needs to occur, either from Boeing, global regulators or both. Whatever is required, be it software, hardware or pilot related, the flying public needs to have definitive answers. 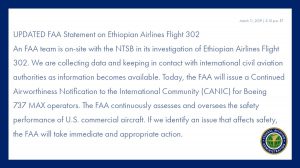 So much for one side of stakeholder influence.