The following Supply Chain Matters blog begins our series of deep dives into each of our previously unveiled ten 2017 Predictions for Industry and Global Supply Chains.

At the start of the New Year, our parent, the Ferrari Consulting and Research Group along with our Supply Chain Matters blog as a broadcast medium, provides a series of predictions for the coming year. These predictions are provided in the spirit of assisting industry specific and global supply chain cross-functional teams in helping to set management objectives for the year ahead. Our further goal is helping our readers and clients to prepare supply chain management and line-of-business teams in establishing impactful programs, initiatives, and educational agendas.

In this initial drill down posting, we dive deeper into our first prediction.

There is little doubt that the year 2017 will present even more uncertainty and increased volatility for many industry supply chains. Organizations will once again need to be prepared.

Entering the new year, the picture of various indices and benchmarks at the end of 2016, shown in the accompanying chart indicate some problematic areas that include double-digit growth in general commodity and fuel costs, and continued strength of the U.S. Dollar. 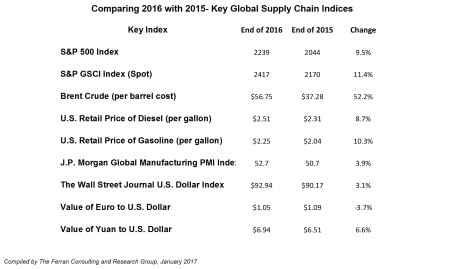 By the end of 2016, political winds of change were blowing a strong gust across the global economy. Economies are entering 2017 in a year of heightened uncertainty in markets, brought about by more volatile, populist focused political environments among major developed nations including Eurozone countries and the United States. At the same time, select global-wide PMI and supply chain indices were all reflecting various signs of positive growth. The open question is whether existing global chain activity gets side railed in the coming year due to geopolitical and other economic events.

The widely unexpected election of Donald Trump as the new President of the United States is indeed sending out shockwaves around the world. The Eurozone, which was already attempting to deal with the unexpected results of Britain’s referendum vote to exit the EU (Brexit) faces yet another concern with Italy’s December vote to reject constitutional reforms, which prompted the resignation of Prime Minister Matteo Renzi. This could lead to a potential general election in 2017 that could have strong populist overtones including potential EU exit.

By late-December, the value of Euro was moving ever closer to parity with the U.S. Dollar, its lowest level since January 2003. Many analysts are predicting that in 2017, the Euro will indeed reach parity and could even drop below the value of the dollar at some point. That will add to the challenges of U.S. based companies to export products and services globally.

Also in 2017, a presidential election will occur in France with parliamentary elections scheduled for Germany and the Netherlands. With Brexit and the election of Donald Trump, fringe political parties are gaining a renewed voice, and with that, a whole lot of uncertainty relates to change in existing immigration policies, protected borders and restricted free trade policies to protect domestic employment.

This will cause industry and global supply chains to be challenged with the need for higher levels of agility in 2017. Supply chain risk factors will significantly rise across many industries and within many global regions, along with needs for educating line of business and senior executives on the supply chain implications of such risks. More informed and deeper analytical capabilities to ascertain various impacts to global component and finished goods manufacturing and supply chain sourcing will likely be an ongoing requirement and supply chain organizations who have not invested in such analysis and decision-making capabilities will be tested.

In its World Economic Outlook published in October 2016, The International Monetary Fund (IMF) cited a subdued outlook in 2017, with political tensions and an elevated policy uncertainty prevalent in the global economy. A stated common theme was the weak and precarious nature of the global recovery and consequent threats it was facing. That was before the sudden unexpected election of Donald Trump.

The October WTO forecast called for an anticipated global growth rate of 3.4 percent in 2017. The October forecast last year had called for a 3.6 percent growth level in 2016, but that was subsequently revised downward during the year to a current 2016 projected growth of 3.1 percent. Because of the ongoing uncertainty, the WTO forecasters clearly indicate that again in 2017, the potential for output setbacks are high as underscored by repeated markdowns in recent years.

Prospects were noted as differing sharply across countries and regions, with Asia in general, and India showing robust growth prospects. The 2016 growth forecast among Emerging Market and Developing Economies was projected to grow 4.6 percent. 0.4 percentage points higher than projected 2016 levels. Growth for China is 2017 was reduced to 6.2 percent vs. a 6.6 percent expected growth rate in 2016.

Growth among Advanced Economies, which includes the Eurozone, Canada, Japan, United Kingdom and the United States is forecasted to grow 1.8 percent in 2017, 0.2 percentage points higher than projected 2016 levels. While the WTO projects output in the United States to grow at an annual rate of 1.6 percent in 2017, current forecasts from economists are more optimistic, indicating a 2.4 percent growth rate reflected in increased output due to corporate tax reductions and potential added infrastructure investments.

The J.P. Morgan Global Manufacturing PMI, a composite index and recognized benchmark of global supply chain and production activity registered a value of 52.6 by the end of 2016, reflecting a surprising 1.9 percentage point increase from where this index ended in 2015, at a value of 50.7. By the end of December, global PMI indices pointed to spurred Q4 growth among developed economies such as the United States, Eurozone countries, Japan, and Taiwan. However, supply chain activity indices were generally declining among developing and low cost manufacturing regions apart from Vietnam. Currency pressures and a rather strong U.S. dollar were again having a discernable impact on output levels.

With major future trade agreements such as the Trans Pacific Partnership garnering little domestic political support in the United States and now other nations,  other Asia-centric global trade initiatives will come to the forefront with China as a major influence.

As we have stated on prior annual predictions, industry and global supply chains should anticipate yet another challenging year with resiliency, adaptability, and risk mitigation as important competencies. For 2017, industry supply chains will again be called upon to help contribute to top-line revenue growth. We anticipate added pressures for cost controls and cost reductions, which will place additional pressures on capabilities. The ability to share important information and educate the business on supply chain impacts and/or risk tradeoffs will be an important differentiator.

In seeking other viewpoints regarding 2017, we had the opportunity to speak with Paul Keel, Senior Vice President of Supply Chain for 3M. His input was: “The leaders of tomorrow will be organizations that can effectively manage a bimodal supply chain.”

According to Keel, bimodal equates to continuous improvement initiatives equating to added supply-chain wide efficiencies, coupled with activities that can have direct impact to the revenue growth lever, such as supply chain segmentation, applied use of disruptive technology and continued corporate sustainability efforts. Both are not mutually exclusive and each can complement the other.

We could not agree more. 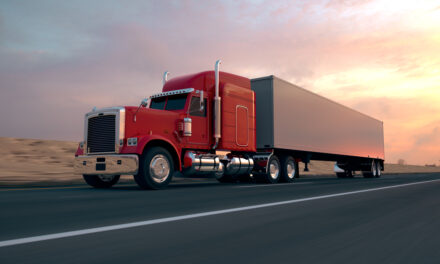