Contrast in Political Influence: Apple Can Continue to Build Mac Pro Computers in the United States

In a prior Supply Chain Matters blog commentary, we cited a Wall Street Journal published report reinforcing that the current level of increased tariffs were taking a damaging toll on U.S. small businesses. The sum total of that report was that while small businesses have little recourse but file individual appeals and provide detailed evidence of business or financial harm, while larger, global-based companies can often rely on connected lobbyists and sheer industry influence on U.S. government officials to gain attention and action.

An example of that very effect comes on this week’s reports that global consumer electronics manufacturer Apple is now indicating that it will retain its Mac Pro U.S. production sourcing, reversing earlier indications of plans to shift Mac assembly to China. Apple had most recently contracted with electronic manufacturing services contract services provider Quanta Computer to assemble the high-end computer at facilities outside of Shanghai. The Mac Pro is currently assembled in Austin Texas by contract manufacturer Flex. 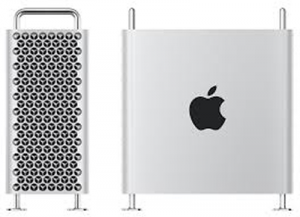 This action follows a move last week by the Trump Administration to grant tariff exemptions on 10 component products that the consumer electronics giant currently imports into the U.S. The components which include a power supply and a logic board, reportedly cover a period of over a year, from September 2019 through August 2020, which U.S. agencies will refund tariffs previously paid by Apple. The Wall Street Journal additionally reported that Apple was granted a tariff waiver relative to the Mac Pro graphics processing module which incorporates 1600 components and is similarly imported from China.

In a statement released on Monday, Apple CEO Tim Cook personally thanked the Trump Administration in: “enabling this opportunity.” In a recent July 30 quarterly financial performance briefing, Cook indicated to investors that the company would seek exclusions for China produced components in order to continue assembling a portion of Mac Pro computers in the United States.

In a prior Apple focused blog commentary published in June, and a later update published in August, we alerted readers to Asian based reports that Apple was requesting major suppliers and contract manufacturers to evaluate the cost implications for the shifting of 15 to as much as 30 percent of existing iPhone and other finished product production capacity from China to other Southeast Asia regions. Suppliers were reportedly already indicating that such moves would take added time and imply added cost or service response factors. Our August update pointed to reports that Asia based and highly networked equity analyst Ming-Chi-Kuo had reported that Apple was prepared to absorb any U.S. cost increases as a result of added tariffs, while alternative manufacturing capability is developed.

We further observed that Tim Cook must cautiously evaluate the impacts of five million China based jobs and lucrative market access, with the added pressures of the Trump Administration on having more consumer electronics manufacturing sourced in the U.S. Reportedly, Cook had personally met with senior Chinese government officials and President Trump. To little surprise, Apple iPhones were thus exempted from the December round of Trump Administration added U.S. import tariffs.

Indications remain that the latest series of announced new iPhone models will be indeed remain assembled in China. Indeed, Apple has successfully fended-off efforts by two prior U.S. Presidential Administrations seeking to add some level of iPhone or other consumer electronics assembly in the United States. Instead, Apple continues to tout termed aggressive U.S. based investments in product and supplier development. Yet, such leading-edge components and devices continue to be shipped to China and other parts of Asia for final assembly needs.

We elected to contrast this Apple development for our reader audience because it demonstrates that indeed, large global based manufacturers indeed can leverage political and job influence to leverage political policy and decision-making.

Apple has not only gained an exemption in its ability to continue tariff-free imports of newly manufactured iPhones in China, as well as maintain its manufacturing margin considerations for manufacturing sophisticated Mac Pro computers in the U.S. as well.

The takeaway is that many manufacturers, retailers and businesses do not possess such influence and leverage, and in most cases, political and market influence outweighs policy decisions.

That reinforces an argument that while small businesses can often spur industry and market innovation, a global market landscape that presents less than open markets and political favoritism indeed stifles growth and innovation. Additionally, when up and coming businesses seek to build and nurture domestic supply network and manufacturing capability, such innovation is also thwarted.

As an example, while a global based retailer such as Walmart continues to sponsor and nurture U.S. businesses in added consumer goods sourcing and manufacturing in the U.S., tariff wars claim SMB casualties, both in financial and in domestic supply network dimensions.