In a matter of a couple of weeks, commercial aircraft manufacturer Airbus has modified its previous outlook to what can only be considered much tougher messaging for internal employees and associated supplier networks. Thus, are the fast-moving events related to the business and associated industry supply chain impacts being brought about by the COVID-19 coronavirus pandemic.

In a Supply Chain Matters industry  commentary published on March 23, we made reference to statements made jointly by Airbus’s CEO and CFO indicating to reporters and analysts that the company had a strong balance sheet the liquidity available to cope with additional cash requirements. That stated, the manufacturer announced temporary suspension of a prior announced stock dividend program, as well as curtailing operational costs where possible. 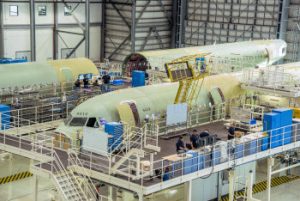 In a letter to all employees on Friday of last week, Airbus CEO Guillaume Faury did not mince words: “The survival of Airbus is in question if we don’t act now.” He further stated that the aircraft manufacturer was “bleeding cash at unprecedented speed.”

The comments not only came after the prior for measured statements by senior management, but also after a decision made earlier this month to cut monthly production levels by one-third across all commercial aircraft programs. That would equate to single aisle A320 family production cut to 40 aircraft per month, from recently announced plans to boost production among five assembly facilities to 67 per month. For the A330 wide-body family, production is now adjusted toward two per month, while the A350 is adjusted to six per month. Now, the revised plan is likely subject to added changes.

In his employee communication, the CEO indicated: “In just a couple weeks we have lost roughly one-third of our business. Frankly, that’s not even the worst-case scenario we could face.” Later in the letter the CEO indicated: “We are living through one of the largest economic shocks in history, so we must consider all options.” In essence, Faury communicated that further job and other cuts are likely forthcoming.

Already, actions are being taken to adjust workforce needs.

This week the BBC and other media reported that 3200 workers located at the North Wales wing assembly facility will be furloughed for three weeks under the United Kingdom’s job retention scheme which pays employees 80 percent of existing salaries. Airbus reportedly will provide an additional 5 to 10 percent of impacted furloughed employees. Similarly, 3,000 workers in France will be furloughed under government-assisted schemes, with more anticipated.

Other cuts have been announced for the manufacture’s Space and Defense business and manufacturing units.

Industry insider and analyst reactions, in some respects, is somewhat similar to that reflected in our Boeing commentary, an industry riding with multiple years of pent-up order backlogs to a condition of little or no demand.  Global airlines are struggling both operationally and especially financially, and observers increasingly come to the view that this industry is not likely to see any return to a revised normal of air travel for several additional years. The reality of thousands of parked idled aircraft, not just Boeing 737 Max aircraft, will haunt this industry. That reality is further cascading across the industry’s supply and services networks, with added cuts in the offing.

That stated, governments remain sensitive to an industry that serves as a critical capability in technology and job creation, but governments have only so much money to buttress the industry. This will likely be the industry and supply network that will be most top of mind in discrete manufacturing for a long time hence.