China’s Economic and Manufacturing Growth in 2020 Was Impressive

Today the government of China’s National Bureau of Statistics  announced that the country’s economy expanded 2.3 percent during 2020, in essence validating that China was the only economy to grow in a year significantly disrupted by the COVID-19 pandemic.

While the country’s economic performance was not at the level of prior year growth that averaged 6 percent annually, it was a noteworthy demonstration of production and supply network resiliency. It was about this time last year that indications of a significant virus outbreak was occurring in the City of Wuhan and across Hubei Province. The rest will be certainly noted in economic and supply chain management case study.

Much of this growth is being attributed to the country’s export surge last year, as factories that were largely not impacted by the virus in the second half of the year went all out to meet multiple industry supply network demand needs. Exports reportedly grew to their highest level on record, a record $3.6 trillion according to China’s General Administration of Customs. That effort has been manifested by the surge of global container shipments emanating from the country and surpassing U.S. port inbound container volumes milestones thru December of 2020. 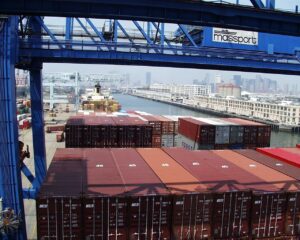 Bloomberg recently noted that Chinese factories exported 224 billion face masks in the period of March through December of 2020 with a value of $53 billion which equates to an estimated 2 percent of China’s exports in 2020. A Chinese official is quoted as indicating that the output was equivalent to: “.. almost 40 for every man, woman and child on the planet outside of China.” Further noted was the export of almost 100 billion yuan of other personal protective equipment. As a whole, exports of medical equipment and medicines grew by 31 percent, according to the report.

From our Supply Chain Matters point-of-view, this data reinforces some beliefs that China continues to cement its track record as the factory of the world especially in times of global supply network disruption. Yet, as we have noted in our 2021 Predictions, there remains business board room concerns regarding the need for added resiliency of business and industry supply networks, beyond a single region. This will likely lead to increased efforts toward regionalization of sourcing. In the particular case of medical supplies, PPE equipment and general healthcare delivery supply networks, government domestic policy concerns will especially be focused on too much dependency on China.

Next week, Supply Chain Matters will be featuring more in-depth highlights of our individual 2021 predictions, including augmented resiliency in in global supply network strategy.