The C919 was developed by state-owned Commercial Aircraft Corp. of China (Comac) and was originally unveiled in 2006. Supply Chain Matters initially called reader attention to this program in 2010. The C919 program is very significant since it represents China’s efforts to be recognized as a competitive global manufacturer of commercial single-aisle aircraft. A short video of the unveiling ceremony can be viewed at the UK’s The Telegraph reporting web site.

China represents one of the biggest global aviation markets but has seen Boeing and Airbus aircraft models compete and deploy among various China based airlines. The multibillion-dollar effort to create a homegrown jetliner is aimed at clawing back some of the commercial benefits that flow to foreign providers. However, with its maiden flight scheduled for next year and at least another three years of test flights, it will take some time before the single-aisle jet can fly commercial air routes across China and globally.

Versions of C919 can seat 158 to 174 passengers with a standard range of upwards of 4,075 kilometers. Its current supply chain consists of more than 30 foreign firms including CFM International, Honeywell and Rockwell Collins who have supplied key components. Thus the program must rely on key foreign-based technology, including composite materials, in its current value-chain. According to China’s Xinhua News 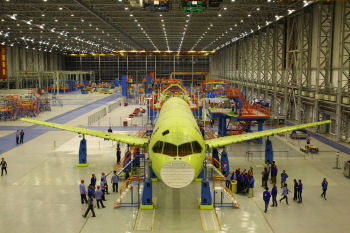 Agency, upwards of 12 percent of the C919 airframe include advanced composite materials.The significance of the reliance on the existing global supply chain is even more significant given that when this aircraft reaches full certification and production release, aerospace supply chain will have reached unprecedented and untested levels of monthly production output.

Comac indicates that it has booked 517 orders from 21 foreign and domestic customers for the C919.

According to business media reports, both Airbus and Boeing extended congratulations to Comac and welcomed new competition in their markets.  When the C919 does enter commercial service, it will likely be competing with the newest versions of the Airbus A320 neo and Boeing 737 Max aircraft models possibly placing the aircraft at a competitive disadvantage. But, as a state-owned company, Comac will surely garner purchasing influence among China’s domestic air carriers.

The C919 truly represents China’s efforts to be recognized as a viable player in commercial aircraft design and manufacturing, and as such, this is an important program to watch in the coming years.