The Supply Chain Matters blog provides our first update on what supply can management teams should expect during the now ongoing 2019 holiday fulfillment surge.

This weekend, one of the globe’s largest single online shopping events kicks-off with China’s Singles Day Global Shopping Festival, often described as a 24-hour shopping extravaganza that occurs on the 11th day of the eleventh month.  Readers should also take note of the new title and the operative word “global.”

This event started out as Singles Day in 1993, when students at a university began hosting singles parties meant to counter the negative social stigma associated with singlehood. Since this was a holiday designed to bring singles together, they chose the date with the most one’s to celebrate. This holiday was then amplified by China’s dominant online provider Alibaba to provide greater meaning and visibility, not only across China, but increasingly to other countries.

Alibaba indicated that it booked $30.8 billion in gross merchandise value (GMV) sales during last year’s one-day event’ surpassing the 2017 revenue milestone of nearly $25 billion. A staggering $4.7 billion in sales were booked in the first 10 minutes of the shopping event. That volume far exceeds that of the Black Friday thru Cyber Monday online shopping events held in the U.S. and other countries. Last year’s festival reportedly featured merchandise from upwards of 180,000 Chinese and global branded merchandise.

Alibaba has plans to make this year’s event, the largest ever, both in scope and in termed New Retail dimensions that combine online and in-store shopping experiences and bargains. According to a report published by the South China Morning Post, (owned by Alibaba) the online provider is hoping to attract an additional 100 million consumers based on its analysis of data and consumer behavior but declines to provide targeted sales value. Upwards of 200,000 merchandise brands are expected to be offered this year with 500 million customers expected to participate.

But some media outlets have expressed doubts as to whether this year’s event will break new records given this year’s economic climate across China and its neighboring countries. There have also been speculation as to whether U.S. branded goods will be shunned, given the ongoing trade war tensions among the two countries.

The event is preceded by a slew of highly publicized product promotions and a dedicated TV broadcast the night before, featuring a global celebrity. This year’s show features pop celebrity performer Taylor Swift. She will join joins celebrities from Chinese singer G E M to Japanese voice actress Kana Hanazawa.

The planning for Singles Day activities is extensive and obviously involves months of preparation and process testing not to mention a lot of technology investment. 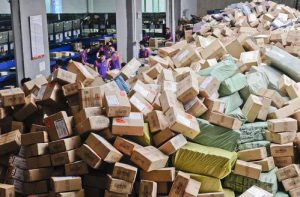 In the days during and after the actual event, logistics entities across China are literally swamped with parcels to be delivered, rivaling and likely exceeding Black Friday weekend volumes. (Note the image from last year’s event)

Increasingly, logistics companies across the country, and especially Alibaba’s logistics arm Cainiao, have been investing in advanced robotics, automated material handling systems enhanced by artificial intelligence to assist in processing and handling the expected surge resulting in the 24-hour event.

This week, Alibaba reported financial performance in its latest quarter, the first report since co-founder Jack Ma stepped down as Executive Chairman. The online provider reported a 40 percent increase in revenues with profits nearly tripled in the latest quarter, despite what Business Network CNBC reports as a saturated E-commerce market. The online retailer’s online retail business in China reportedly accounted for 64 percent of total sales in the quarter.