Hurricane Florence and now Typhoon Mangkhut continue to impact both the U.S. and portions of Asia. Multi-industry supply chains continue with activating disruption and risk mitigation measures in a critical period.

Hurricane Florence made initial landfall on early Friday near Wilmington Carolina and as we pen this Supply Chain Matters blog, continues to batter the North and South Carolina region with heavy rains and flooding. 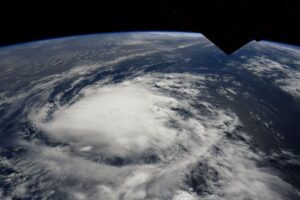 Thus far, there are reports of 15 tragic deaths and upwards of one million who have lost power. The now tropical storm turned south after initial landfall and slowed to a near crawl, dumping torrential rains on the region. More than 30 inches of rain has already fallen in parts of North Carolina with more expected thru Tuesday. Once more, weather forecaster’s and Federal Emergency officials are warning that the worst is yet to come, with rising flood waters, swollen rivers and mudslides potentially leading to “catastrophic and life threatening” conditions. Officials are also warning of environmental hazards caused by a large number of manure laded “hog ponds” across North Carolina and a significant spill of coal ash from a public utility power plant near Wilmington North Carolina. Electrical power outages are currently estimated to extend out to weeks. Major North-South interstate highway 95 has been closed in areas of North and South Carolina due to flooding, impacting transportation.

As noted in our initial Hurricane Florence posting, the region has a significant manufacturing, transportation, and agricultural presence. The Port of Charleston serves a large manufacturing presence in the Southeastern United States. After closing for two days, the port was expected to be operational today. Likewise, the Port of Virginia is a major container port serving this region.

As the flood peril continues in the region, many manufacturers are likely to be impacted in one form or another. There is a large presence of global based automotive and truck manufacturing in the region. Boeing also has its 787 aircraft production assembly facility located near Charleston and the aerospace manufacturer initiated a response plan to fly staged aircraft and other materials to Seattle, Boeing‘s other 787 facility for temporary production.

Typhoon Mangkhut, which meteorologists have depicted the most powerful storm in the world, swept across the northern portion of the Philippines leaving a wide path of destruction. The storm has reached peak winds of 170 miles per hour initially before landfall. The storm had initially threatened Luzon which is further south, an area of more than 12 million people but turned northward.

At least 54 deaths have been reported and the death toll is certain to rise.  Likewise, there are reports of massive flooding, landslides, and power shortages. The impacted region is described as the nation’s largest food producing region.

The massive storm has moved on to impact Hong Kong and Southern China. Indeed, the next few days and weeks will again be challenging. Again, as we pen this commentary, more than 2.45 million people have been evacuated in China’s Guangdong province as Mangkhut made landfall at 5 p.m. local time, according to Chinese state media. Hong Kong itself was impacted by fierce winds that tore off roofs, downed trees and caused cranes perched atop half-built skyscrapers to swing ominously, according to published reports. Hong Kong’s Victoria Harbor was reportedly hit with a storm surge of more than 3.9 meters (12.8 feet) on Sunday. More than 550 flights at airports in Hong Kong, Shenzhen and Guangzhou were also canceled, according to Flightaware.com.

The storm is now expected to move inland of western Guangdong packing significant winds and rains.

As high tech and consumer electronics supply network teams are fully aware, the Pearl River Delta region is a key design and production area for that industry, and now today, for the automotive and electric car industry. So it is for apparel and footwear brands as-well.

No doubt sales and operations planning  teams will be paying close attention to news and supplier updates in the coming hours and days.

Hurricane and typhoons often come at the most critical periods of a business calendar. With industry supply chains gearing up for the all-important final quarter of the year, and with high-tech supply networks ramping-up production to support the holiday quarter, supply network agility and resiliency plans will once again be put to the test.