Posted by ferrariadmin | Oct 9, 2014 | Procurement and Sourcing, Transportation and Logistics | 1 | 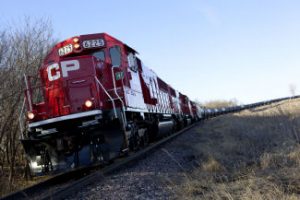 networks heavily burdened by surging crude oil transport demand and compounded by severe winter weather.  The problem was a classic capacity-constrained network, as winter conditions incurred a heavy toll on equipment and schedules. At the time, the railcar shortage was expected in extend further into this year.

A published Bloomberg report in August reported that upwards of 10 to 15 percent of last year’s grain crop still remained stored in silos because of the continued lack of availability of specialized bulk rail cars to transport the crop. Some contracts for delivery of grain from as far back as March remain unfulfilled in August.

An expected high U.S. spring wheat crop began harvesting last month and must now be either stored or sent on bulk railcars to end-markets and export ports. Growers were concerned whether railroads would ever be able to catch-up with compounding backlogs.

There is now have another data point to consider.  Last week, CP outlined a series of aggressive financial targets that included a doubling of earnings by 2018. One-third of the expected new revenues is expected to come from added crude-oil transport from both the Alberta and North Dakota Bakken region, While today, Bakken crude represents 60 percent of CP’s unit volume, plans call for shifting that percentage toward the Alberta region.  According to industry reports, Alberta crude is less volatile in transport, and CP is obviously betting that Alberta crude will be in more demand for rail transport needs.

To accomplish these financial and operational objectives, CP has plans to increase crude shipments upwards of 60 percent in 2015 while expanding specialized crude terminals in the Alberta region.

From our lens, the above is not good news for U.S. and Canadian farmers.

Shifting an already overburdened CP rail network further north could well take more capacity away from U.S. Midwest use. If currently harvested grain and other crops become just as log-jammed as last year, the situation may get far uglier, especially considering that both U.S. and Canadian rail networks are now running under constricted speed requirements in transporting crude.

We would appreciate hearing the views of farmers and operators on the ground, dealing with the current bulk rail transportation challenges.  Do you feel this planned network shift by CP will compound current logjams?

Either share your observations in the Comments area below this posting, or send us an email: info <at> supply-chain-matters <dot> com