To state the obvious, this has been a week of significant industry developments mostly all pointing to implications for industry supply chain structural change. Having just published our initial commentary on the thunderbolt developments in traditional grocery retailing, we now add more evidence of building disruption, in this case, for automotive supply chains.

Tim Cook has finally publicly acknowledged that Apple has a formal development effort underway focused on Autonomous Driving Systems. In a published interview on Bloomberg Television, Cook indicated: “It’s a core technology that we view as very important.” He likened the effort to “the mother of all AI projects,” saying it’s “probably one of the most difficult AI projects to work on.” 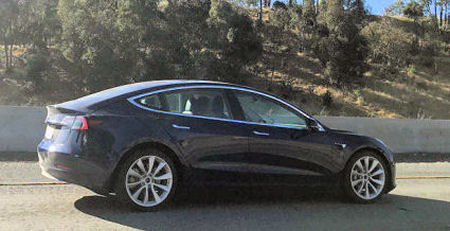 As Supply Chain Matters and other business focused social media outlets have all previously noted months ago, Apple’s efforts in either autonomous driving or electric vehicle manufacturing, under the umbrella of Project Titan, were an open secret. While the effort itself has had its share of fits, starts and scope changes, Cook’s public acknowledgement is an obvious indication of a purposeful and meaningful business initiative that could soon lead to further announcements. With all things related to Apple, timing of announcements is always a prelude to an evolving marketing or pre-planned corporate communications plan to boost brand and investor interest.

In its summary of the interview, Bloomberg notes that Apple has had upwards of a half-dozen vehicles testing autonomous technology on public roads in and around the San Francisco Bay area for at least a year, citing a source familiar with Project Titan. Of course, Apple itself declined to comment on how long the company has been conducting road tests.

An opinion commentary penned by EnerTuition, and hosted on the Seeking Alpha financial investor platform addressed the question: Can Apple Disrupt Automotive Manufacturing?  Without fringing on content rights, the arguments presented for the affirmative are by our view, powerful and dead-on.

The content makes a strong case that there is little doubt that Apple will enter autonomous car manufacturing, with the primary reason being that Apple never considers itself as just an IP or software components company. There is always the full branding strategy of products and related services.

Further challenged is the conventional industry thinking that “the auto industry cannot be disrupted” because of the capital-intensive nature of this industry. While the statement has meaning for traditional automotive manufacturing that is hardware, metal and sheet metal intensive, the counter argument presented is that autonomous electric vehicles provide a far different product value supply chain profile. That includes batteries as the highest cost-of-goods sold (CAGS) component, followed by vehicle sensors and software systems. The assumption presented, although somewhat future focused by our view, is that there will be no need for human factors such as steering wheel placements and instruments, which opens consideration for a singular global product design and manufacturing process.

The most interesting and profound opportunity for disruption is within the core area of manufacturing.

The argument made is that with most of the value-added of electric powered cars consisting of electronics vs. sheet-metal, and with the change coming so rapidly, manufacturers or industry disruptors will have little choice but to adopt a contract manufacturing strategy. With such a strategy, EnerTuition argues that the supply chain dominants will become emerging automotive component sub-systems and electronics providers, augmented with existing high-tech electronics contract manufacturers. Names such as Foxconn, Flextronics and Jabil are argued to grow more share of contract automotive manufacturing.

The above, ladies and gents, is a rather strong argument to support how Apple can indeed move directly into automotive manufacturing, because of its intimate knowledge and proven capabilities to understand the tenets of supply chain strategy and utilization of contract manufacturing. And, if you tend to dismiss any parts of the above arguments, consider that Apple, with its obscene cash balance, could acquire an electric automobile manufacturer itself. Guess which one- it starts with a “T”.

The reason we are highlighting this Seeking Alpha commentary for our readers is because this Editor and independent supply chain management industry analyst has been observing new and emerging positioning and capability among contract manufacturers and the industry that points toward such technology-driven changes.  Recall that just recently, Ford Motor elected to undergo a CEO change because of the stated need to move faster in technology innovation and in development efforts in autonomous vehicles.

There is ample evidence that disruption is indeed on the horizon soon, and traditional auto manufacturers and their key suppliers may be the deer in headlights if they do not move fast enough with an integrated product development and supply chain support strategy