Just days before the scheduled first customer delivery of the new Boeing 737 MAX aircraft, the commercial aircraft manufacturer has had to suspend ongoing flight testing after being notified by the engine supplier of what is believed to be an engine component manufacturing problem.

According to various published reports, Boeing was notified by aircraft engine provider CFM International about a “quality concern” related to the low-pressure turbine (LPT) discs installed within the new CFM LEAP-1B engines. A collection of five LPT discs with attached blades sit at the rear of this new, more fuel-efficient engine. 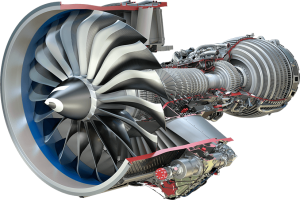 Boeing spokespersons have indicated that the test flight suspension was ordered “out an abundance of caution.” Boeing further indicates that no operational problems were detected during the ongoing series of test flights. Affected LEAP 1B engines have been dispatched to CFM’s facilities for further inspection.

Reports are quick to point out that the engine problem is not engine design related but initial news of the suspension caused Boeing stock to initially drop nearly 2 percent.

As our Supply Chain Matters and aerospace supply chain industry readers may be all too aware, the industry remains sensitized to ongoing engine design issues. Specifically, design issues related to Pratt and Whitney’s new geared-turbo fan (GTF) engines which have impacted Airbus A320 neo customer delivery schedules and are still be addressed. CFM supplies an alternative engine, the LEAP 1A, as an option to the A320-neo, and those engines remain operational with some airlines. Initial indications are that the problem related to the 1B version are not affecting the 1A model.

A published report by the Seattle Times indicates that CFM informed Boeing late last week of a potential quality issue with the LPT disks within prior-delivered engines. CFM quality inspectors discovered an anomaly in the manufacturing process related to forging the discs.  As is often the case, LPT discs are provided by multiple suppliers, and the problem may rest with a single supplier’s discs. Thus, the likely steps underway are determining which specific engines included the suspect discs and assuring that all other discs meet manufacturing and performance specifications.

The irony of this news is that the 737 MAX program had repeatedly been reported as being ahead of schedule with very few issues. There have been upwards of 2000 hours of flight tests with first customer delivery to launch airline customer and Malaysia based Malindo Air, a subsidiary of Lion Air scheduled for later this month. Boeing indicates that the delivery will go ahead as planned, along with scheduled May delivery to Norwegian Air.

Boeing further indicates that production plans for the 737 MAX remain as planned, obviously with an expectation that the engine issue is temporary in nature.

Product management, procurement and supply chain teams are acutely aware that despite rigorous planning and testing, a supply or manufacturing glitch can occur at any time during a product lifecycle.  The challenge is often in the timely detection, the response, and the mitigation plans. This week, commercial aircraft supply chains have yet another current reminder that even the best planned programs are subject to unplanned events.

Alcoa’s Proactive Acquisition and Product Innovation Efforts Are Paying Off