Reuters reports that at an investor conference held last week, the aerospace manufacturer’s CFO indicated that will not increase 787 output and could further cut 777 product output levels unless sales of both jets improve. 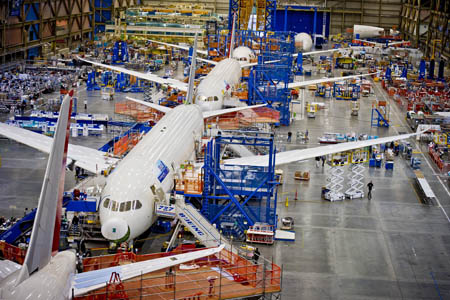 Last November, a report indicated that Boeing was planning to deliver a total of 140 new 787’s to customers in 2016. That averages out to roughly 12 aircraft per month among the two designated final assembly facilities in Seattle and Charlestown South Carolina. Boeing’s plans were to increase the monthly production rate of completed 787’s from the current 2016 level of 12 to 14 per month in 2017. Last week’s statement would indicate that Boeing is now re-evaluating that decision in the light of softening customer demands to take delivery of 787 orders as well as general resource cutbacks to boost the manufacturer’s near-term profitability.

An earlier posting appearing on the ALL Things 787 blog indicates that: “near term deliveries of the 787 look to slow down due to unspecified issues with the thrust reversers affecting both GE and Rolls Royce powered aircraft.” The issue affects certain models or variants of the aircraft. The posting further indicates that just when followers of the 787 program thought that the program starting to emerge from the financial black hole that was created, it was sucked right back in with Boeing’s announcement of an incredibly high charge of $847 million against second-quarter 2016 earnings.

The blog indicates that with the 14 deliveries accomplished in July, Boeing has delivered 82 787’s this year through the end of July.   That would imply that 58 remain to be delivered to meet the prior 2016 production goal. A subsequent blog posting noted that Boeing’s South Carolina facility will shut down for about 11 days (between August 22 and September 2nd) to allow suppliers to retool for 787-10 production that will start later this year., which could reduce August total output numbers.

Regarding the 777, Reuters re-iterates the 777 is slated to be replaced with the new 777X.  As we have noted in our prior Supply Chain Matters commentaries, Boeing has been offering sales incentives for the 777 model to certain airlines in order to maintain production and capacity levels prior to ramp-up of the newest model. The fact that Boeing is re-visiting a production cutback may well be an indication that airline customers are differing any buying decisions until the newer model is released.

Finally, Boeing also indicated that it will soon entirely phase-out the iconic four engine 747 model because of slumping demand. Apparently orders for new replacements of U.S. Presidential jet Air Force One have been the only real highlight of that program.

Even Newer Innovations in 3D Printing and Additive Manufacturing Emerge

How the Ebola Outbreak Can Impact Industry and Global Supply Chains