Published data reflecting April 2021 global and regional purchasing and manufacturing indices (PMI) reinforces that global production remains at full throttle. However, they point to even more headwinds in supplier lead times, extreme cost pressures and now added transportation bottlenecks, all of which is becoming highly visible.

Industry supply chain management teams have the opportunity to once again pivot to provide positive revenue growth opportunities for businesses. However, achieving on-time customer satisfaction needs while meeting budgeted product cost and margin objectives remains a tall order. The thumbs-up of 2020 could well turn into the thumbs-down of 2021 regarding the perceptions on multi-industry supply chains.

The J.P. Morgan Global Manufacturing PMI® report, a composite index produced by J.P. Morgan and IHS Markit remained at a ten-year high level, with a reported value of 55.8 for April. The report authors summed up April’s activity as intense with average supplier lead times increasing to record levels, and the rate of work backlogs among global manufacturers at a 17-year high.

Total new orders and new export business both reportedly rose at the quickest rate since May 2010. Similarly, and consequently, average producer prices are reported to be rising to the greatest extent as-well, with manufacturers now passing parts of cost increases along to customers in the form of higher selling prices.

As Supply Chain Matters editorials have noted, industry supply network challenges such as the global wide shortages of semiconductors, certain grades of steel, along with certain plastics within North America, are collectively impacting various industries. After a six-day containership blockage in the Suez Canal in April, there remains a massive disruption in global shipping scheduling and service levels.

As noted in the graph below, global output levels remain at a six-year high, and yet alarm signals are blaring across the board. 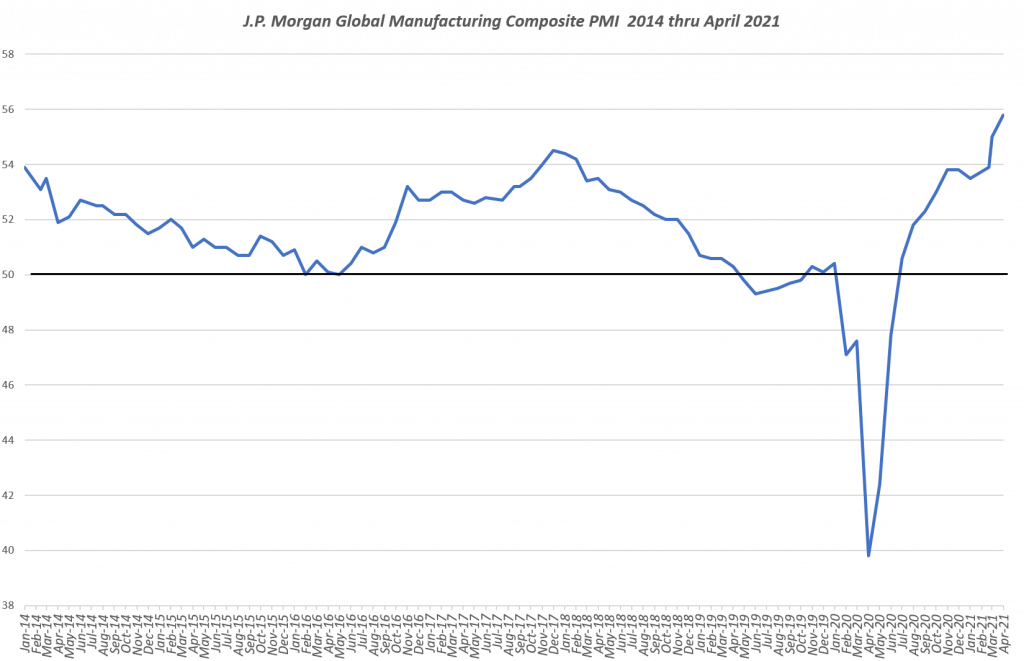 China again provided mixed signals in terms of production. The Caixin China General Manufacturing PMI®, which is generally weighted toward smaller private manufacturers, rose to a reported four-month high to a value of 51.9 for April. The authors noted that total new orders rose for the eleventh month running with manufactures widely commenting on improved market conditions and increased customer demand. That stated, panelists pointed to increased raw material shortages and logistical delays have driven declines in supplier performance. Input price increases were noted as the highest since November 2017 with higher costs now being passed on the customers.

China’s PMI index produced by the nation’s Bureau of Statistics, which tends to be weighted toward large enterprises and state-owned manufacturers, fell to a value of 51.9 in April, missing market expectations. The statistics bureau pointed to global chip shortages, global shipping disruptions and rising delivery costs all weighing on production output levels. New orders and export sales reportedly grew at modest rates while input costs and prices continued to rise.

Reports indicated that China’s economy grew 8.3 percent in the first quarter, reflecting continued momentum from 2020 levels. That number was the highest economic growth reported since the country began reporting quarterly GDP in 1992.

As Supply Chain Matters opined in our summary of March and Q1 2021 PMI data, the warning sirens are blaring for multi-industry product demand and supply networks. There remains robust product demand from all three sectors of investment, intermediate and consumer goods. In developed economies, consumers continue robust buying of pandemic related as well as post-pandemic goods.  Manufacturing facilities across the globe have ramped-up capacity but are hampered by more volatile disruptions in inventory needs and dramatically increasing material input costs. Worker skill shortages have become even more visible and are hampering the ability for manufacturers to be able to respond to market demand.

Supply chain disruptions have further reached the concern levels of investors as manufacturers, retailers and other businesses report their financial performance. CEO’s and CFOs are now explicitly mentioning supply chain related challenges in the context of shortfalls or risks to revenue performance. Many companies are beginning to raise prices for end goods because of the ongoing supply chain volatility levels and added disruption and that will add further to price inflationary pressures.

In 2020, industry supply chains were generally viewed as the saviors of the global economy and for the ability of consumers and customers to receive essential goods.

This year runs the risk of the opposite, supply chains being blamed for sticking the pin into the post-pandemic recovery.

In normal times, Q2 would be a period where supply chain management teams get the opportunity to plan for the second half of the year, which is usually a period of higher demand.  This year, planning, re-planning and response is continuous and ongoing with little down time. The risks of bullwhip are real, given the tendencies of product demand that continues to outstrip both production and transportation supply.

Indeed, teams will be challenged, and this is when prior investments in technology and process enhancements will make a visible mark.