Another Incident Involving the Airbus A380

Troubling issues concerning aviation and aerospace supply chains are not just confined to Boeing.  Rival Airbus has also been dealing with its own challenges, and this week presented yet another concern related to its massive A380 jetliner shown in our pictorial. 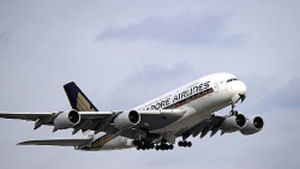 In past weeks, after the appearance of cracks appearing in parts of the wing of the A380, European air safety officials ordered an inspection of the entire fleet.  It has since been reported that these minor cracks were found in almost all of the fleet.  Airbus claims it will take considerable time to resolve the problem.

Readers might also recall the potentially devastating blowout of Rolls Royce Trent 900 engine in September 2010 involving a Qantas Airways A380, forcing an emergency landing in Singapore, and subsequently the grounding of the entire fleet for weeks. A result of that incident was a confidential settlement between Qantas and Rolls Royce involving a reported $100 million. Other reports indicated the cumulative costs to Rolls for having to fund the inspection, repair and airline damages of all engines throughout the supply chain to be roughly $190 million.

Last July, an A380 flying from Singapore to Hong Kong was forced to return after an engine shutdown.

This week provided yet another incident.  A Singapore Airways A380, this time traveling from Singapore to Frankfurt, with 430 passengers on board, was involved in an engine incident forcing the aircraft to return to Singapore after about three hours of flight.  Fortunately for the plane’s many passengers, the aircraft returned without further incident and passengers were transferred to another aircraft. Reports indicate that an engine surge in the number three engine, which was also a Trent 900 Series, was the probable cause.  Singapore Airways issued a statement indicating it was working with both aviation authorities and Rolls Royce to determine cause and probable actions.

Airbus’s new composite materials A350 passenger jet development program, a response to the existing Boeing 787 Dreamliner has also suffered a series of recent setbacks. The company made the decision to delay the plane’s introduction from late 2013, to the first half of 2014 by concluding that certain supplier components were not of acceptable quality and it was necessary to “stop and fix” the program.

In the world of aerospace, and its associated supply chains, risks incur both in the product development, production and after-market phases of the aircraft’s product lifetime.  As manufacturers continue to drive more advanced engineering and innovative, but complex components, the risks get higher and implications to highly stressed supply chains magnify even further. It seems that no manufacturer nor supplier is immune and the stakes continue to get higher. Now more than ever, broad visibility and supply chain agility are the competencies for meeting business needs.