In our industry specific coverage of commercial aerospace supply chains, Supply Chain Matters has featured  a number of prior commentaries concerning Bombardier’s CSeries aircraft program, and the program’s efforts to penetrate single-aisle commercial aircraft market with the likes of an Airbus, Embraer or Boeing. Recent setbacks have impacted the CSeries program and yesterday featured an announcement that Bombardier’s senior head of commercial aircraft sales had resigned due to personal reasons. 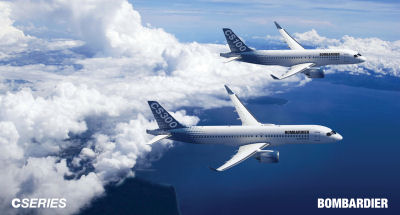 We have provided a focus on the CSeries for three primary reasons.  First, the program was Bombardier’s attempt to emulate a globally dispersed ecosystem of supply chain of major aircraft components to spawn program innovation and reduce overall program and production costs.  Major components such as fuselage wings and tail are sourced in China, Ireland, Italy, and other countries.  The C-Series continues to be targeted towards operational service among regional airline routes while delivering upwards of 20 percent fuel savings over existing smaller, single-aisle regional aircraft. The goal of the program was to: “revolutionize the economics and network strategies for airline operations in the 100-149-seat commercial market.”

Bombardier is also one of the largest and most prominent manufacturers in Canada, and like other commercial aircraft manufacturers, hosted governments and supply chain partners have a vested interest in product success and increased employment of workers. Thirdly, as we have noted in prior commentaries, the ultimate success of the C-Series was predicated on a very timely and competitive market introduction along with being more nimble than other competing aircraft manufacturers. This aircraft was originally targeted for market entry in 2013.

A Wall Street Journal front page article published today (paid subscription required) begins to cast doubt on both the product strategy and market competitiveness of the CSeries. The article notes that Airbus and Boeing, along with Embraer have sharpened their competitive responses through more timely development programs updating existing models such as the Airbus A320 neo version and the Boeing 737 Max. According to the article:

“Bombardier, its suppliers and governments of Canada and the U.K., where the wings are built, are now on track to plow at least $4.4 billion into the CSeries program- up from the original plan of $3.4 billion and equal to nearly two-thirds of Bombardier’s total market value.”

The WSJ quotes an unnamed Bombardier executive indicating that the aerospace provider was blindsided with competitor’s actions to utilize the same Pratt and Whitney step turbine engine technology in upgrading existing models. Global airlines are thus electing to purchase the upgraded single aisle models from established manufacturers with Airbus having booked than 3400 orders for the A320 neo and Boeing garnering over 2600 orders for the 737 Max. Established fleets and infrastructure services make introduction of a new manufacturer more risky or perhaps most costly.

Unstated but another important development is that the price of oil has currently plunged allowing airlines more time and flexibility to schedule fleet equipment changes.

At this point, after restructuring efforts, the CSeries program reports directly to Bombardier’s CEO, including leadership of commercial sales.  There is a continued belief that the aircraft will ultimately be recognized for its value.  All hands and indeed the CSeries supply chain ecosystem are focused on completion of certification and first customer delivery with the belief that this aircraft family will eventually be recognized for its value and technological features.

For engineering-driven supply chain environments, program design objectives, a pulse of ongoing market dynamics and adherence to time-to-market milestones are all very important, especially in today’s more dynamic global industry landscape. These tenants take on a  special meaning when the program’s objectives are to take on existing larger competitors when first mover advantage becomes a factor.

The CSeries will be a test of all of these principles.