This past 24 hours  have been incredible and noteworthy for transportation-related incident headlines within the United States. Continued occurrence of severe winter storms and specifically a large and broad snow and ice storm that blanketed the U.S. Midwest, West, South and Northeastern regions created a lot of transportation havoc.  Fortunately, no lives were lost and injuries were minimal.

A Delta Airlines MD-80 commercial aircraft attempting to land on a snow and ice covered runway at New York’s LaGuardia Airport skidded off the runway and eventually struck a retention barrier, just a few feet short of reaching nearby water. Fortunately, all passengers and crew were able to successfully evacuate the aircraft with only minor injuries. News reports indicated that one of the fuel tanks of the aircraft had ruptured and was leaking fuel when rescue official reached the plane, but there was no fire or explosion. The accident resulted in one of the busiest airports in the U.S. having to be closed for all operations for upwards of eight hours. As we pen this posting on the morning after, flight delays at LaGuardia are averaging upwards of two hours or more for arrivals and departures. 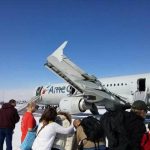 forced to evacuate its passengers after a suspected fire broke out in the aircraft’s cabin at the airport in Denver. This flight originated in Charlotte North Carolina. Thick smoke filled the cabin forcing an emergency evacuation. Social media provided passenger photos of the evacuation. A calm evacuation among passengers avoided any injuries.

A BNSF Railway train hauling over 100 tank cars containing crude oil derailed near Galena Illinois, causing a massive explosion and fire. Initial reports were that 8 cars derailed, six of which rolled over. As has been the case with these accidents, the fire was so intense that safety and fire officials have elected to let the fire burn out, which is expected to take several days.  There have been no reports of deaths or major injuries thus far.

There have been little specifics regarding the origin of the crude, nor of the class of tank cars involved, but speculation is obviously that the shipment may have involved Bakken crude from North Dakota, headed for Midwest of Northeast refineries. More specifics will obviously come forward in the next several days.

Last month, a CSX train hauling Bakken crude derailed and precipitated massive explosions and fire near Mount Carbon West Virginia. That accident is obviously fresh in the minds of U.S. regulators and now, there is yet another fiery incident. 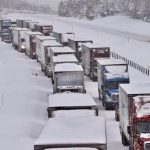 crews could not keep up.  This caused multiple tractor-trailer rigs to lose traction and subsequently block the highway for all motorists, most of which were stranded overnight. The ambient temperatures were reported as 30 degrees below normal and reports indicated that the traffic gridlock extended nearly 26 miles. Kentucky’s governor was forced to activate the state National Guard to assist in aiding and evacuating stranded motorists and haul-out stuck rigs and automobiles.  The real-time photos featured on Facebook and Twitter provided an ample sense of the gridlock.

The volume of tractor trailer traffic involved in this gridlock is because I-61 is a major east-west interstate highway that supports logistics traffic supporting many U.S. southern based manufacturing and distribution facilities.  The gridlock occurred just south of Louisville, home of UPS World Hub, and Toyota’s largest vehicle manufacturing plant in North America is located in Georgetown Kentucky, just north of Lexington Kentucky.  More than likely, manufacturing and logistics teams within these areas have experienced the effects of this winter storm gridlock.

An Amtrak Acela high speed train providing northeast corridor service and enroute to Boston was stranded by ice accumulation hampering the train’s electrical system.  This train which sopped operation near Providence Rhode Island was subsequently stranded for hours without power or heat until a rescue train could be brought in to haul it to its destination. Passengers were obviously not pleased.

Obviously this has not been a positive 24 hour period in U.S. related transportation and perhaps these incidents are ever more reflections of aging infrastructure and equipment compounded by the cumulative effects of a severe winter.

If any of readers were impacted by these incidents, share your thoughts. In the meantime, Spring cannot come soon enough.