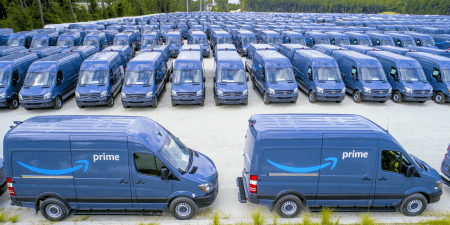 Noted in the financial performance highlights was that the online retailer experienced its biggest-ever Black Friday to Cyber Monday holiday shopping weekend, but no financial specifics were indicated.

A Supply Chain Matters commentary published in October outlined accelerated plans to prepare for the holiday surge which included an extensive bulleted listing of investments in added people, aircraft, ships and buildings. Free same day delivery was reportedly being made available in more than 90 metro areas across the U.S., 58 areas of Europe and in Tokyo. Faster same day delivery was made available across 24 metro areas in the U.S.

Amazon executives had further noted that they expected to incur an additional $4 billion in added labor, freight and supply chain related costs in the final quarter. That is reflected in the actual results.

In October, Jassy had publicly acknowledged that treating workers could be better. Additional tests of that commitment come later this month with the do over labor organizing election to be held at the Bessemer, Alabama customer fulfillment facility, a separate labor organizing petition from workers at the Statin Island, New York fulfillment complex and possibly other facilities. The International Teamsters labor union in the U.S. has further marshalled a specific effort of targeting Amazon workers for ongoing grievances and organizing activities.

The company reports that it now employs upwards of 1.6 million people globally, including an average starting wage for frontline workers of more than $18 per hour in the U.S, with added benefits including health, vision and dental insurance.

Supplemental information indicates that worldwide shipping costs amounted to $76.7 billion in 2021, an increase of 10 percent on a year-over- year basis.

Given this growth in supply chain and transportation cost increases, the online retailer announced that it will increase the price of Amazon Prime annual membership. The program which garners free shipping and added content delivery services, will rise in the coming year from $119 annually to $139 annually, or the corresponding monthly fee rising from $12.99 monthly to $14.99 monthly, for an annual total of $180. The company noted that this was the first time it had raised the price of Prime membership services since 2018. Then again, 2021 provided extraordinary supply chain cost inflation.

What continues to offset the online retailer’s higher cost structure are the increased margins and profitability generated by the company’s AWS Cloud computing business. That business unit reported 40 percent year-over-year revenue growth and a 48 percent increase in operating income in 2021. Total operating income for the AWS business segment was $18.5 billion in 2021.

What Supply Chain Matters paid particular attention to was other operating segment information. As an example, the North America business unit results indicated that net sales increased 9 percent on a year-over year basis to $279.8 billion, but operating income was $7.2 billion, down 107 percent on a year-over-year basis. In the final quarter, the unit incurred an operating loss of $206 million.

Business media such as Business Broadcasting Network CNBC and The Wall Street Journal featured headlines relative to the online retailer’s profitability resilience as well as the significant profit gain as a result of the equity investment gain related to Rivian.  Amazon’s investment in Rivian came at the time the online retailer placed an order for upwards of 100,000 electrically powered parcel delivery vans.

Yet the sub-headlines were weaker than expected sales numbers and disappointing guidance for the current Q1 quarter. A further boost can from the attractive growth in advertising revenues in both online and the AWS unit.

The overall response from Wall Street and investors likely had more to do with the concurrent double-digit cratering of Facebook parent Meta’s stock after reporting that quarterly profit missed by a very wide margin. Spotify stock also fell by double digits after reporting declines in subscriber growth.

On Friday of last week, the result was that Amazon stock notched the largest-ever one-day gain in market value for a U.S. company. Market trading boosted an added $191 billion to Amazon’s market value, eclipsing the record Apple had set after recently reporting financial performance for the holiday quarter.

It would seem that for tech and online platform stocks, investors are now more attuned to near-term performance along with elements of future recurring revenues. In the notion of online retail, the ability to overcome supply chain inflationary costs counts as a positive. But not all companies have the corporate structure of an Amazon, which serves not only as a dominate online platform but as a provider of Cloud based IT infrastructure and data management services.

The open question is how powerful and influential Amazon will be allowed to obtain without external market, regulatory or political intervention.