In conjunction with reporting another blowout holiday quarter and full year financial and sales performance, Amazon announced that Founder Jeff Bezos would turn over the CEO reigns to Amazon AWS division head Andy Jassy by the third quarter of this year.

In this Supply Chain Matters commentary, we share perspectives regarding this leadership change. Our context is a B2C and B2B supply chain, customer fulfillment and logistics perspective.

Many in business and social are already providing perspectives relative to this leadership change:

How much control will Bezos actually cede to Jassy?

Is this a sign of the next transformation of the company or a continuation of strategies already launched?

Will the change in leadership be an opportunity to address some lagging challenges facing the online retailer?

Is this a sign that the next chapter of Amazon may be in separate companies, including the AWS Cloud technology business unit?

We certainly do not have a crystal ball to foretell what this leadership change will entail but we can advise global supply chain management teams as to what to watch for. 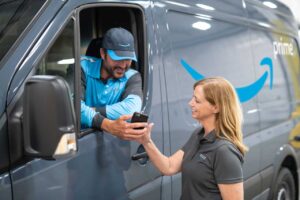 Areas to Look For

Jassy assumes the CEO leadership role with a background in marketing and Cloud based information technology. His track record as leader of the AWS Cloud technology business unit is stellar, with profitability results allowing the online provider to aggressively invest in many other initiatives. As the Economist noted in a June 2020 profile report: “The division has established the company’s credentials as a developer of serious technology on a very large scale, rather than just a user of it.”

Reportedly there were two internal senior executives being groomed to take over for Bezos. Besides Jassy, there was Jeff Wilke, the head of the online providers worldwide consumer business that includes Amazon.com. Perhaps reading the tea leaves, Wilke announced his departure in August 2020, which was a rather unanticipated announcement at the time. Commenting on the announcement, Business Broadcast Network CNBC had characterized Wilke: “to be the number two executive and a likely successor to founder Jeff Bezos.”

Wilke’s communication in August indicated that he has no plans for additional jobs and that it was just time to leave and for him to explore personal interests that have taken a back seat for two decades. Dave Clark, the online provider’s Senior Vice President of Operations that includes all customer fulfillment and worldwide logistics operations was tapped to succeed Wilke starting at the beginning of this year.

From our lens, Clark’s role is now pivotal for the continuity of online retail business growth and global operations management. Both Wilke and Clark were members of Amazon’s noted S-Team, a reported close-knit group of senior executives that manage and oversee all of Amazon’s efforts. In conjunction with the announcement of Wilke’s departure, Bezos announced three new members of this executive body, one of which is female. They included:

The groundwork of executive leadership transition was obviously in-progress and will likely have a year’s tenure by the time Jassy assumes his overall leadership role sometime in Q3 of this year. The S-team will be pivotal in initially supporting Jassy’s lack of direct retail, supply chain customer fulfilment and state of the art logistics operational knowledge.

As we have noted in our 2021 Predictions, Amazon has undergone increased scrutiny and increasing backlash from various global legislators regarding the company’s aggressive, take no prisoner’s competitive business culture. Both the European Commission and a U.S. Congressional Subcommittee have accused the online provider of exerting “monopoly power” over sellers on its platform. Such scrutiny is likely to continue and will occupy the time of the new CEO, even before he takes the reins. The online provider is further accused of initiating private branding of products in direct competition with hosted sellers.

One area to watch is whether Jassy takes advantage of the leadership change to present a different persona for Amazon in the online world.  There are obviously a good number of skeptics that are indicating otherwise.

A further area to observe is Amazon’s ongoing relationship with workers among the provider’s warehouses, customer fulfillment centers and contracted logistics entities.

As Director of Operations, Dave Clark was a frequent Twitter user praising employee dedicated efforts during high order surge periods, yet the company has maintained a reputation of directly monitoring operational employee work quotas which includes digital surveillance and other practices. This has been part of Bezos’s manifested start-up culture, to foster maximum efficiency and output from employees.

The COVID-19 pandemic placed even more visibility to Amazon’s worker practices, especially in the early phases of virus spread when workers publicly complained of unsafe facilities, while at the same time being considered as essential workers by Amazon. The online provider was often closed lip to disclose any data related to worker infection rates, yet some employees turned to social media to voice concerns for worker safety, sometimes to their direct detriment.

In May of 2020, Tim Bray, who held the title of Vice President and distinguished engineer with the AWS business unit abruptly resigned because he no longer felt comfortable working for a company:

“…that’s comfortable firing whistleblowers with legitimate concerns.” It’s evidence of a vein of toxicity running through the company culture,” Bray wrote. “I choose neither to serve nor drink that poison.”

Bray reportedly gave up a one million plus salary becomes of his concerns warehouse worker demands for added virus safety measures, including the temporary closure of customer fulfillment centers for deep cleaning when workers test positive for coronavirus, along with added calls for paid time off for workers who are required to self-quarantine. An additional stated concern was calls from the company’s to up the company’s public commitments in climate policies and combating the effects of climate change. To Amazon’s credit, the provider has since become far more visible in supporting and funding additional worker safety measures and in demonstrating more active measures to invest in sustainability efforts. But this came after Bray’s public declaration to The Washington Post.

With the recent blowout financial performance quarters, and with the online provider more than ever garnering a reputation as one of the globe’s most profitable and powerful corporate entities, the looking glass into labor relations and corporate social responsibility is ever wider.

According to multiple published reports, current and former warehouse workers and industry observers continue to voice skepticism as to whether Jassy will influence a different labor relations perspective or continue with the current culture.

A new development concerns a formal labor organizing campaign that is now underway at the online provider’s Bessemer Alabama customer fulfillment center. The National Labor Relations Board (NLRB) ruled that employees at this facility can decide whether they seek to create a bargaining unit as part of the Retail, Wholesale and Department Store (RDWSU) labor union, and the actual balloting began earlier this month.

Organizing efforts and labor unrest directed at Amazon’s facilities are not a new phenomenon and the online retailer has taken a firm stand on resisting such efforts during past occasions. According to published reports, the company has hired the same law firm that previously helped to defeat a unionization drive in 2014.

A further aspect is that the new Biden Administration has fostered a more voice of labor stance during the recent Presidential election. According to a RDWSU estimate, upwards of 85 percent of the Bessemer workface is African American and Reuters has recently reported that the labor union has been in direct contact with the White House.

Both sides know of the significance of this latest election, and Jaffy can either inherit the consequences of a bitter election or work behind the scenes to ensure that the perception of Amazon as not actively listening to employee concerns is presented in a different light. Up to now, that effort has been in glitzy TV commercials and other media campaigns. The opportunity is direct outreach.

A final observation relates to some published beliefs that Jassy’s appointment could be a sign of Amazon’s intent to expand more aggressively into B2B online commerce or Cloud technology beyond existing initiatives. Our sense is that this is more dependent on the online provider’s global growth strategy. The online provider’s efforts in China, Western Europe, and currently in India have languished utilizing a formula approach. By many account’s Amazon international efforts have not been profitable. Jassy will likely need to revisit such efforts with a perspective driven by Cloud based information integration for certain B2B industry opportunities. Then again, some retailers and businesses, including arch competitor Walmart, have taken overt efforts to avoid the use of AWS to risk the compromising of detailed customer data related to buying patterns. Jassy himself has frequently indicated that AWS was designed to be separate from the company’s retail and other operations.

The key area to watch is whether Jassy begins to make overtures to investors on the benefits of AWS as a separate company.

The takeaway for this commentary is that in today’s business climate, no rapidly growing company can afford to maintain the same business culture and practices as the key to continued success. Global wide visibility in a period where many are beginning to question the corporate social commitment of high-flying tech companies is not something to dismiss. This pandemic has brought forth a more acute awareness to corporate social responsibility (CSR) practices, especially when companies and their high-profile executives have financially benefitted from the effects of the pandemic. Amazon like others, it does not exempt, and more high visibility public relations are not the formula. Thus, is the challenge for the new incoming CEO, as well as or soon to be Executive Chairman Jeff Bezos. With upwards of an amassed personal fortune of $200 billion, there are reports that Bezos will become more active in investing more aggressively in climate change and other social responsibility efforts in his next dimension of management. That is obviously noteworthy, but the new CEO will have his own challenges to demonstrate a changing company culture to meet changing times.