It has been a little over one-year since Amazon disrupted the natural and fresh food industry with its acquisition of Whole Foods. While many current one-year hence commentaries focus mainly on online customer impacts, Supply Chain Matters is of the belief that the evolving strategy thus far is one of augmenting supply network and distribution capabilities. 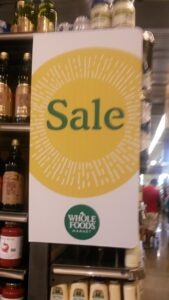 Introduction
It has been over a year since Amazon disrupted the retail grocery and natural foods retail sector in announcing its $13 billion acquisition of natural foods retailer Whole Foods.  In our initial Supply Chain Matters commentary reflecting on this acquisition, we declared:
“In the history of any industry, along with its associated supporting supply chains, there comes a seminal series of events that ultimately point to a major inflection point, one that clearly indicates that business-as-usual is no longer an option. For the food and grocery industry, and all of its supply chain stakeholders, the year 2017, in the second week of June, two thunderbolt events ignited a seminal industry change.”
The second thunderbolt event we were referencing was Kroger, one of the largest retail supermarket chains in the U.S., which that same week issued unexpected lowered earnings forecast for the year. The aftermath of this news caused the chain’s stock to drop by 19 percent, the steepest one-day drop for the company’s stock in more than 17 years. That development was a seminal jolt for Kroger’s senior management team.

Timeline Highlights
A variety of Wall Street and retail industry analysts have each weighed-in as to how the industry is faring one-year later. Many point to Amazon’s shrewd moves to provide Prime members added discounts while shopping for everyday items at a local Whole Foods outlet or ordering online. Some of Amazon’s branded electronic products are now physically on display at Whole Foods stores, along with the new presence of Amazon lockers for online customers to able to perform food shopping as well as pick-up or return Amazon online orders. There are efforts underway for testing and rollout free delivery and curbside pickup across select geographic markets and eventually nationwide.
A recently published advisory from Motley Fool cites industry data indicating that Amazon’s merchandising and selling strategies are thus far resulting in single digit increases in foot traffic among Whole Foods outlets, especially in urban locations, at the expense of smaller grocery and retail chains.  At the same time, as we have highlighted in other blogs, major U.S. competitors Kroger and Walmart have visibly stepped-up their investments in updated merchandizing and online customer fulfillment capabilities, and that has resulted in far more positive sales and revenue growth for both of these diversified retailer’s levels one year later. Target, also with a major presence in food retailing, reported one of its most positive financial performance and customer uptake quarters.
Kroger now offers free online pickup at over 1250 retail outlets and has begun testing direct ship to door. Kroeger also raised eyebrows of the technology world with the bold move to up its equity stake in United Kingdom based grocery robotics retailer Ocado Group. Ocado’s capabilities are in AI software and systems technology that power the online grocery retail platforms of Ocado.com, noted as the globe’s largest online-only grocery retailer. This technology was doubly noteworthy since it reportedly provides Kroger exclusive U.S. based access to the technology, which could limit access by other grocery chain competitors. That arrangement rings somewhat similar to Amazon’s 2012 acquisition of Kiva Systems in access to advanced warehouse automation and order picking robotics. Kiva’s technology was removed from the market and it has since been extensively deployed across multiple Amazon customer fulfillment centers.
Walmart has invested more in its retail fresh food merchandizing and selection, as well as integrated online capabilities. Online order and store pickup has expanded to a reported 1800 outlets thus far.

The Unfolding Strategy is Supply Network Investment
Since Supply Chain Matters is a medium focused on end-to-end supply chain capabilities for both B2B and B2C customer fulfillment, our belief is that the one-year report card for Amazon-Whole Foods has more to do with needed investments in overall supply network and distribution capabilities. Here are our evidence points.
Immediately after the acquisition closed, Whole Foods management elected to aggressively move forward with prior plans for implementing a more centralized inventory ordering and replenishment process for its retail network. By January of this year, reports of unplanned inventory stockouts at various retail outlets became far more visible, leading to empty shelves and dissatisfied customers and Whole Foods employees. Prior to the Amazon acquisition, Whole Foods was under enormous investor pressure to reduce costs, particularly those related to procurement and in-store inventory. In February of 2017, CEO John Mackey informed investors that the food chain was rolling out a company-wide “order-to-shelf’ (OTS) initiative designed to reduce individual store labor, excess in-store inventories and waste. We believed that this effort uncovered a number of weak links in the overall distribution supply network in an industry with a strong reliance on food distributors and brokers as key participants as well as stakeholders in such initiatives.
In our January 2018 blog we declared:
“As many food retailers and distributors are discovering, the implication for supporting customer online fulfillment is a significantly different logistics and distribution model. Online orders are about individual line item needs rather than bulk pallets and cases. It is about seamless flow-through logistics vs. inventory storage points, sometimes adding combinations of customer pull and supplier push focused planning and distribution.”
The above led us to focus more on United Natural Foods (UNFI), which was and is today, the prime supply distributor and broker for Whole Food’s inventory of national, local, or private branded food products.
In March of this year, business network CNBC referenced a small footnote in Amazon’s Annual Report that quantified the financial commitment being made to the grocery and natural foods segment, beyond the initial acquisition costs. Amazon reportedly took on an additional $22 billion in contractually obligated future purchase commitments. According to the report, that balance also appeared in Whole Foods securities filings, and is almost entirely tied to the natural foods chain’s contract with UNFI based on CNBC estimates and prior filings. Further reported was that the new supplier agreement extended to 2025, well beyond current grocery industry contract norms. The implication made was that Amazon has initiated a longer-term supply agreement to assure a supply pipeline for both online and in-store merchandising and inventory management needs.
Also, in March, Whole Foods conducted a supplier summit, the purpose being to reportedly smooth over supplier relations that have were frayed by pre-acquisition initiatives including the centralized inventory management system. Whole Foods had intentions for further assuming the role of a food broker and wanted to charge food producers a fee ranging from 3-5 percent of sales for such added services. Suppliers were not initially pleased with that effort, especially with a concern for taking more control of customer buying intelligence. That has led to ongoing supplier tensions and some fallout from smaller, local specialty foods providers.
In the area of financial performance post Whole Foods acquisition, UNFI’s net sales grew 9.2 percent in the company’s fiscal Q2, and 10.8 percent in fiscal Q3. Operating income declined 13.1 percent in fiscal Q2 due primarily to restructuring charges, while fiscal Q3 operating income reportedly increased 26.5 percent. Net income similarly has been healthy double-digit growth the past two quarters.
Then in July, UNFI announced a definitive agreement to acquire food and grocery distributor and retailer Supervalu for a reported amount of $2.9 billion, including the assumption of outstanding debt and liabilities.  This acquisition will be touted as a means to accelerate UNFI’s “Build Out the Store” growth strategy by broadening both its product distribution range and grocery retail customer base.  UNFI was further willing to pay a 67 percent premium over Supervalu’s closing stock price last in order to gain Supervalu shareholder approval. In addition to distribution to its owned stores, Supervalu supports upwards of 7000 independently owned and operated retail food companies in the supply of name and private branded foods.
Our Supply Chain Matters stated belief was that this strategic acquisition will provide Amazon-Whole Foods with added grocery staple product assortment available for both in-store or online order fulfillment needs. It further provides opportunity for broader distribution footprint across the heartland of the U.S. and provides opportunities to leverage and enhance technology, capacity, and systems of the combined distributor entities, to streamline processes and efficiencies, as well as reduce future capital investment needs. The fate of smaller, independent grocers now rests with UNFI and Amazon management teams.

Reader Takeaway
A year into the Amazon acquisition of Whole Foods, the unfolding strategy is in both in adding additional customer intelligence for food buying preferences and in strategic augmentation of the food supply and distribution network capabilities to support multiple fulfillment channels. Amazon has obviously gain knowledge from past acquisitions, providing less direct hands-on operational influence, but rather strategic understanding of needed supply, distribution, and logistics capabilities to support a new model of food retailing.