Commercial aircraft manufacturer Airbus continues to manage the weakest and most visible link in the widely popular A320neo supply chain, that being consistent shipments of the two options of high technology fuel-efficient aircraft engines. 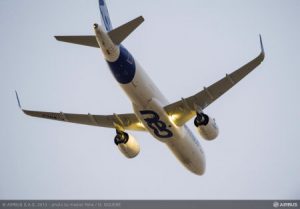 In a Supply Chain Matters late February commentary reflecting on Airbus’s 2017 full-year operational and financial performance, we called attention to the critical dependence on the two fuel-efficient aircraft engine suppliers., Pratt & Whitney and CFM International, the latter a joint venture of Safran and GE Aerospace.

With the closing of the Q1 quarter a mere one-week away, industry eyes remain on how each engine manufacturer is faring with Airbus production support needs.

A potential clue came from a report from Aviation Week & Space Technology indicating that some ongoing issues with Pratt’s geared turbo-fan (GTF) engines could potentially be addressed by the end of April. According to this report, re-delivery of the last of 55 repaired PW1100G engines affected by the recent knife-edge seal issue could be rectified by that time. Initial problems with the seal installed in GTF engines starting in mid-2017 began to surface in January, eventually prompting various air safety alerts with some grounding of operational aircraft.

With the entire impacted fleet expected to be into operational service by the end of April, the attention remains on Pratt’s efforts to support Airbus’s production schedule for new A320neo’s. Like what occurred in December, the likely scenario is the classic hockey-stick shipment scenario, with many completed aircraft queued-up on factory runways awaiting delivery and installation of required GTF engines to complete customer delivery commitments.

The problem has reportedly cost Pratt upwards of $50 million to resolve the knife seal issue in terms of allocating additional spare engines and added repair costs. According to the report, Pratt’s GTF program losses have risen to upwards of $1.2 billion to-date.

A quality issue with a low-pressure turbine disk has been reportedly resolved while partner General Electric has encountered problems with a turbine disk that has resulted in production setbacks.

Commenting on 2018 production plans, Airbus executives previously acknowledged the critical dependence on the two fuel-efficient aircraft engine suppliers for the highly popular neo models. Noted rather clearly: “The A320neo ramp-up remains challenging and requires that the engine suppliers deliver in line with commitments.” That statement will be of special significance in the weeks and months to-come. Airbus planners and production assembly work teams have their work cut out to maintain some semblance of consistent production cadence.