Airbus Does Indeed Deliver the First A350 Aircraft

Supply Chain Matters provides an update to a previous posting noting the previously reported delayed delivery of the first Airbus A350 XWB to launch customer Qatar Airways. Ten days ago, Qatar suddenly announced that it was delaying delivery of the launch A350 XWB 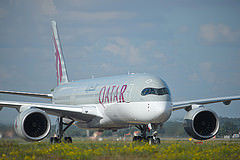 aircraft just days before scheduled delivery without citing a specific reason for the postponement.

Today, a published Reuters report now indicates that the aircraft was delivered today, 10 days later than original planned. The report further indicates that Qatar “had last-minute problems with one of the suppliers of the “buyer furnished equipment”- items like seats and galleys that the airline buys directly from third parties.” That report places a different slant on reports that were previously in business media.  The original news of the sudden Qatar delivery delay coupled with speculation regarding the potential termination of the A380 program caused Airbus stock to drop over 10 percent on the Paris exchange immediately after the announcement.

Regarding the A380, Reuters and The Telegraph had previously reported the head of another Airbus influential customer, Emirates, was one very unhappy customer upon hearing speculation that Airbus was considering a potential cancellation of the A380 program without consultation. Today’s Reuters report seems to place previous speculation totally to rest as the CEO of Airbus’s commercial aircraft unit declared earlier today that production of the A380 would continue, including the potential of adding new engines and a larger stretch configuration.

Our last commentary observed that in just one week, Airbus managed to get embroiled in openly communicated unhappiness among its top two most influential long-range, wide body customers, Qatar and Emirates. It seemed that product strategy was relegated to a public forum. Airbus seems to have now put all at-rest with today’s delivery and management statements.

Influential customers do have a very important voice in product development and delivery criteria.

Reports of Apple Testing a Smaller Tablet- Is This the Forerunner to an Expanded Global Distribution Strategy?