Supply Chain Matters continues with our streaming commentary focused on the globe’s currently most visible supply chains, specifically the two anchors of commercial aerospace supply chains.
Both Airbus and Boeing have reported operational performance in Q2 2018 and the numbers are much better than those in Q1. That stated, much more manufacturing and supply chain coordination work remains in scaling-up production volumes, particularly for Airbus.
Airbus
Q2 Customer Deliveries
European based Airbus, from our calculation, delivered a total of 183 aircraft in Q2. That was considerably better performance than the 120 aircraft delivered in Q1. The breakout of first-half, 2018 customer deliveries is as follows:

Note: In Q1, Airbus did not make its spreadsheet of deliveries available for downloading.
As has been noted in our Q1 operational performance commentary, most all of the variation relates to single-aisle aircraft deliveries, and specially the A320 neo series. Ongoing disruptions in the delivery of completed Pratt & Whitney GTF engines to support monthly production requirements has been an ongoing challenge thus far in 2018.  In February, Airbus was forced to temporarily ground all in-service A320neo aircraft because of leaking oil-seal performance issue. That forced Pratt to allocate more engines destined for new aircraft to replace impacted engines of operating carriers. Airbus had expected to resume scheduled planned deliveries for the A320neo aircraft with the Pratt GTF engine option in the May-June period, after previous operating engines were retrofitted with new seals.   Delivery issues concerning the alternative CFM International LEAP engine for the A320neo likely remained challenging as-well during the latest quarter, but not to the degree of the Pratt engines.
The ongoing weak link was ever apparent in the reported June delivery number, as a total of 41 A320/321 neo model aircraft were delivered in the final month alone. That was once again, a reflection of completed aircraft parked on nearby runways, awaiting the final delivery of the completed or reworked Pratt GTF engines.
Airbus’s stated 2018 goal is to deliver 800 commercial aircraft in 2018 but has qualified that goal to indicate a dependence on engine manufacturers making their commitments.  With delivery performance for the first-half of 2018 now at 309 aircraft, the European producer is tracking to but 39 percent of its stated 2018 year-end delivery goal. Obviously, a lot of make-up effort remains, especially for the two narrow-aisle neo version engine producers.  Any added operational issues related to in-service engines will also be a factor in the ability to meet second-half delivery performance needs.  For its part, Airbus’s executive and operational teams have acknowledged their current challenge, and efforts are underway to not only work with engine producers in ramping-up required volumes, but in assessing whether an additional narrow-aisle production line will be added.
Airbus operationalized a fourth narrow-aisle family final assembly line in Hamburg in mid-June. That facility is described as more flexible and includes the use of termed mobile tooling platform (MTP) that transports major aircraft sub-components with the assembly facility. Previous lines have fixed jigs for sub-section assemblies. The aircraft maker is also actively working on the feasibility of a fifth assembly line to be located insider the former A380 super jumbo maintenance hangar, also in Hamburg.  This proposed newer line is being characterized as a blueprint for a future aircraft production process that would augment other existing “legacy” described production systems. Concepts reported thus far point to a process where volume and automation-focused processes would produce higher volumes of aircraft and where aircraft customization to specific needs would be channeled to a separate process line. Volume lines would likely include more robotics to reduce current manual labor efforts along with more intelligent process controls that would reduce downtimes.
The above stated, Airbus must still aide and convince aircraft engine producers to make corresponding process automation and volume output improvements including added capacity.
As of the end of Q2, Airbus reported total order backlog of 7168 aircraft, the equivalent of 9 years of production at current manufacturing and supply chain output volume. Total unfilled orders through the end of Q1 was reported as 7189 aircraft, of which, over 85 percent were in the A320 single-aisle category.
Net New Orders
Airbus reported net new orders of commercial aircraft of 210 aircraft as the end of June 2018. Of that number, 74 percent of net new orders were for single-aisle aircraft. Within that single aisle category, 80 percent of net new orders were for the neo powered models.
The European aerospace manufacturer had announced a price increase in January.
Other Airbus Related News
At the end of June, Airbus unveiled the A220 aircraft branding, the result of the October 2017 announced strategic market 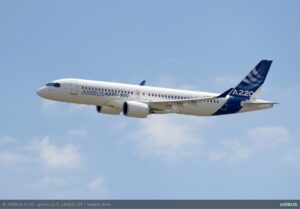 ing and operations management partnership with Bombardier’s C-Series aircraft group. The A220 and A230 aircraft are now the former Bombardier regional C220 and C230 aircraft models, now available for selling opportunities from joint Airbus and Bombardier commercial aircraft sales teams.
Earlier this week, U.S. based JetBlue Airways announced that it would acquire 60 A220-300 aircraft, along with options to acquire 60 additional aircraft. The deal was valued at around $5 billion at list prices. Delivery of the first 5 aircraft is expected in 2020 with the remainder of deliveries extended through 2025, as Airbus ramps-up production at the designated Airbus Mobile Alabama final assembly facility.
In its decision, JetBlue reportedly considered upgrading or replacing its existing fleet of smaller regional single-aisle Embraer jetliners. Likely, price, performance and earlier delivery may have played a weighting factor in the decision to go with Airbus.

In Q1, Boeing reportedly experienced delays in the deliveries of CFM International LEAP engines used to power the 737 MAX model but has managed to keep momentum of customer deliveries related to standard model 737 aircraft progressing.
Boeing had previously indicated plans to boost single-aisle 737 production levels from 47 per month to 52 per month during 2018, and first-half delivery performance would indicate the need for a more stepped-up effort for the second-half of the year.   As we pointed out in  prior commentary, 737 production slots are reportedly sold-out until the 2022-time period.
At mid-year, Boeing remains in a much better position to achieve or exceed its overall 2018 aircraft delivery goals. Many may speculate as to why, and we will defer that topic to a later commentary.

Net New Orders
Boeing reported 2018 net new orders to be a total of 460 aircraft on June 30th, over double that of Airbus. Of that total, 319 aircraft orders, or 69 percent, were in the 737 single-aisle category.
Total customer orders backlog for Boeing through the end of June 2018 was reported as 5876 compared with 5835 aircraft orders reported at the end of Q1.
Other News
On July 5th, Boeing announced the signing of a Memorandum of Understanding to establish a strategic partnership with aircraft manufacturer Embraer that positions both companies to accelerate growth in commercial aircraft markets. The non-binding agreement proposes the formation of a joint venture comprising the commercial aircraft and services business of Embraer that would strategically align with Boeing’s commercial development, production, marketing, and lifecycle services operations.
Under the terms of the agreement, Boeing will hold an 80 percent ownership stake in the joint venture and Embraer will own the remaining 20 percent stake. Plans indicate that on finalization, the commercial aviation joint venture will be led by Brazil-based management, including a President and Chief Executive Officer. Boeing will have operational and management control of the new company, which will report directly to Boeing’s CEO. The announced plan requires government approvals and reportedly is not anticipated to close until late 2019. Until then, Boeing cannot market nor sell any Embraer aircraft.
The move was initiated as a strategic response to Airbus’s earlier consummated strategic partnership with Bombardier noted earlier in this commentary. Boeing had previously challenged Bombardier in a U.S. International Trade Commission action for selling its C-Series aircraft at below production and market competitive pricing. The Commission later ruled against Boeing, specifically citing that Boeing had no viable competitive offering in the regional aircraft segment and thus was not economically harmed.
Q2 Takeaway Industry Assessment
As in our Q1 operational performance commentary, commercial aircraft industry supply chains remain in a conundrum of multi-year order backlogs yet supply chain participants continue to be challenged with the need to ramp-up monthly production levels involving more technologically advanced components.
Commercial aircraft supply chains will likely run into more potholes in plans to scale-up monthly production volumes because OEM manufacturers need to satisfy investor interests for greater short-term margins and profits. Manufacturers continue to demand supply chain price concessions and efforts to move some component production in-house. That in-turn, has driven noteworthy M&A activity among major aerospace component providers to achieve more bargaining influence with OEM manufacturers.
Compounding this ramp-up is the obvious weakest and complex link, that being the ability of aircraft engine suppliers’ to be able to support higher production volumes and still attain desired margins. That remains a work-in-process that is likely to play-out for many more months.
Bob Ferrari
© Copyright 2018. The Ferrari Consulting and Research Group and the Supply Chain Matters® blog. All rights reserved.