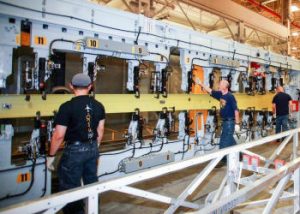 Many industry and investors eyes were focused on the new A320neo aircraft which has proven to be a huge seller for customer bookings but continues to experience production challenges related to the supply of Pratt & Whitney’s new PW1100G geared-turbo-fan aircraft engines. In an operational review conducted in February 2015, Airbus made supply-chain wide plans to target a production rate of 50 A320’s per month by early 2017 but operational performance to-date for the single-aisle family does not reflect that current performance.

Airbus delivered 59 of the brand new neo version during the first-half, amid a target goal to deliver 200 of the new more fuel-efficient aircraft this year. The new engine option (neo) features an airline choice of two available, new fuel efficient aircraft engines, either the Pratt & Whitney geared turbofan (GTF) engines or the CFM International alliance of General Electric and Safran LEAP engines. The Pratt engine was added to production in Q3-2016 while the CFM International engine is now being supplied to designated customer shipments.

Customers are still experiencing a number of in-service operational issues specifically with the new Pratt GTF engine which has caused Pratt to modify its production shipping schedules because of operational and production fixes. In the first-half operational report, Airbus executives have become more candid reflecting that the 200-year-end goal is becoming more challenging. Airbus recently indicated to Aviation Week: “While Prat & Whitney has delivered some fixes, these have not yet come through on a reliable basis under normal service conditions.” Because of the in-service operating issues, Pratt has been compelled to allocate some finished engines to act as spares for in-service engines needing premature, off-wing maintenance. Reports however indicate that airlines operating the new Pratt engine are pleased with the engine’s fuel savings.

On a positive note, Airbus has made demonstrated improvements in delivery performance of the newer wide-body A350, with 30 of the aircraft delivered in the first-half, compared with a mere 12 in the year ago first-half. A series of supply chain challenges related to seat, lavatory and cabin fixtures manufacturing surrounded 2016 production performance. Airbus indicated to investors that supply chain bottlenecks for the A350 are improving.

In the area of booked customer orders, Airbus reported 248 net orders, the majority of which (212) were in the single aisle category. That included 92 net new orders for the A320neo family aircraft.

Boeing reported a total of 183 aircraft delivered to customers in Q2, consisting of 123 737 models, 33 787 models, 21 777 models, three 767 models and three 747 models. The Q2 2017 number was lower than 199 reported in the year-ago quarter, but Boeing executives communicated to investors late last year that overall production levels in 2017 would be reduced. Having delivered a total of 352 commercial aircraft in the first-half, Boeing still expects to deliver 765 aircraft in 2017.

Similar to Airbus, airline customers have shown keen interest in the newer, more fuel efficient single aisle aircraft, and in the case of Boeing, it is the 737 MAX model. In May, days before the first scheduled customer delivery, Boeing had to suspend ongoing flight testing after being notified by the engine supplier of an engine component manufacturing problem. Engine provider CFM International indicated a “quality concern” related to the low-pressure turbine (LPT) discs installed within the new CFM LEAP-1B engines. A collection of five LPT discs with attached blades sit at the rear of this new, more fuel-efficient engine.  CFM has generated a lot of effort to correct the problem but Q2 featured the shipment of just five of the new aircraft. According to various industry reports, Boeing expects the MAX variant to make-up 10-15 percent of the more than 500 737 model aircraft to be delivered in 2017. Obviously, more work and supply chain attention will be focused on 737 MAX production in the second-half.

Ongoing delivery reductions in the older 777 have been pre-planned over the next two years in order to prepare for the transition to the new 777X family of aircraft currently scheduled for deliveries staring in the 2019-2020 period. Boeing sales teams have been successful in selling out the remaining 777 production slots.

Earlier this month, Boeing CFO Greg Smith indicated to an investor conference that: “Business as usual isn’t going to cut it” referring to ongoing efforts by Boeing to insource some production previously provided by suppliers. Smith indicated: “We see a lot of runway ahead of us and there are inefficiencies across the board.” Further re-iterated was the somewhat contentious message that insourcing and ongoing supplier cost reduction efforts are a “win-win” for all of Boeing’s supply chain ecosystem. That is obviously great for Boeing shareholders in terms of top-line revenue growth needs, perhaps not so for existing aerospace supply chain suppliers.

In late July, the company announced that it was creating a new avionics and electronics unit as a component of its insourcing strategy.  This new Boeing Avionics business unit will focus on areas such as navigation and flight controls for future commercial aircraft models. The move follows prior announcements by Boeing to garner added revenues in after-market services and repair parts by creating a more independent Services business unit.

Despite thousands of backlogged customer orders extending for years, the two most prominent commercial aircraft manufacturers approach production output from different perspectives. Each struggle with the most dependent yet vulnerable weak link in the supply chain, that being breakthrough designed new aircraft engines promising highly improved fuel efficiencies but newer designed materials as yet unproven for large volume production. In the specific case of Boeing, increasing pressures on supplier cost reductions and ongoing decisions to perform more supply chain insourcing, all for the sake of increased Boeing shareholder returns, are adding new tensions and dynamics to the broader aerospace supply chain ecosystem.