Supply Chain Matters continues with our ongoing commentary regarding both Airbus and Boeing production and supply chain performance in their respective commercial aircraft units. With Q3 and first nine-months operational performance now reported, it’s becoming clear that supply chain vulnerabilities for Airbus, are becoming more visible, potentially threatening annual operational and financial performance objectives. Boeing, on the other hand, although spared from engine delivery challenges up to now, may face some challenges in 2018.

For this blog commentary, we will first begin with Boeing.

Boeing reported a total of 202 commercial aircraft delivered in the July thru September quarter with the breakdown consisting of 145 of the single-aisle 737 family models, 35 of the 787 family, 16 of the 777 family, 4 of the 747 and 2 of the 767-model aircraft. The Q3 delivery number was an increase of 19 aircraft from the 183 reported in the prior Q2 performance. Year-to-date, Boeing has delivered 554 aircraft toward its expected goal to deliver 765 aircraft in 2017. That equates to delivering 211 aircraft in the final quarter which appears to be quite doable.

Airline customers have shown keen interest in the newer, considerably more fuel-efficient aircraft powered by more technologically advanced aircraft engines. In the case of Boeing, that equates to the 737 MAX model, which has garnered firm orders for 3900 aircraft to-date, from 91 customers, representing Boeing’s fastest selling aircraft. The MAX began initial deliveries last quarter, but Boeing was only able to deliver 5 of the aircraft in Q2 due to a last-minute quality issue with CFM International’s LEAP-1B engines. That concern was related to the low-pressure turbine (LPT) discs within the engine.  Boeing subsequently went ahead with first customer ship to launch customer Southwest Airlines.

Supply Chain Matters was not able to determine how many 737 MAX models were delivered in Q3 since that number was not reported as far as we can determine.

Airbus delivered a total of 147 aircraft in Q3, somewhat below the 171-aircraft delivery performance recorded in Q2. The Q3 breakout consisted of 110 single-aisle A320/A321 models, 20 of the large body A350 model, 14 of the A330 and 3 of the super-jumbo A380. With a cumulative 454 aircraft delivered by the end of Q3, Airbus faces a significant challenge in meeting its year-end aircraft delivery goal of 700 aircraft. The stark reality is that Airbus’s production and supply chain management teams are tasked with facilitating the delivery of 246 aircraft in the final quarter. Airbus has in-essence a classic hockey-stick delivery challenge that brings out the best in war room dynamics.

The primary broken link in the Airbus supply chain is now clearly visible, that being the new Pratt and Whitney PW100G g 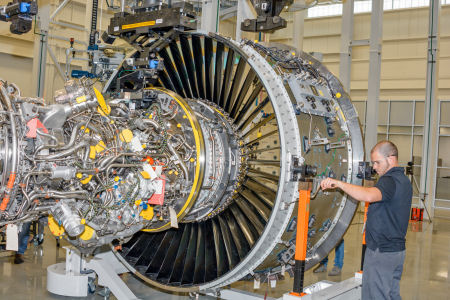 eared-turbo fan (GTF) engines that are part of the very popular A320 neo (new engine option) model.  Supply Chain Matters has noted in prior commentaries the various premature quality and component engineering design issues that have existed in certain parts of the engine. Initial A320 neo airline customers operating these engines continue to experience pre-mature performance issues that require that the engines be removed for unplanned off-wing fixes.

Airbus is not the only manufacturer impacted by Pratt engine unplanned maintenance issues. Bombardier’s new C-Series aircraft have the PW1500G GTF engine as the sole engine option and has also had to deal with engine available challenges since 2016. Pratt has since agreed to a revised delivery schedule for supporting the ability for Bombardier to deliver 30-35 aircraft this year, most of which are skewed toward year-end.

The European based aircraft producer had plans to deliver upwards of 200 neo powered A320/A321 models in 2017 but only 90 had been delivered by the end of Q3.  Pratt has had to allocate a larger number of planned finished GTF engines as spares for existing operating engines needing the off-wing fixes. Reports that we have read indicate that Airbus had as many as 40 mostly-completed aircraft parked in storage areas during Q3 awaiting the delivery of the designated Pratt engines. To its credit, Airbus reportedly instructed Pratt to prioritize any of its planned final-assembly bound finished GTF engines to A320 neo airline operators who may have required additional engine spares. In other words, power by the hour leasing and maintenance plans do have meaning for revenue flows.

In its Q3 financial performance briefing to shareholders, Airbus clearly communicated that operating performance for the first nine months and the full year are affected by ongoing engine delivery delays. Both Airbus and Pratt have expressed confidence that most of the GTF engine issues will be resolved in early 2018. That is important since A320 neo production is scheduled to be a higher proportion of overall A320 deliveries.

There may be yet another challenge percolating with the second engine option for the neo, namely the CFM International LEAP-1A engine. As one Aviation Week publication recently noted: “With all the attention paid to Pratt & Whitney’s problems with the geared turbofan this year, some have overlooked the early hiccups of its rival CFM LEAP.”

The hiccups in question relate to premature loss of coating on the high-pressure turbine shroud produced by CFM partner General Electric on some of the LEAP engines.  Similar to the Pratt situation, Airbus has directed CFM to provide completed LEAP engine spares to airline operators who require additional spares for unplanned off-wing maintenance.

Recall earlier when we mentioned early issues that Boeing encountered with low-pressure turbine discs of the LEAP-1B. Reportedly, the premature loss of thermal coating on the high-pressure turbine discs also effects the 1B version as-well, meaning that Boeing is likely dealing with similar challenges in planning finished engines, but that has not been acknowledged by Boeing.

Indeed, a supply chain is only as responsive as its weakest link, and as many in the industry suspected, the weakest link is turning out to be the revolutionary new aircraft engine designs from certain manufacturers.