Both Airbus and Boeing have reported on operational performance and exited the March 2018 quarter showing signs of supply chain strains, but Airbus is dealing with the most significant challenge. 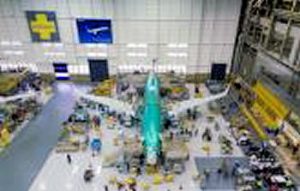 European based Airbus reported the delivery of 120 aircraft in Q1, 45 percent below that of Q4-2017 delivery volumes. That may not be an apples to apples comparison in that Airbus’s Q4 performance represented an all-out performance to achieve total 2017 year-end performance objectives. Nearly 45 percent of reported customer deliveries were accomplished in the month of March, a strong indicator of a supply chain hockey-stick disruption that continues with the single aisle A320 aircraft.

As we pen this commentary, the detailed spreadsheet numbers depicting Q1 monthly customer deliveries was not available on the Airbus web site, thus we could not compare Q1’s detailed monthly performance data with prior quarters.

Industry media continues to report aircraft engine delays related to the A320 neo family of aircraft. As Supply Chain Matters and industry media noted in a February commentary, deliveries of the newly developed Pratt and Whitney PW1100G geared-turbo fan engines were suspended in February due to operational issues related to a new type of seal installed on the turbine blades. Initial problems with the seal installed in GTF engines starting in mid-2017 began to surface in January, eventually prompting various air safety alerts with some grounding of operational aircraft. Airbus suspended the deliveries of new GTF engines in February and elected to return 55 engines to Pratt for modification rework. This lot of engines was expected to be returned to Airbus by the end of this month, but CEO Tom Enders has now indicated that Airbus will resume deliveries of highly popular A320neo aircraft with the Pratt GTF engine option in the May-June period instead.

Airbus’s stated 2018 goal is to deliver 800 commercial aircraft in 2018 but has qualified that goal to indicate a dependence on engine manufacturers making their commitments.  With Q1 performance logged, a lot of make-up effort remains.

Meanwhile, Boeing reported total Q1 customer deliveries of 184 aircraft, of which 132 were the single-aisle 737 family of aircraft. Boeing has reportedly experienced similar delays in the deliveries of CFM International LEAP engines used to power the 737 MAX model but has managed to keep momentum of customer deliveries related to standard model 737 aircraft progressing. Boeing had previously indicated plans to boost 737 production levels from 47 per month to 52 per month during 2018, and Q1’s single aisle performance seems to be an indicator of moving in that direction.  As we pointed out in our prior commentary, 737 production slots are reportedly sold-out until the 2022-time period.

For all Q1, Boeing reported customer deliveries in the following categories:

Airbus reported net new orders of commercial aircraft to be 45 aircraft, considerably below its rival. The European aerospace manufacturer had announced a price increase in January.

Total unfilled orders through the end of March 2018 were 7189 aircraft, of which, over 85 percent were in the A320 single-aisle category.  That number reflects a growing trend by airline and operating customers in preferring more single-aisle aircraft. With a growing multi-year backlog, reports indicated that Airbus is now evaluating the feasibility to boost single-aisle aircraft monthly production levels to more than 70 per month from current levels. Prior plans were to ramp single-aisle production to 63 per month by 2019. The obvious Achilles heel is the ability of the two A320neo model engine manufacturers’ ability to be able to support such levels on a consistent basis. Much planning remains.

Compounding the current supply chain disruption related to specific engine manufacturers is that conventional A320 sales, without the advanced engines, are trending higher than originally expected.

Boeing reported net new orders of aircraft to be a total of 221 aircraft in Q1, a considerable achievement. Included in the numbers was an order from parcel carrier UPS for 18 air freighters and an order from Turkish Airlines for 25 787’s.

Not reflected in the Q1 net orders was last week’s announcement of a huge order from American Airlines that called for the acquisition of 47 new 787 Dreamliner aircraft, valued t more than $12 billion in list prices and scheduled to be delivered in the 2020-time period. This was a reported hotly contested order involving Airbus which was offering long haul versions of the A350 and A330 to American.  In the end, American publicly indicated that its decision was motivated by a need to standardize its fleet, which already will consist of 35 Dreamliners. Supply Chain Matters suspects price was an issue as-well.

Total unfilled orders for Boeing through the end of March 2018 was reported as 5835 aircraft of which 4856 were in the 737 single-aisle category.

Compounding this ramp-up is the obvious weakest and complex link, that being the ability of aircraft engine suppliers’ to be able to support higher production volumes and still attain desired margins. That remains a work-in-process that is likely to play-out for many more months.

The ultimate impacts of Brexit in terms of trade and currency loom large for this industry over the next 12-24 months due to the existing concentration of component suppliers within the UK.

Finally, the more obvious and hotly contested industry dynamic revolves around which product value-chain participants will benefit from the more profitable 15-20-year cycle of service and repair parts revenues that typically come which each in-service aircraft. Both Airbus and Boeing are moving toward efforts to gain more direct influence in services management. This issue alone merits a separate blog commentary.