Trade representatives of Canada, Mexico and the United States completed another five days of NAFTA re-negotiation talks this week which were hosted by Mexico.  After this fifth round, the overall mood of these talks remains far less optimistic for a successful overall outcome. 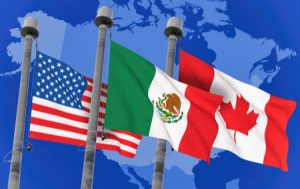 As Supply Chain Matters has noted in prior blog stream commentary, new U.S. proposals regarding revised U.S. sourcing content for automobile and other manufacturing raising the threshold to 85 percent, an alternative means for arbitration of trade disputes other than the existing Chapter 19 process, tenets restricting Canada, and Mexico’s ability to bid on U.S. infrastructure and defense procurement needs along with the introduction of a clause that would force a five-year rolling sunset for the ongoing NAFTA trade pact, unless all three countries agree to renew, have each become major stumbling blocks. The U.S. term of “rebalancing” is a reflection of these proposals introduced in the third round. From our lens, they are a reflection of a win-lose negotiating stance that cannot sit well in a highly politically charged trade pact negotiating process.

The ongoing timetable calls informal meetings among mid-level negotiators in December with another formal round of negotiations planned for late January next year.  The original goals were to reach overall agreements in-principle by the end of this year. That goal was revised at the end of the fourth round to March 2018. At this point, many question whether the March milestone can be achieved. In our prior NAFTA focused blog commentary, we highlighted remarks from U.S. Commerce Secretary Wilbur Ross indicating that Canada and Mexico had more to lose with a collapsed NAFTA agreement. Mr. Ross further indicated that the likely result was that Canada and Mexico will “come to their senses and make a sensible deal”

In its latest reporting of this week’s fifth round conclusion, The Wall Street Journal again reports that U.S. business groups have ramped up lobbying and public relations efforts to counter the current Trump Administration current hard NAFTA stance, pointing out the dire impacts of a collapse of this trade pact. Failing that, trade groups are appealing to the Republican Party dominated U.S. Congress to “reign in the President.”

As we continue to emphasize, NAFTA’s role as a cohesive North America supply chain ecosystem of multi-industry trade flows is subject to a lot of uncertainty in the coming months as the three country stakeholders call each other’s bluffs. Industry supply chain teams can hope for the best outcome but at the same time, should be prepared to respond to various other outcomes in the coming months of 2018.