In late January, we alerted Supply Chain Matters blog readers to published reports indicating that global contract manufacturer Foxconn, (Hon Hai Precision Corp.), the new parent of Sharp Corp. was evaluating a potential $7 billion investment in a new LCD manufacturing facility to be in the United States. Our takeaway at the time was that if this investment did indeed occur, it would represent a significant milestone for the high-tech and consumer electronics supply chains. We believed that the plant investment would further have a linkage to Apple’s future production needs. 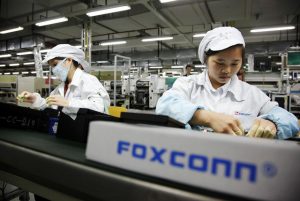 Since that time, there have been various reports indicating on and off again negotiations with individual U.S. states. In late June, we updated readers to an Associated Press published report citing an informed source, indicating that Foxconn’s proposed U.S. factory might have a Wisconsin address and that active negotiations with state officials was occurring. The report indicated that the state of Michigan was also a possibility.

This week, The Wall Street Journal, again citing informed sources, reports that Foxconn’s decision on a location is imminent and could be announced as early as this week. The location for the major investment is once again noted to be the State of Wisconsin, the home state of U.S. Speaker of the House of Representatives, Paul Ryan. Further reported by the WSJ was that in addition to Wisconsin, Foxconn is evaluating the Detroit Michigan area for a possible additional plant investment although it is unclear as to what specifically would be manufactured at the Detroit facility. Once again, the WSJ cautions that a final decision has not been made and that there could be last-minute changes. Indeed, previous reports had such an announcement timed to the prior visit of China’s Premier to meet with President Trump.

In addition to the reports concerning Foxconn, there has been other separate news and rumors originating from various Asian news sources indicating that Apple is actively considering investing in its own OLED screen technology production to limit the company’s current dependency on major LCD suppliers Samsung Electronics and LG Display.  Samsung is reported to be the current sole supplier of new OLED technology to be new iPhone 8 model currently in the new product introduction phase, and rumored for release later this year. With Foxconn being Apple’s de-facto prime contract manufacturer, this other news may imply that Foxconn’s potential U.S. investment would be to establish in-house supply of OLED screens for future iPhone models as well as to other U.S. based display component needs. This establishes further credence to Foxconn Chairman Terry Gau’s recent statement to shareholders:

“This time we go to America, it’s not just to build a factory, but to move our entire supply chain there.”

Again, all of this is speculation but increasingly plausible at this point.

Indeed, such developments represent a very big deal for high-tech and consumer electronics supply chains, and specifically Apple’s supply chain, along with that of U.S. Based automotive brand owners that increasingly feature more high-tech electronics, autonomous driving features and visual displays in future automobile models. The pieces of such strategies seem to be falling into place.

We will all know more soon.

Supply Chain Disruption- A Fried Chicken Crisis Across the UK