This week, Anheuser-Busch and Nikola Motor Company have jointly announced an order for up to 800 hydrogen-electric powered Nikola Two semi-trucks. The announcement follows a prior commitment from trucking carrier U.S. Express to reserve up to 1000 of the company’s sustainable fueled trucks.
This announcement is significant from two dimensions. It serves as a market endorsement of hydrogen-electric powered Class 8 trucks as a preferred strategy for sustainable-powered heavy-duty vehicles for long-haul transportation services. The announcement further adds credence to investing in an industry disruptor that has definite manufacturing and infrastructure plans. 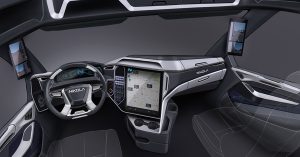 According to the announcement, Anheuser-Busch aims to convert its entire long-haul dedicated fleet to renewable powered trucks by 2025. Nikola is further partnering with the beer maker to deploy 28 hydrogen stations along the travel routes of Anheuser’s dedicated fleet. Nikola itself anticipates having over 700 hydrogen stations deployed across the United States by 2028.
We first alerted Supply Chain Matters readers to privately-held Nikola Motors being a disrupter in the heavy-duty truck segment in a June 2016 blog. Like electric car manufacturer Tesla, even before the first prototype truck was produced, Nicola’s founder indicated that the manufacturer had initially booked 7000 reservations, each accompanied by a $1500 deposit, totaling more than $2.3 billion in cash, at the time of announcing the Nikola One truck., Nikola Motor has now secured upwards of $9 billion in pre-order reservations.
The original design called for a purely battery powered electric truck, but that design has since morphed to a combination of lithium-ion and hydrogen fuel cell powered technologies. Its planned trucks call for 2000 ft. lbs. of torque, up to 1000 horsepower and can travel between 500 to 1000 miles before requiring a re-fueling. Refueling time is stated as 15 minutes.
Rival industry disruptor Tesla garnered a lot of visibility over its November 2017 announcement of the Tesla Electric Powered Class 8 truck which was followed by a series of reservations from a number of transportation providers and logistics distribution units. Initial names included Walmart and J.B. Hunt Transport, as well as a reservation from Anheuser for 40 of the trucks. Thus far, many of the reservations related to the Tesla truck imply shorter-haul point-to-point distribution use.
Tesla indicated the electric-powered tractor will run up to 500 miles on a single charge along with incorporating Tesla’s semiautonomous auto pilot driving system which could allow a collection of trucks to travel in guided convoys. Availability of this truck was indicated as sometime in 2019, but Supply Chain Matters voiced concern relative to that aggressive timeline milestone. We questioned whether adding another set of manufacturing challenges to a company and supply chain ecosystem that does not need more on its current plate. It is obvious that Tesla has not as-yet mastered the challenge of ramping Model 3 production as originally planned. The auto producer further remains cash-constrained to fund capital for a product that has far different production requirements.
On the other hand, Nikola announced plans in February to construct a $1 billion manufacturing hub to produce its hybrid battery and hydrogen-powered Class 8 semi-trucks. According to the announcement, a 500-acre facility to be in Phoenix Arizona and would represent one of the largest standalone manufacturing facilities to produce next-generation alternative-fuel powered truck vehicles. The Wall Street Journal also indicates that Nikola has filed a $2 billion lawsuit against Tesla claiming infringement on several of Nikola’s truck design patents including the wrap-around windshield. However, Nikola CEO Trevor Milton has indicated that his company does not seek an adversarial relationship but must protect its intellectual property.
Our View
From our lens, this week’s announcement serves as a meaningful endorsement in a hybrid powered Class 8 truck that can support needs for longer-distance heavy hauling as well as accommodate reasonable re-fueling times. Nikola has done its homework regarding addressing the unique operational performance needs of longer-haul surface transportation, including the deployment of fueling infrastructure, while adding the advanced technology potential of electronically connected and autonomous navigation.
Traditional Class 8 truck manufacturers are dealing with the largest surge of new truck order backlogs since 2006. According to a report today from the WSJ, that implies plenty of existing work for the remainder of this year. That provides and advantage for industry disruptors such as Nikola and Tesla to accommodate the next generation of far more efficient, sustainably-powered vehicles.
Another rather important consideration, especially to the supply chain and transportation management community is the ability to deliver to stated timeline commitment to product design, supply chain and expected delivery commitments. Thus far, Nikola is taking the necessary steps to have a manufacturing and infrastructure deployment capability in-place to accommodate customer milestones.  While Nikola is not immune to setbacks, it does not have the current cash burn and manufacturing ramp-up burdens of rival Tesla. With this week’s announcement concerning Anheuser, this start-up also has more customer reservation intent.
Bob Ferrari
© Copyright 2018. The Ferrari Consulting and Research Group and the Supply Chain Matters® blog. All rights reserved.

Reports of Additional Consolidation in Asia-Pacific Based Ocean Container Shipping