A Disruptor is About to Enter the Heavy Truck Equipment Market

Supply Chain Matters has provided our readers visibility to emerging industry disruptors who are leveraging advanced technology and platforms directed at supply chain related business process and asset needs.  Such visibility included the entry of Uber and Lyft and their potential to move beyond people transportation.

We now bring visibility to Nikola Motor Company and its ongoing development of a Class 8, 2000 horsepower electric powered semi-tractor truck that will be named the Nicola One. 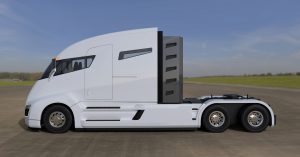 According to this manufacturer’s founder, the name Nicola was named from electrical engineer Nikola Tesla, whose last name is now affixed to one of the most visible automotive industry disruptors.  Similar to electric car manufacturer Tesla, even before the first prototype truck is produced, Nicola’s founder indicated last week that the manufacturer has booked 7000 reservations, each accompanied by a $1500 deposit, totaling more than $2.3 billion in cash.  Any tractor-trailer fleet manager will probably view $1500 as a pittance sum when considering the purchase of a Class 8 semi-tractor truck.  None the less, the fact that 7000 organizations are willing to queue-up in line, with five months remaining until physical product unveiling, indicates something special in product development.

Founder and CEO Trevor Milton indicates that Nicola’s technology is 10-15 years ahead of any heavy equipment truck manufacturer in fuel efficiencies and emissions.  According to the firm’s web site, the Nikola One will feature 4 times the horsepower, 2.2 times the torque and twice the miles per gallon of a standard diesel powered Class 8 tractor. Acceleration from zero to 60 miles per hour under load is claimed as 30 seconds, twice as fast as an average diesel powered vehicle.  The vehicle features six-wheel drive, allowing the vehicle to both push and pull loads. With 6X6 regenerative braking and air disk brakes, the combined electric and compressed natural gas (CNG) powered semi-truck claims to stop nearly two times faster than any other semi- truck on the market – cutting stopping distance in half.

Once more, this upstart is offering a compelling opportunity that will allow owner-operators and fleets to get into a new Nikola One and know their total cost of ownership every single month, regardless of fluctuating fuel costs and miles driven. The Nikola Complete Leasing Program will offer unlimited miles, unlimited fuel, warranty and scheduled maintenance, all for only $5,000 per month. Then for no additional cost, tractor-trailer fleet operators’ can trade-in for a new Nikola One every 72 months or 1,000,000 miles, whichever comes first. Whether a customer drives 8,000 miles per month solo or 16,000 miles per month as a team, total fuel cost is covered by Nikola. Tax, title and license not included.

As noted in a recent press release, the average diesel truck burns over $400,000 in fuel and racks-up $100,000 in maintenance costs over a million miles, and Nicola claims these costs are eliminated with its lease program.

That seems to be quite a compelling financial proposition, hence the current pent-up interest. Class 8 truck sales have been very depressed of-late because operators have been very reluctant to invest large sums of investment in new trucks with the current financial dynamics of fleets and today’s lower cost of fuel.  Nikola could add a whole new dimension, but obviously, has to convince transportation operators that the technology indeed performs as claimed and what Tesla is generating for customer advocacy, Nikola can do the same among a highly conservative lot of buyers.

There has long been skepticism as to whether anyone could develop a compelling electric powered heavy duty truck. It is only a matter of time before a manufacturer addresses such skepticism and it seems that Nikola is positioning itself to be that manufacturer.

Obviously, this is a manufacturer to watch over the coming months.  The company indicates that it has completed a seed round of funding and is working of a milestone of $300 million in round A funding to be completed by the truck’s initial launch, which is currently targeted for early December of this year.

Sustainability efforts could well get a huge boost is this technology does come to market.  Then again, with all of the advanced hype and pre-orders, other established manufacturers may have something to say or an action to initiate regarding such a disruptive technology.

© Copyright 2016 The Ferrari Consulting and Research Group and the Supply Chain Matters® blog. All rights reserved.